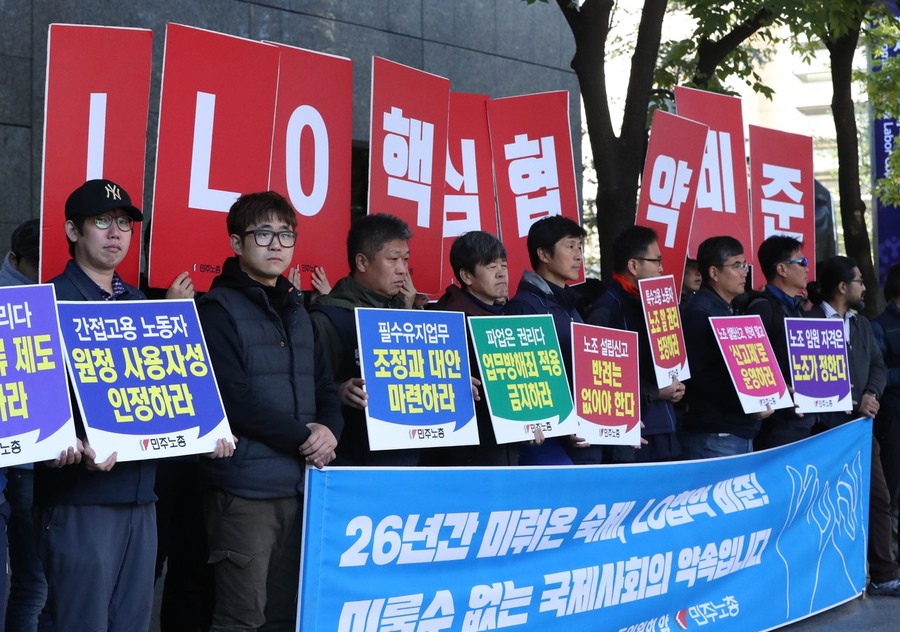 S. Korea to become global test case in its trade dispute with the EU By Jeon Jong-hwi

The European Commission’s request on July 4 to convene a panel of experts in its dispute with South Korea over labor issues means that South Korea is becoming a major global test case – and not in a positive sense. It is the first of the parties with which the EU has a Free Trade Agreement (FTA) to proceed as far as panel of expert procedures, which represent the final stage of the resolution of disputes concerning violations of labor conditions.

The key issue is the fact that the South Korean government has so far failed to ratify four of eight International Labour Organization (ILO) core conventions as pledged to the EU, even after the FTA between the two sides went into effect in July 2011. South Korea has not ratified Conventions No. 87 and 98 concerning freedom of association or Conventions No. 29 and 105 concerning forced labor. On Dec. 17 of last year, the European Commission announced that it was initiating dispute resolution procedures against the South Korean government. In addition to the issue of the four conventions’ ratification, the EU also raised an issue at the time concerning failure to honor the ILO’s “Declaration on Fundamental Principles and Rights at Work” from 1998, which South Korea also promised to abide by in the agreement. Additionally, the EU alleged violations with the excessively narrow scope of the “worker” concept in the Trade Union Act, which excluded individuals in “special employment” categories; the denial of legal recognition to trade unions admitting members who are not workers; the arbitrary operation of a trade union establishment reporting system; and judicial practices punishing peaceful strikes as criminal “obstruction of duties.” This suggests the issue is not something that cannot be put to bed simply through ratification of the core conventions.

After the “societal dialogue” on the core conventions’ ratification by the Economic, Social and Labor Council (ESLC) failed to proceed as hoped, the South Korean government announced last month that it would be submitting ratification motions for three of the conventions (not including No. 105) to the National Assembly at the time of legislation during the latest regular session. The objective was to have the regular session pass the ratification. But on July 4, the Ministry of Employment and Labor (MOEL) announced, “While the EU positively assessed the position announced by the South Korean government, it requested the convening of a panel of experts after concluding that [the ratification’s] passage in the National Assembly is politically uncertain.”

The convening of an expert panel represents the final stage in procedures by one FTA party to resolve a dispute with another. The South Korean government is now obligated to convene the panel of experts within two months through discussions with the EU. The panel is to include one expert each chosen by the South Korean government and the EU, along with an additional chairperson candidate from a third country selected by those two experts. The panel is to investigate and publish a report within 90 days of its formation, after which a trade and sustainable development commission – the equivalent of a government consultative group between the two sides – is to review implementation of the panel’s recommendations and advice.

Experts warned that at the current stage, the EU may pursue different forms of sanctions for violations of the agreement.

“Since South Korea was the first country to establish an FTA with the EU after the EU linked human rights policies to external trade, South Korea ended up becoming the first ‘example,’” said Lee Sung-wook, a law professor at Ewha Womans University.

“While they can’t punish [South Korea] based on the FTA alone, we can anticipate sanctions as South Korean companies operating in the EU are heavily affected,” Lee warned. The MOEL named three types of sanctions that South Korea could face from the EU, including the deferment of South Korean investment by EU businesses and intensified customs procedures for South Korean exports.

“What we’ve discovered here is that the government and employers have been wrong in implying that since the EU has been demanding efforts to ratify core conventions, the dispute procedures can be resolved simply through those efforts,” said Ryu Mi-gyeong, director of the Korean Confederation of Trade Unions (KCTU) international bureau and a committee member representing labor on a domestic advisory board of sustainable development established according to the South Korea-EU FTA.