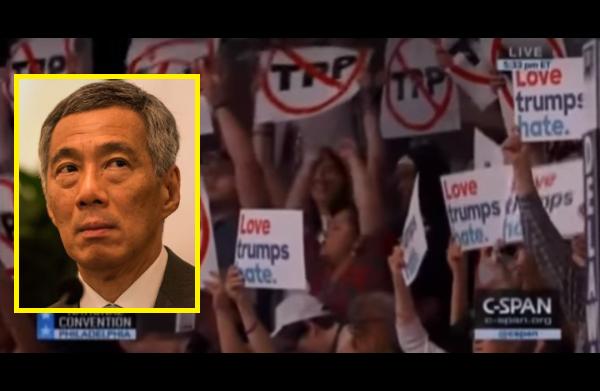 S’pore watching how TPP develops, will continue talks with other partners: PM Lee

HANOI — Despite the uncertainty hanging over the Trans-Pacific Partnership (TPP) after the United States’ formal withdrawal, Singapore will continue its preparations to ratify the trade pact, the Ministry of Trade and Industry (MTI) said on Friday (March 24).

But whether it will ratify the agreement — and when it does so — will hinge on the discussions with the remaining partners, who will meet again in May at the sidelines of the Asia-Pacific Economic Cooperation (Apec) Ministers Responsible for Trade Meeting which will be held in Hanoi.

Responding to media queries, an MTI spokesperson said Singapore met the other TPP partners recently in Chile “where we reaffirmed our commitment to a rules-based international trading system, as represented by the high-quality regional agreement that we achieved together in the TPP”.

The spokesperson added that at the meeting, the Republic said that it hopes to “harvest the benefits of the agreement in a timely way, and look forward to working with the others to make this happen, including continuing with preparation for domestic ratification”.

The MTI spokesperson’s comments came after Prime Minister Lee Hsien Loong spoke about the pact during an interview with the Singapore media at the end of a four-day official visit to Vietnam.

“The TPP, we are all watching how things will develop. Singapore is proceeding with the ratification, I think Vietnam has deferred their ratification but they are watching to see how the other partners play, going forward, and what the Americans definitely will do,” said Mr Lee.

After US President Donald Trump signed an executive order in January to withdraw the world’s largest economy from the mega trade deal, the MTI had said TPP could not come into effect in its current state, and that it would be turning its attention to other regional trade initiatives.

Last month, Trade and Industry (Trade) Minister Lim Hng Kiang also touched on the subject in Parliament, saying one option is for the remaining 11 members to negotiate bilateral deals, or the “TPP11” could continue with the ratification process and hope that the US administration would change its mind and rejoin the deal.

A third possibility was to follow through with a TPP11 without the US, he had said.

One of the other regional trade initiatives that Singapore will turn its attention to will be the Regional Comprehensive Economic Partnership (RCEP), which involves the 10 members of the Association of South-east Asian Nations and their six regional trading partners — China, Japan, South Korea, Australia, New Zealand and India.

Mr Lee said he encouraged Vietnam to take a “forward-leaning” approach when it comes to RCEP because while the TPP is important, it is “not the only way of promoting trade liberalisation”. “The RCEP is another important path and we hope we will have a substantive RCEP,” he added.

When asked if the South China Sea issue was the focus of discussions with Vietnamese leaders, Mr Lee said that it came up during the discussions “but it was not the main focus, neither was it the main purpose of the visit”.

At a joint press conference held by Mr Lee and Vietnamese Prime Minister Nguyen Xuan Phuc on Thursday, Mr Lee said they agreed to continue to work together on the full and effective implementation of the Declaration on Conduct of Parties on the South China Sea and the expeditious conclusion of the Code of Conduct in the South China Sea.