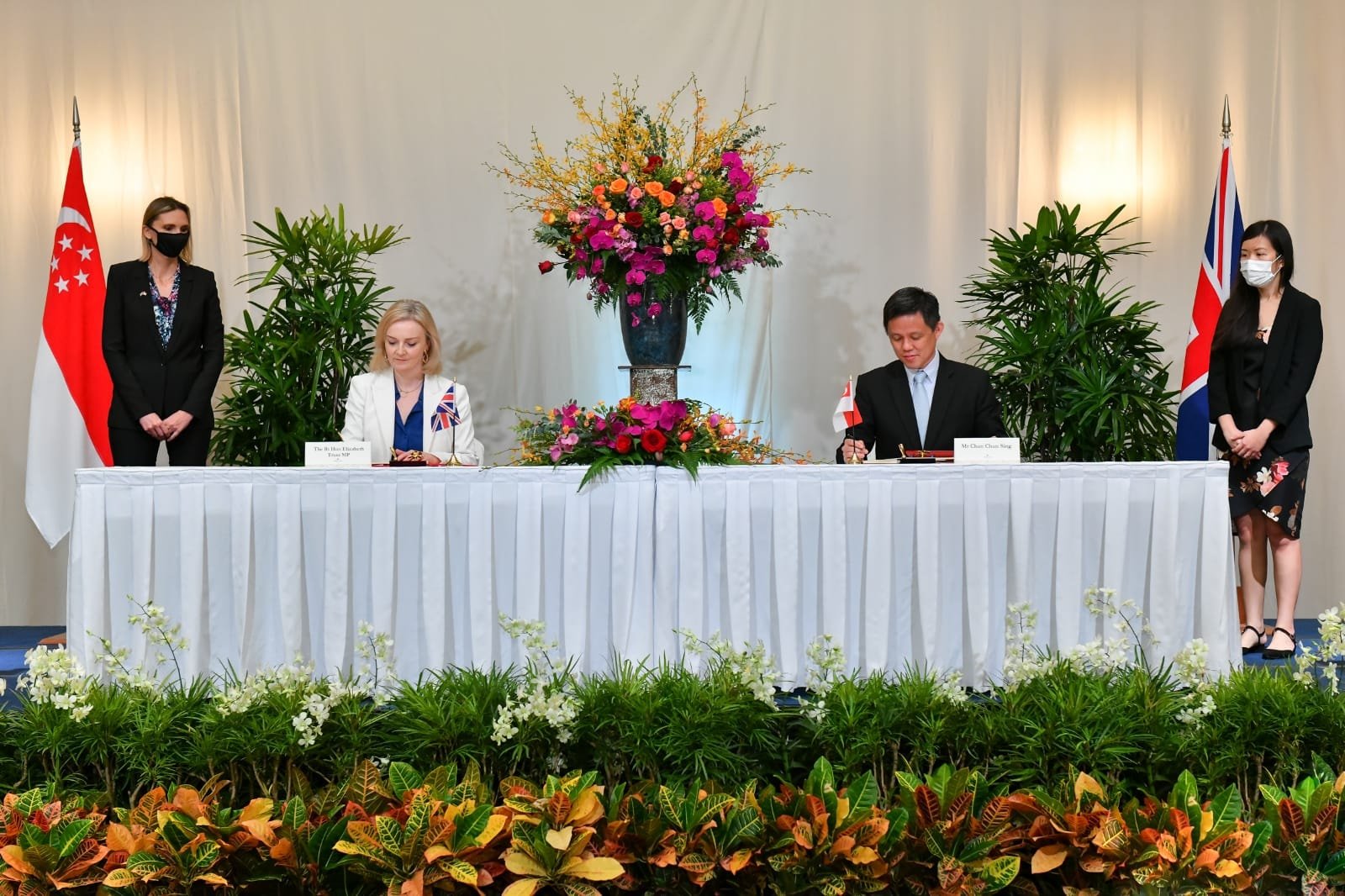 Singapore signed a free trade agreement (FTA) with the United Kingdom on Thursday (Dec 10) to ensure that companies from both countries continue to enjoy the same benefits that they are receiving under the Republic’s FTA with the European Union.

The agreement will cover more than £17 billion (S$30.4 billion) of current bilateral trade in goods and services.

The two countries also agreed to assess the modules of a UK-Singapore digital economy agreement (DEA), with a view to launching negotiations on the DEA in 2021. They also committed to start talks on and conclude an investment protection agreement within two and four years respectively of the FTA’s entry into force.

The FTA was signed in Singapore by Minister for Trade and Industry Chan Chun Sing and UK Secretary of State for International Trade Elizabeth Truss.

Speaking at the event, Chan noted that the UK is Singapore’s third and second-largest trading partner for goods and services respectively, as well as its top investment destination in Europe. In turn, Singapore is the UK’s largest trade and investment partner in South-east Asia.

As the first FTA between the UK and an Asean member state, it represents the UK’s deepening engagement of the region, and provides British businesses a platform to access opportunities in the region through Singapore, said Chan.

"In these volatile times, the UKSFTA provides Singapore and UK businesses the certainty they need to find and access new growth opportunities," he added.

The deal’s immediate and tangible benefits include tariff elimination for 84 per cent of all tariff lines for Singapore exports to the UK upon the UKSFTA’s entry into force, with virtually all remaining tariffs eliminated by Nov 2024 — the same timeline under Singapore’s FTA with the EU (EUSFTA), said Chan.

It will also enhance market access for Asian food products made in Singapore, such as har gow (prawn dumplings) and sambal ikan bilis (spicy crispy anchovies), he added.

"We hope this will allow our UK friends to try more of our distinctive Asian food products," said Chan.

Truss, in an interview with The Straits Times, said the FTA will come into force on Jan 1 next year, which is when the UK leaves the transition period for its exit (Brexit) from the EU.

The Ministry of Trade and Industry (MTI) in a statement issued after the signing of the FTA said the benefits of the UK-Singapore FTA include tariff elimination for goods trade, and increased access to respective services and government procurement markets.

The FTA will provide Singapore and UK companies with certainty and clarity in trading arrangements between both countries by reducing non-tariff barriers in at least four major sectors - electronics, motor vehicles and vehicle parts, pharmaceutical products and medical devices, and renewable energy generation.

The trade deal will also support the regional operations and supply chains of companies in the UK and Singapore.

In line with the current arrangement under the FTA with the EU, companies in UK and Singapore can continue to use materials and parts sourced from the EU-27 and Asean in their exports to each other’s markets — dubbed as Asean cumulation.

Similar to the EUSFTA, the UK-Singapore FTA requires Asean countries to provide undertakings of cooperation and compliance in order to allow for Asean cumulation.

Once the relevant cumulation arrangements are put in place, Singapore exports using Asean materials and parts can qualify for preferential tariff treatment when entering the UK.

"This will strengthen Singapore and the UK’s roles as business hubs in our respective regions," MTI said.

As the first FTA between the UK and an Asean member, the UK-Singapore FTA will also serve as a pathfinder for the UK’s engagement of the Asean region, said MTI.

The proposed UK-Singapore DEA will also serve as such for modern rules on digital trade and financial services between Europe and South-east Asia.

"It (DEA) will facilitate more seamless digital trade and business between the UK and Singapore by promoting cross-border digital connectivity and interoperability of digital standards and systems," MTI said.

The UK has indicated its interest in joining the Comprehensive and Progressive Agreement for Trans-Pacific Partnership (CPTPP), which Singapore supports and welcomes.

In addition to the FTA, the UK and Singapore have also committed to commence negotiations and endeavour to conclude a high standard investment protection agreement within two and four years respectively of the UK-Singapore FTA’s entry into force.

"This will ensure that bilateral investments are covered by robust and up-to-date treaty safeguards, as well as provide businesses and investors with the certainty of investment protection," MTI said in its statement.