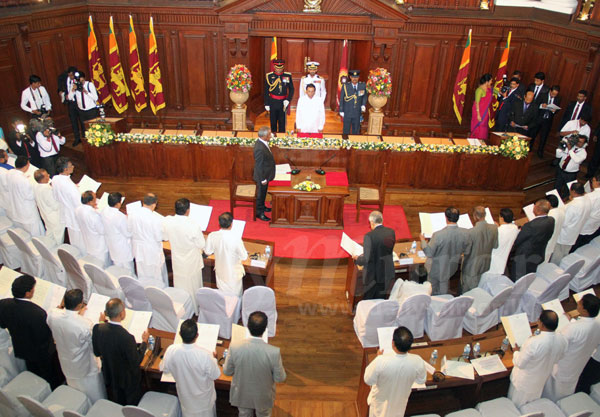 The first draft of the Sri Lanka-Singapore Free Trade Agreement has been forwarded to the Cabinet of Ministers for approval ahead of the visit of Singaporean Prime Minister Lee Hsieng Loong to Sri Lanka later this month, a leading civil servant said.

“The first draft has been forwarded by the Ministry of Development Strategies and International Trade to the Cabinet to gain approval before the Singaporean Prime Minister’s visit on the 23rd,” Industry and Commerce Ministry Secretary Ranjith Asoka said.

The government has long been planning to have the FTA ready by the time Lee visited Sri Lanka.

Development Strategies and International Trade Minister Malik Samarawickrama in November 2017 said that final negotiations were taking place during that month and that the agreement would be ready by January.

However, Asoka said that FTA negotiations are still ongoing for the next draft, while another official present said that negotiations could take years.

Negotiations for the FTA kicked off in July 2016 during Prime Minister Ranil Wickremesinghe’s visit to Singapore.

Unlike trade negotiations with behemoths such as India and China, politically-backed protests have not taken place against the Sri Lanka-Singapore FTA negotiations. The trade pact with Singapore was exploring the possibility of moving beyond the physical location of a company, to letting companies of one country to operate as a local company in the other country through a digital presence, according to the ICT Agency, which would open up opportunities in the digital sphere.

Although both the Department of Commerce of Sri Lanka and the International Enterprise Singapore have been tight lipped about the negotiations, Mirror Business reliably learns that the countries are facing difficulties in finding common ground on the negative lists, with Sri Lanka wanting to protect several industries, while Singapore, which became one of the world’s richest countries through free trade, wanting more openness.

Sri Lanka is one of the most protected economies in the world, according to the World Bank.

The current government, in the 2018 budget, removed para-tariffs on thousands of products and has attempted to liberalize some industries, but some of the more prominent protectionist industries have yet to be fully challenged.

These industries have historically ended up being protected under FTAs as well.