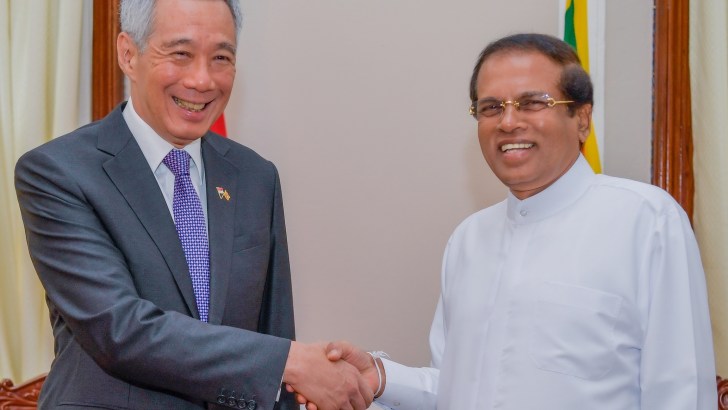 Sri Lanka-Singapore FTA comes with govt’s ‘Look East’ policy : What does it mean ?

Last week saw back-to-back visits to Sri Lanka by two South East Asian leaders, Singapore’s Prime Minister Lee Hsieng Loong and Indonesia’s President Joko Widodo. Both visits were described in terms of strengthening bilateral relations, promoting trade and investment and a desire to develop ties with ASEAN. In fact the identical language was used in the two joint statements on the website of the Ministry of Foreign Affairs regarding these visits, each saying that the respective head of state “…encouraged Sri Lanka to enhance its engagements with ASEAN and the ASEAN Regional Forum.”

During Lee’s visit Sri Lanka signed a Free Trade Agreement with Singapore, said to be the first ever inked with a South East Asian country. It was showcased as “being part of a broader ‘Look East’ strategy of the government.”This description was used in statements from the Ministry of Development Strategies and International Trade and in subject minister Malik Samarawickrema’s public remarks. What could ‘Looking East’ mean for Sri Lanka ?

‘Looking East’ is terminology generally associated with India in its economic relations with South East Asia, and had its origins in the early 1990s. More recently it includes also the more strategic objectives associated with countering Chinese influence in the region, according to analysts.The US supports India’s ‘Look East’ policy, particularly in the context of developments in the South China Sea which has become a flashpoint.

“… Since 2014, India has been working not only to Look East but to Act East as well. And it appears the government has taken substantial positive steps towards building close relationships with India’s ‘East’ partners,” says a comment on the London School of Economics blog site from two months ago. According to Vaishnavy Mulay : “When looked at, with regard to China, the Act East policy appears to be a whole different ball game. The Act East policy goals then appears to be two-pronged : boost India’s standing as a regional power by initiating increased cooperation in the region, and act as a counterweight to the increasing strategic influence of China.”

The fact that India means business when it comes to ‘Acting East,’ was on full display last Friday (26) in New Delhi where all ten ASEAN leaders were present as chief guests at India’s Republic Day parade. This was preceded by a summit with the ASEAN leaders to celebrate 25 years of India-ASEAN relations.

Notwithstanding the tensions, India’s relations with its giant neighbour and rival cannot be seen as hostile, given the significant trade relationship between the two, and India’s collaboration with China in projects like the Asian Infrastructure Investment Bank (AIIB) and the BRICS group of emerging economies.

Mulay points to ASEAN states’ complex responses to tensions in the their region when she says :“The states in China’s vicinity can be said to be seeking to expand their strategic space by reaching out to other regional and global powers. In this case, smaller states in the region, such as Vietnam and the Philippines, look to India to act as a vital actor to counter increasing Chinese hegemony. Strategically this is a clever move as officially India does not follow a policy of containing China, cloaked by the Act East policy, India is able to assert its presence in the region while at the same time this goes hand in hand with India’s efforts to strengthen ties with ASEAN.”

However Sri Lanka’s relationship with China is not comparable with that of India, or that of the ASEAN states. Sri Lanka has no border disputes with China nor has it faced any type of aggression from this ‘all-weather friend,’ who supports Sri Lanka in international forums.China has now become the biggest investor in Sri Lanka’s post-war infrastructure development. China cannot very well be blamed for the problems resulting from excessive debts voluntarily incurred by Sri Lanka, or for the domestic anger over government give-aways of freehold property rights. Was it not Sri Lanka’s prerogative as a sovereign state, and the duty of Sri Lanka’s political leadership, to negotiate more skilfully in the national interest ?

There would seem to be no clear explanation for Sri Lanka ‘Looking’ or ‘Acting’ East – if the term is taken to mean pursuing ties with ASEAN in order to ‘counter Chinese influence.’ If Sri Lanka seeks to engage more closely with ASEAN it would be for the intrinsic benefits of strengthening those relationships, and not as part of any counterbalancing strategy.

"Sri Lanka signed a FTA with Singapore, said to be the first ever inked with a South East Asian country"

So what does the government mean by ‘Looking East ?’ Is it simply a buzz-word thrown in for good measure, in the process of marketing the Singapore FTA to the public ? Does it point to some confusion at a policy level ? Or is it terminology advised by external forces guiding policy ?

It is perhaps relevant to note that US Defence Secretary Jim Mattis in Washington on 19th Jan. revealed the Trump administration’s new national defense strategy,marking a shift in emphasis from ‘terrorism’ to ‘great power rivalry.’ Mattis flagged China and Russia as the main threats, reportedly noting that China is using ‘predatory economics’ to intimidate its neighbours, while ‘militarising features in the South China Sea.’The speech came ahead of his visit to Indonesia and Vietnam.“Mattis wants to increase maritime cooperation in the region, and Indonesia - the connection point between the Indian and Pacific oceans - is key to that” said a US defence department news report. The state visit to Sri Lanka by Indonesia’s president and the calls for Sri Lanka to enhance engagement with ASEAN countries, come against this background.

As for the Sri Lanka–Singapore FTA, by all accounts there seems to have been little public discussion on it ahead of the signing. Although the government says there have been consultations with all stakeholders, a large collective of trade unions and professional associations has publicly opposed it, alleging ‘corrupt processes’ and ‘conflicts of interest.’ By the government’s own admission, Singapore is not a significant export market for Sri Lankan goods, and Singapore’s investment in Sri Lanka amounted to only $658 million from 2015 to 2017. The government seems set to introduce a raft of new laws and amendments to existing laws in the near future, to enable the FTA to be implemented. It would appear that once these changes (that the government has committed itself to) are in place, the newly liberalized policies will become applicable to all comers.

All of these factors including developments in the external strategic environment set out above, leave many unanswered questions regarding the nature and purpose of the much-hyped Sri Lanka-Singapore FTA.