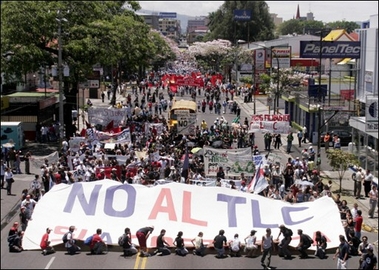 The Stop CAFTA Coalition announces the release of DR-CAFTA Year Two: Trends and Impacts, its second report on the effects of the U.S.-Dominican Republic-Central American Free Trade Agreement (DR-CAFTA) trade agreement on the majority of people in the region. Working with allies in Central America and the Dominican Republic, the report finds that “patterns of growing inequality and ongoing poverty within the signing countries have taken an upward tick, in spite of predictions to the contrary prior to the agreement’s passage.” The Coalition worked to prevent the passage of the agreement in the U.S. Congress, though ultimately CAFTA passed by 2 votes in the House of Representatives. Since implementation the Coalition has monitored the impact of DR-CAFTA in the countries in which it has been implemented. The Coalition will continue to monitor and report on the effects of the agreement.

On October 7, 2007 the citizens of Costa Rica will participate in an historic referendum to determine whether or not the country joins the DR-CAFTA. To support the democratic effort in Costa Rica the Coalition is sending a delegation of representatives from U.S. based organizations to Costa Rica to present findings on the effects of DR-CAFTA in other countries and to monitor the actual referendum process. The delegation will meet with organizations and individuals from various sectors involved in the referendum process and will have a presence as observers during the referendum to help ensure that the vote is fair and free of fraud.

Members of the US-based Stop CAFTA Coalition stand in solidarity with the people of Costa Rica who choose a more just and equitable future, rather than one dominated by neo-liberal policies that lead to increased poverty.

A successful vote against DR-CAFTA on October 7 would mark a turning point in the struggle to offer an alternative trade agenda to that being pushed by the US government, which places profit above self-determination and the needs of people. The documented effects of the “free” trade policies have led to a reassessment by the U.S. Congress about the nature of trade agreements. If Costa Ricans say “No” to the DR-CAFTA it will strengthen and support other efforts in the region to roll back the agreement, as well as efforts in the U.S. to replace failed policies with a trade policy that respects workers’ rights, cultural traditions, food sovereignty and the environment.

To download the Monitoring report (in Spanish and English), please go to http://lasolidarity.org/CAFTA_report. For more information on the referendum in Costa Rica go to http://www.bilaterals.org/rubrique.php3?id_rubrique=13