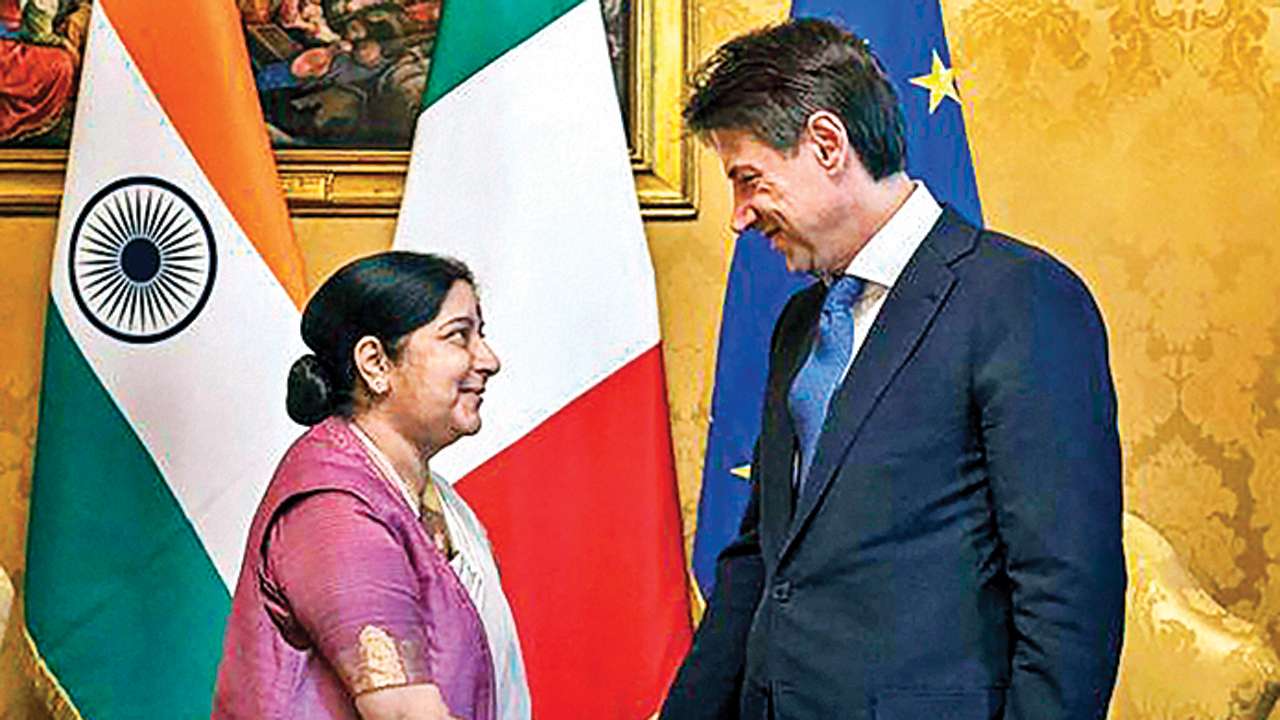 As part of her seven-day tour of four European nations, External Affairs Minister Sushma Swaraj held bilateral talks with Italian leadership on Monday. She called on Italian Prime Minister Giuseppe Conte, who assumed charge early this month, and their discussions focused on forging bilateral cooperation across sectors and steps to revitalise the bilateral relationship.

Swaraj, on the first leg of her tour, met with her Italian counterpart Enzo Moavero Milanesi. "They exchanged views on regional and global issues of mutual interest," External Affairs Ministry spokesman Raveesh Kumar said. The two leaders shared concerns relating to counter-terrorism and cybersecurity and agreed to continue cooperation in this area, the statement said.

"To augment collaboration in areas of mutual benefit, the ministers agreed to hold the next meeting of the Joint Commission for Economic Cooperation (JCEC) in India later this year," the statement said.

They also welcomed Italy’s participation as a partner country at the Tech Summit in India in November 2018, which would boost cooperation in technology and innovation.

The visit from June 17-23 to European nations will provide an opportunity to hold in-depth discussions with the political leadership on a wide range of global, regional, and bilateral issues and advance India’s growing strategic engagement with the European Union, the Ministry of External Affairs has said.

The India-Italy ties took a hit after two Italian marines were arrested for allegedly killing two Indian fishermen off the coast of Kerala in 2012. The row also impacted EU’s relationship with India.

Over the next few days, she will be visiting France, Luxembourg, and Belgium to discuss issues related to India-EU free trade agreement. The EU and Indian leaders had been looking to resume stalled negotiations over some time, but uncertainties over Brexit and inflexibility on both sides prevented the resumption of formal talks. Talks were stalled as EU was not recognising India as a "data secure" country. The EU also had reservations about high Indian tariffs on European cars and alcohol.

Her Luxembourg visit will be the first ever by an Indian External Affairs minister. She will meet the Grand Duke of Luxembourg, Henri Albert Gabriel Félix Marie Guillaume, and Prime Minister Xavier Bettel there. She will be in Belgium from June 20-23. In Brussels, she will meet Deputy Prime Minister and Minister of Foreign Affairs of Didier Reynders. She will meet President of the European Commission Jean-Claude Juncker and President of the European Parliament Antonio Tajani, as well.

Over the next few days, External Affairs Minister Sushma Swaraj will be visiting France, Luxembourg, and Belgium to discuss issues related to India-EU free trade agreement.