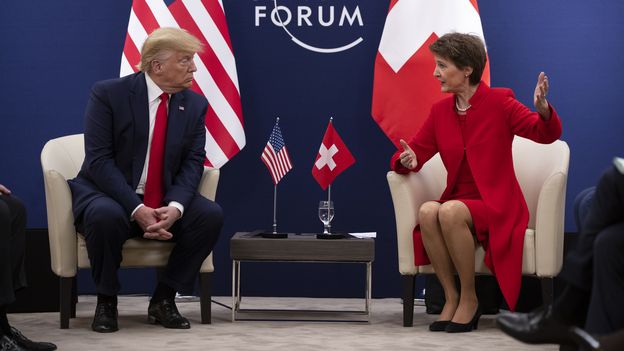 “Trump had questions for me. He asked me about trade,” said Parmelin in an interview with the Sonntagszeitung newspaper. “I also informed him about Swiss investments in the United States. I got the impression he understood. Our pharmaceutical giants Roche and Novartis, for example, are investing billions in research in the US and are also creating jobs in production.”

Parmelin was part of a government delegation that accompanied Swiss president Simonetta Sommaruga to talks with Trump on the margins of the World Economic Forum in Davos this week.

Fearing possible sanctions, the Swiss business community has been pushing for a free trade deal with the US, but there is resistance especially from the agricultural sector.

“I believe that this process is not at all a waste of time,” Parmelin told the Sonntagszeitungszeitung when asked about the utility of the exploratory talks. But he warned against “excessive optimism”, saying Switzerland “must define the content together with the United States and know where the mutual borders are”.

Parmelin, a former farmer and member of the conservative-right Swiss People’s Party, also said he would not sacrifice the farmers. “On agriculture, we told the Americans from the outset that if the goal is to abolish all tariffs, as in the failed negotiations of 2006, that is not compatible with Switzerland’s goals. I will not conclude an agreement against the farmers.”

He also raised the possibility of quotas for US products, saying this had been discussed amongst Swiss and US trade representatives but “there is still a lot to be done”.

Swiss ministers also had contacts at Davos with representatives of the European Union, which is pushing for a “framework” deal with Switzerland to replace a multitude of bilateral agreements.

Asked whether talks with the US or with the EU were more difficult, Parmelin told the Sonntagszeitung Switzerland had “very good contacts with the US government and we have a mutual interest in examining whether it is possible to conclude a free trade agreement between two countries with open and liberal economies. That would be a plus for both. In talks with the EU, the issue is adoption of law which ultimately affects our legal system. This type of discussion is much more delicate”.