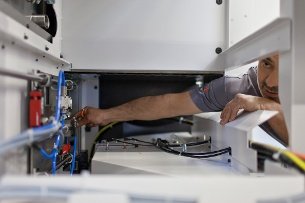 Precision machinery manufacturers could be hit hard by a US-EU trade deal. (Keystone)

A free trade agreement between Brussels and Washington could shave billions off the Swiss economy, if Switzerland is left sitting on the sidelines. That’s the conclusion of a government-sponsored study.

If the negotiations between the United States and the European Union are successful, one of the world’s largest and most complex free trade agreements will be created.

And the Transatlantic Trade and Investment partnership Agreement (TTIP) could trigger substantial losses or rewards for the Swiss economy depending on its final content and whether third countries, such as Switzerland, are granted access to its benefits.

The worst case scenario of a far reaching and discriminatory deal between Switzerland’s two largest trade partners, that locks out other countries, could wipe half a percent off the Swiss economy, a study from Bern university’s World Trade Institute (WTI) has found. In today’s money, that would shave more than CHF3 billion ($3.4 billion) from the country’s annual economic output.

Swiss trade with US and EU

The European Union is Switzerland’s largest market for goods and services exports with the US in second place.

In 2012 the EU absorbed 56% of Swiss exports while three quarters of all imports into Switzerland came from the European trading bloc.

From the perspective of the EU, Switzerland is the third largest market for its exports (after the US and China), taking 7.9% of its goods and services.

After China, Russia and the US, Switzerland is in fourth place for volume of imports absorbed by the EU. In 2012 Switzerland provided 5.8% of the goods imported by EU countries.

The US absorbed more than 6% of all Swiss goods and exports last year (totaling nearly CHF25 billion).

Nearly 19% of all Swiss foreign direct investment (FDI) goes to the US (CHF201 billion in 2013), making the US the favourite destination for Swiss corporate investors.

The US alone absorbs nearly twice as much Swiss FDI than Germany, Austria, France and Italy combined.

Switzerland is the 14th most important trade partner for the US. Exports from the US to Switzerland increased 7.5% last year to CHF11.2 billion.

“The TTIP could be a ‘Treaty of Rome’ moment,” WTI managing director Thomas Cottier told swissinfo.ch, referring to the 1957 agreement that spawned the European Economic Community by establishing a single set of trading rules across all participating European countries.

“If Switzerland does not get on board then we could see Swiss firms being forced to leave Switzerland and relocate to EU countries.”

The significance of such a deal, although still years off from completion even if it can be agreed, has not passed unnoticed by the Swiss authorities.

Economics Minister Johann Schneider-Ammann voiced his concern of Switzerland missing out on the TTIP in the Neue Zürcher Zeitung newspaper in February, days after he met with US trade representatives at the World Economic Forum in Davos.

“After all the US is Switzerland’s second most important trading partner behind the EU. It is therefore of paramount importance to us to be on a level playing field,” he said at the time.

By level playing field, Schneider-Ammann meant that Swiss firms should enjoy much of the same tariff and red-tape reduction as those in the TTIP signatory partners, despite Switzerland not being part of the EU.

The deal promises to go much deeper than reducing import duties on goods. It will also harmonise intellectual property rights laws and rules covering state procurement. Some 7% of all government contracts handed out by EU member states go to Swiss firms, according to WTI research.

In addition, the TTIP plans to erase non-tariff barriers that can obstruct trade. These can include anything from health and safety laws on food production to drug trials, the amount of carbon emissions that can be produced to make consumer goods to how long an electric cable on a kettle should be to avoid fire hazards in the kitchen.

Such rules have been harmonised across EU member states, but Swiss firms currently have to expend time and money adapting versions of their products for both the EU and US markets to meet different regulations.

The savings that can be made if Swiss companies gain access to the TTIP terms are enormous, but so are the losses if they are frozen out of the deal, handing EU competitors an enormous advantage.

“At the very least, Switzerland has to signal to the US and EU that it is interested in taking part in whatever deal finally emerges,” WTI’s Cottier told swissinfo.ch.

Ambassador Didier Chambovey, head of the world trade division at the State Secretariat for Economic Affairs (Seco), is striving to achieve more than that.

Speaking at a presentation in Bern on July 10, Chambovey said there were three options on the table for Switzerland: try to reopen free trade negotiations with the US that fell apart in 2006, try to gain access to the TTIP as a third party country or do nothing.

The chances of the US agreeing to negotiate a separate deal with Switzerland - even if it is done this time in conjunction with the other European Free Trade Association (EFTA) countries of Norway, Iceland and Liechtenstein - are negligible, according to Cottier.

“US trade negotiators already have their hands full with TTIP,” he said. “Switzerland missed the boat in 2006 when its free trade negotiations with the US broke down on disagreements over opening up agricultural markets.”

Doing nothing appears hardly a feasible option either, particularly when the WTI’s forecasts are put together with Seco’s own studies on the impact for Swiss exporters on the isolated ‘rules of origin’ subject.

Seco researched how Swiss-made exports might fare if Switzerland was not part of a TTIP that would favour products and services originating from the US and EU. The study found that suppliers of automobile parts and precision engineering instruments would be most heavily hit, but other sectors such as pharmaceuticals and chemicals would also adversely affected.

Chambovey himself is rather more optimistic about achieving access to the TTIP once it has been finalised. He has twice met with US trade delegates to ram home the message that “there are other countries in Europe [outside of the EU] with economies that are not negligible.”

While it is too early to tell if TTIP will end up as an ‘open platform’ on which other countries can hitch a trade-boosting piggyback, Chambovey hoped that Switzerland could be offered access to the final agreement.

The dossier would then be handed over to politicians to decide whether that would be in the best interests of Switzerland - farmers and all.

Switzerland is one of 50 countries currently involved in international negotiations in Geneva aimed at liberalising the trade in services.

But the last of these goals has run into opposition among socialist and green groups in Switzerland that fear vital public services, such as schools and hospitals, may be overrun by the private sector.

The Stop TISA Committee has demanded that the government conduct research into how TISA could affect such services that affect half a million jobs in Switzerland.

In December, around 1,000 protestors demonstrated against the negotiations in Geneva.