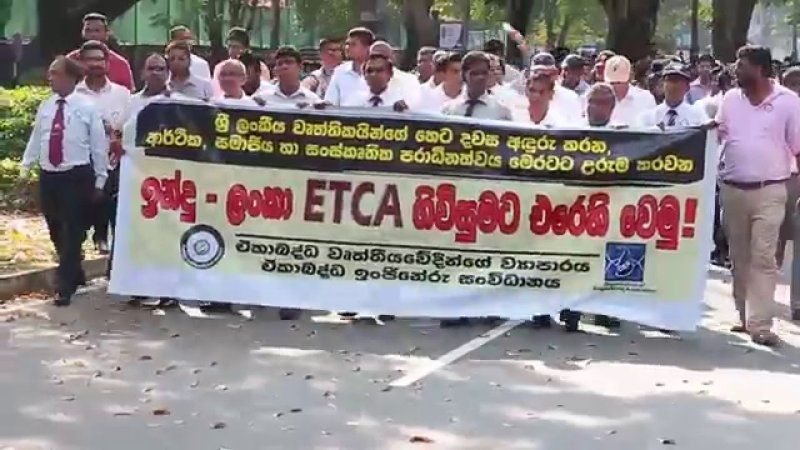 Taking a closer look at ETCA

(The writer is the secretary of the Association of Information Technology Professionals and a coauthor of the book ‘ETCA – Neyekda? Akramanikayekda?’)

When Sri Lanka and India decided to start working on a comprehensive economic agreement between the two countries, Chandrika Kumaratunga was the President and Ranil Wickremesinghe was the then Prime Minister of Sri Lanka. In April 2003, the Joint Study Group was established to commence work on the agreement which was named CEPA (Comprehensive Economic Partnership Agreement) at that time.

It progressed irrespective of the change of Government in 2005. Everything was organized to sign the framework agreement for CEPA during the 15th SAARC Summit in Colombo in 2008. Despite the preparations, the then President Mahinda Rajapakse lent an ear to local entrepreneurs, some of the political parties in the coalition Government and nationalistic movements and decided not to sign the agreement. After that, progress of the comprehensive economic partnership agreement with India decelerated. However, a few Sri Lankan economists who worked according to the agenda of India strove to bring back the agreement to the surface.

Once the current Government was elected, progress towards a comprehensive economic agreement with India was again accelerated. Objections from the civil society, particularly from the professionals amplified. The name of the agreement was thus changed from CEPA to ETCA (Economic and Technical Cooperation Agreement). The entire negotiation process of the agreement has been conducted without transparency and stake holder participation which are considered as key features for successfully negotiating a free trade agreement. At one instance it was even declared that even if there was opposition, the Government was going to sign the ETCA.

Five rounds of discussions between Sri Lanka and India have been concluded by now. According to the lead negotiator of the Sri Lankan team, most of the contents in the agreement have been concluded and the negotiation process will be concluded soon. This will enable the ETCA to be signed by the end of this year or early next year. It isn’t only information technology and ship building sectors that are considered for service in the agreement. Opportunities to serve this venture are opened to Indian companies and Indian professionals. Other opportunities for them will be opened in fields like transportation, highways, railways, education, health, power and energy, construction, banking and finance as well.

Meantime there is an attempt to implement some parts of the ETCA via different specific agreements. The Memorandum of Understanding signed between the two countries during the Prime Minister’s visit to India in April this year is a good example.

A few so called ‘economists’ who are working to make ETCA a reality haven’t done a feasibility study for 15 years. What they have been doing for such a long time is trying to justify the ETCA by inconsistent and primitive arguments Political Decision and the Dictatorial Regime

K .J. Weerasinghe who replaces Dr. Saman Kelegama, after the latter’s sudden demise, as the Lead Negotiator for Sri Lanka has elaborated an important point during an interview with Daily Mirror published on 10th of August. He has mentioned that “It is a decision by both the Governments at high political level that ETCA should be negotiated and completed”. Though the fact that ETCA is a political decision taken at high political level isn’t a secret to many Sri Lankans, it is the first time that a Government official has made it clear to the media in public and it is important due to various reasons.

In 2008, President Mahinda Rajapakse made a political decision to refrain from signing the agreement after lending an ear to the people of this country. In 2015, once Maithripala Sirisena was elected as President, the new Government made a political decision to restart the process in keeping with the agreement. It was done in an accelerated manner, disregarding objections by local entrepreneurs, professionals and other bodies.

It is clearly against the mandate for good governance. At least former President Mahinda Rajapakse listened to the people and had the courage to take the decision not to sign the agreement. However with regard to this regime, it seems nobody has the power to take decisions on behalf of the people and ultimately the voice of the people is not hard. Therefore at the end of the day, people seem to experience more dictatorship under this Government, though the dictator is invisible. A regime becomes dictatorial only by its practice. It is under these circumstances that K. J. Weerasinghe’s claim that “ETCA is a decision by both the Governments at high political level” becomes more important. We must be thankful to Weerasinghe for highlighting this.

It is customary to do a feasibility study before you arrive at any important decision. There is no difference in that when it comes to trade agreements. The Asian Development Bank’s publication, ‘How to Design, Negotiate and Implement a Free Trade Agreement in Asia’ suggests “At the pre-negotiation consultation stage, national feasibility studies, domestic sensitivity analysis, scoping studies or public hearings to assess the desirability and viability of the proposed FTA and identify sectoral difficulties.” A country should recognise the industries which are benefited and threatened by these free trade agreements in the pre-negotiation stage. Not only did Sri Lanka not carry out any of these analyses, but its authorities also didn’t even have a pre-negotiation stage.

A few so called ‘economists’ who are working to make ETCA a reality haven’t done a feasibility study for 15 years. What they have been doing for such a long time is trying to justify the ETCA by inconsistent and primitive arguments. We have answered all of those arguments and thoroughly explained why ETCA is detrimental to the Sri Lankan economy and society through the book “ETCA – Neyekda? Akramanikayekda?” (ETCA-A relative or an Invader?).

There have been many inconsistent statements made by those who are in favour of ETCA in this regard. One such false argument has been revealed by the above mentioned interview with K. J. Weerasinghe. Once, MP Dr. Harsha De Silva strongly said that mode 4 – movement of natural persons wouldn’t be included in the agreement. Weerasinghe explains that three subcategories out of four subcategories under mode 4 namely, corporate transferees, contractual suppliers, and business visitors have been included in ETCA. The only subcategory which hasn’t been included for the time being is ‘independent professionals’. However during her visit to Sri Lanka in Septemeber, 2016, India’s former Commerce and Industry Minister Dr. Nirmala Sitharaman explained that mode 4 will be implemented step by step. Since the subcategory which isn’t included now in the agreement is independent professionals only, that could be expected to be included at the next stage.