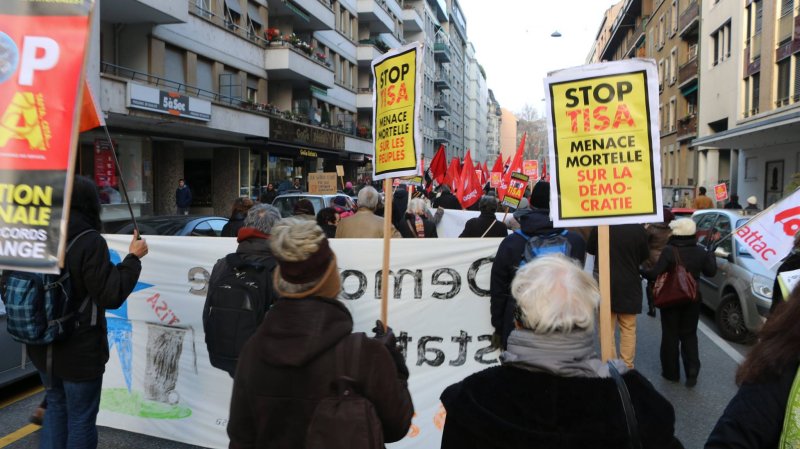 Ten things you need to know about TiSA While global attention has been focused on other trade deals, such as the failed TPP, governments and corporations have been working hard to push through the Trade in Services Agreement” (TiSA).

Negotiations have been shrouded in secrecy but leaked documents show that global services corporations and some governments are using the deal to push a deregulation and privatisation agenda.

A deal could be reached as soon as early 2017. Here’s what you need to know.

1. It’s massive, but excludes most low income countries All 28 EU member states, as well as the United States, Australia and 20 other mostly high income countries* are involved in TiSA negotiations, meaning the deal will cover around 70 per cent of global trade in services.

Emerging economies like Brazil, India, China, Russia, and over 100 developing country WTO members are not included in making the rules, but would be pressured to join later.

3. Almost all services will be affected TiSA could set rules affecting almost all service provision including education, healthcare, transport, water, telecommunications, postal services, aged care, child care, energy, retail and banking services. These are services which many of us use each day. It’s claimed that “public services” are not included in the negotiations but the TiSA definition of what constitutes a public service is very ambiguous.

4. De-regulation is the aim Instead of reducing tariffs on goods, TiSA aims to reduce government regulation on services, by freezing regulation at current levels and reducing it over time. This suits global services corporations but not peoples’ needs.

TiSA could prevent or limit future regulation needed to achieve these goals.

5. Hidden privatisation agenda The TiSA pushes for the privatisation of public services in many ways: through its ambiguous definition of what constitutes a “public” service, by allowing greater accesses to services markets for global corporations and through rules which will make reversing a decision to privatise almost impossible.

Privatisation is a politically sensitive issue in Australia where, according to the chair of the Australian Competition and Consumer Commission, it has often failed to deliver promised outcomes, led to price rises for consumers and damaged the economy. Any decision to privatise or to reverse a privatisation should be made through an open democratic process and should not be bound by rules made in secret trade negotiations.

6. Re-regulation not an option TiSA would stop governments from putting stronger regulations in place in the future, limiting their ability to respond to future crises or changed circumstances.

For example, the TiSA would have limited government regulation of the financial sector in response to the global financial crisis in 2008.

Deregulation and private tendering for Australian vocational education services resulted in fraudulent advertising, failure to provide courses to students and misuse of government funds. If TiSA had been already in force, it could have prevented the government from re-regulating the vocational education sector, because of commitments which prevent future increases in regulation

7. Race to the bottom on quality, safety, more temporary workers TISA rules for licensing, qualifications and service standards not to be "burdensome" could prevent future improvements in staffing and qualifications in industries like child care and aged care.

TiSA also has provisions to increase numbers of temporary overseas “contractual service providers” without testing if local workers are available. Studies show these workers are vulnerable to exploitation, which can undermine wages and conditions in those industries.

9. Limited regulation for future services Trade agreements like the TiSA bind governments for decades, limiting their ability to respond to future challenges like climate change, corporate tax evasion or another financial crisis. TISA could also prevent regulation of future new services - that is, services which have not even been invented yet.

10. TiSA could be signed this year Negotiators had aimed to finish TiSA negotiations in 2016, but this was abandoned after a November ministerial meeting was cancelled, in part due EU concerns over data privacy, market access and the regulation of new services. However, negotiations are in their final stages and the new aim is for conclusion in early 2017.

We need to tell our Government not to trade away regulation of essential services. Take action by sending a message to Trade Minister Steve Ciobo.