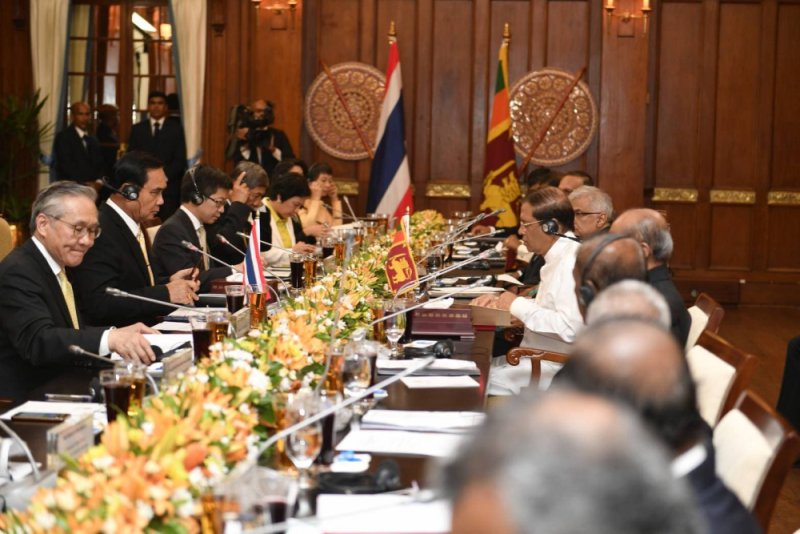 BANGKOK — Thailand sees a planned trade deal with Sri Lanka as an opportunity to tap into China’s signature Belt and Road Initiative while hedging against fallout from the escalating global trade war.

Representatives of the Sri Lankan government are in Bangkok on Thursday for two days of talks regarding the pact with their Thai counterparts. This follows Thai Prime Minister Prayuth Chan-ocha’s state visit to Colombo in July, when the two countries agreed to seek ways to triple bilateral trade to $1.5 billion by the end of 2020.

The move comes as prospects dim for a seven-nation trade deal between Bangladesh, Bhutan, India, Nepal, Sri Lanka, Myanmar and Thailand. Bangkok sees bilateral deals as a way to move forward, saying it is making good progress in setting up pacts with nations such as Turkey, Pakistan and Chile.

Auramon Supthaweethum, director general of the trade negotiation department under Thailand’s Commerce Ministry, said this week that massive Chinese infrastructure investment in Sri Lanka has made the island attractive as a short cut to other regional markets, as it has pacts with India and other South Asian nations.

The Belt and Road Initiative refers to planned transport routes through Asia into Europe and Africa. It aims to support infrastructure construction in more than 70 countries to create channels for Chinese businesses to expand in these markets, while also increasing Beijing’s political and military influence.

Some analysts are skeptical about Chinese loans to emerging economies, calling China’s aid a debt trap. In return for aid, recipient nations are expected to cede control of facilities or operating rights, as is the case for ports in Sri Lanka and Pakistan.

Massive debt burdens forced Sri Lanka to obtain financial help from China, as well as grant Beijing a 99-year lease on a new port along one of the world’s biggest shipping routes.

But despite skepticism over the Belt and Road Initiative, Thailand hopes the talks will pave the way for business opportunities across Asia and the Middle East.

Auramon said that Sri Lanka itself has robust economic growth of 5.8% and that Thai hotel chains are starting to invest in tourist attractions there.

"The FTA with Sri Lanka will pave the way for Thai companies to invest, produce and export products originating from Sri Lanka to other countries with which Sri Lanka has FTAs," said the trade negotiator.