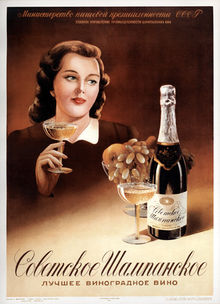 The bubble bursts for Ukraine’s ’Champagne’

By Shaun Walker in Kiev

Ukrainian winemakers will be forced to stop labelling their sparkling white wines as "Champagne" as part of a free trade agreement with the European Union due to be signed later this year. The head of the EU delegation to the country said last week that the issue is a "non-negotiable" part of the deal, which is expected to come into force in 2013.

Since Soviet times, the vineyards in the southern Crimea region of Ukraine have produced a syrupy sweet sparkling white wine, which is known as shampanskoye. It is often unpalatably sweet for Western European tastes, but is very popular in Ukraine and Russia.

From next year, however, producers will have to come up with another way to describe it. "Alternative names must be adopted," said José Manuel Pinto Teixeira, the head of the EU mission in Ukraine, last week.

There are nearly 3,000 food and drink products which must be made in a particular area for the name to be used in the EU, including Parma ham, Roquefort cheese, and – as of last week – the Cornish Pasty. But in Ukraine, there are a whole range of products, first marketed in the Soviet era, that copy Western names. Aside from shampanskoye there are also the brandies known as konyak and sweet red wines called Madeira, not to mention local cheese brands marketed as Feta. All of them would fall foul of the EU’s rules.

"I don’t know what they should call shampanskoye but I have an idea for Ukrainian Madeira," said Mr Teixeira. "The wines are produced in a place called Massandra. Why not call them Massandra wines, and who knows, maybe in a few years from now, tourists will travel to Massandra especially to drink the wines."

Mr Teixeira said that Spain is an excellent example to Ukraine that rebranding products can work. When the country joined the EU, they were forced to rename "Spanish champagne" as Cava. "Now everybody knows what Cava is," he said.

The trade deal with Ukraine, which both sides want to sign later this year, will ease trade barriers and bring the former Soviet state a step closer towards eventual EU membership. The branding issue has been one of the hardest for the Ukrainians to accept, said Mr Teixeira. Government ministers have now accepted that it is the end of the road for shampanskoye, but other Ukrainians are not convinced.

"I haven’t heard about this, but I can’t imagine anyone is going to stop calling it shampanskoye," said Marina, a cashier at a Kiev supermarket.