The Caribbean EPA Affair: Lessons for the Progressive Movement 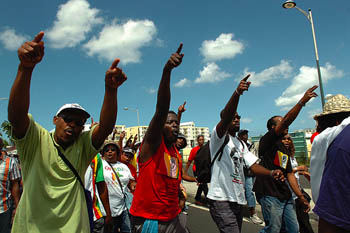 Abstract: This paper discusses lessons for the regional progressive movement of the 2007-2008 campaign of Caricom civil society to secure public review and government renegotiation of the CARIFORUM-EU EPA. To this end it highlights the role of ideology, power, governance and politics. It argues that the EPA institutionalises a relationship of asymmetrical power with the European Union based on the principles of neoliberal globalisation; and that it was secured through the manipulation of ‘divide and conquer’ and ‘carrot and stick’ strategies together with an ideologically driven framework for the negotiations that portrayed neoliberal policies as being automatically conducive to development. The protest movement succeeded in exposing the agreement to public scrutiny and debate and helped to secure insertion of a mandatory review clause in the final agreement. It failed to obtain a complete renegotiation of the EPA: the reasons include the absence of a strong regional political base and organisational capability, the amorphous character of Cariforum/Caricom governance; and the enormous external and internal pressures exerted on governments to sign what had been negotiated. Three techniques employed in the EPA process are highlighted: ‘technification’ of the negotiation process as an instrument of mystification and political exclusion; ’sweetification’ of the presumed benefits of the EPA in order to facilitate political acceptance; and ‘treatyfication’ of the outcome of the negotiations in order to bind present and future government policies. These techniques may have salience in the politics of trade agreements in other countries and regions. The paper concludes by summarising lessons in the light of the possibility of modifying the EPA in the future and of upcoming negotiations with other trading partners involving issues similar to those that were contentious in the EPA.