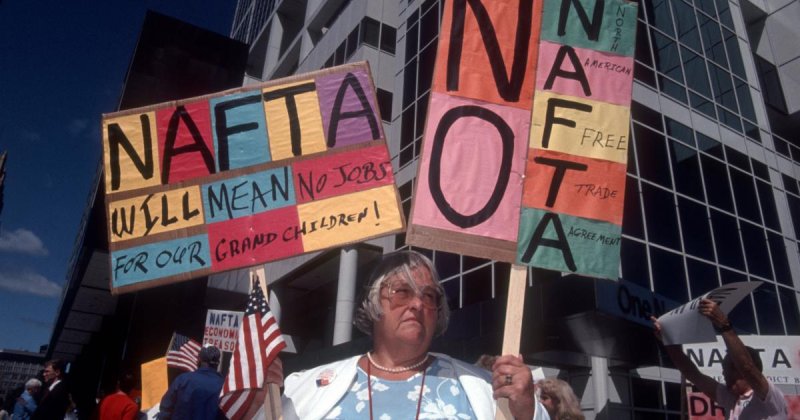 The new NAFTA: A license to discriminate on the basis of sex

Now that the final text has been released for public scrutiny, disturbing details continue to emerge. The latest shocking revelation concerns Chapter 23 of the new agreement on labour: it seems to actually condone employment discrimination.

An earlier draft of the agreement called on each country to implement “policies that protect workers against employment discrimination on the basis of sex, (including with regard to sexual harassment), pregnancy, sexual orientation, gender identity, and caregiving responsibilities,...and wage discrimination.”

But the final agreement has new wording that, at best, dilutes the goals of the chapter, and, at worst, undermines them completely. The problematic language in the labour chapter is found in Article 23.9.

First, the language in the text says that “each Party shall implement policies that it considers appropriate to protect workers against employment discrimination."

“This is a considerable downgrade from what we were promised in the original draft,” says Larry Brown, President of the National Union of Public and General Employees (NUPGE). “It is now empty, meaningless wording, granting each country licence to decide what kind of discrimination is appropriate and what is not."

Brown continued, "It’s completely ridiculous to allow such wording. It is just false to suggest that there is any kind of common standard at play here. There’s no standard at all. Each country can continue to discriminate as it sees fit, and simply claim that it is ’appropriate.’ ”

Federal U.S. employees (and possibly all others) may be exempted from any protections

Second, and perhaps even worse, is the language found in a new footnote in article 23.9 (footnote 13) that nullifies the already weak language in the text. Footnote 13 may exempt federal U.S. employees from any protections mentioned in Article 23.9. But it also appears to potentially exempt all employees, both public and private sector. The footnote states: “The United States’ existing federal agency policies regarding the hiring of federal workers are sufficient to fulfill the obligations set forth in this article. The article thus requires no additional action on the part of the United States, including any amendments to Title VII of the Civil Rights Act of 1964, in order for the United States to be in compliance with the obligations set forth in this Article."

The wording here exempts federal agency workers from the article, because it stipulates that the existing policies for those workers is the “sufficient” standard for those employees. But this wording could also mean that all other workers, namely those not in the federal service (and who may not be protected at all with anti-discrimination policies) are not protected whatsoever. The footnote tells us what is “sufficient to fulfill the obligations set forth in this article.” In so doing, it mentions existing policies for specific workers, but makes no mention of the need for any new policies, or any policies at all, for other workers in the private sector or for those of the individual states.

As reported by Global News, according to Sarah Kaplan, director of the Institute for Gender and the Economy and professor at the Rotman School of Management at the University of Toronto, “the footnote completely nullifies the article for the United States—which is bad because the U.S. doesn’t actually meet the standards laid out in the text. ‘If you look at the United States, the federal law is not sufficient to meet those standards. In fact, no federal law covers sexual orientation and gender identity at all,’ ” Kaplan explained.

A monumental failure on the part of the Government of Canada

In its consultations with stakeholders, the Government of Canada and its negotiators have characterized this new labour chapter as a “very significant step forward,” and have described the anti-discrimination language as an “incremental step forward.”

But we disagree. “This is a monumental failure on the part of the Government of Canada," remarked Brown. “Either by intention or oversight, our government negotiated an agreement that gives the U.S. and Mexican governments our blessing to continue discriminating against workers on the basis of sex, (including with regard to sexual harassment), pregnancy, sexual orientation, gender identity, and caregiving responsibilities, and wage discrimination.”