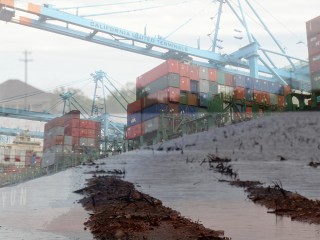 A new report from the Institute for Agriculture and Trade Policy finds that the proposed Trans-Pacific Partnership (TPP) involving the U.S. and eleven Pacific Rim countries, totaling nearly 40 percent of the global economy, would benefit high greenhouse emitting industries like energy and agriculture, while restricting national and local policies that respond to climate change.

The report, The Climate Cost of Free Trade: How the TPP and other trade deals undermine the Paris climate agreement, finds that existing trade agreements and proposed new rules in the TPP would impact countries’ climate goals committed to as part of the global Paris Climate Agreement.

“There is a real blindspot for the climate within trade agreements, and particularly the TPP,” says Ben Lilliston, IATP’s Director of Climate Strategies and the report’s author. “Trade deals are driving a form of corporate-led globalization that is highly extractive of natural resources and completely ignores the damage it does to the climate. If we don’t reform our trade agreements and reject the TPP, it will be nearly impossible to reach our climate goals agreed to in Paris.”

National commitments to reduce greenhouse gas emissions, covering sectors like energy, agriculture, and forestry, are at the heart of the Paris climate agreement. All TPP participating countries have submitted a climate plan as part of the Paris deal. Yet, the IATP report found that the TPP expands the reach of past trade deals that have struck down renewable energy programs supporting green jobs, provided agribusiness more opportunities to challenge regulations that protect farmers and consumers, and limited the ability of countries to regulate dirty energy production like coal mining, fracking, and off-shore drilling. The words, “climate change” do not appear at all in the agreement.

TPP countries like the U.S., Australia and Japan are major producers and users of oil, natural gas and coal. Other TPP countries like Malaysia, Peru and Chile are dealing with expanded mining and agriculture operations that are leading to deforestation. The TPP would grant foreign corporations special rights to challenge laws in other TPP countries that they deem their expected profits by using a secret, extrajudicial trade court.

“Sinking public support for the TPP in the U.S. is creating an important opportunity to reform trade rules,” said Lilliston. “We can’t separate a bad deal like the TPP from the secrecy in which it was negotiated. A new, fair trade agenda must be grounded in greater openness, and a more public debate about objectives, including how to respond to climate change.”

You can read the executive summary and full report at: http://www.iatp.org/climate-cost-of-free-trade