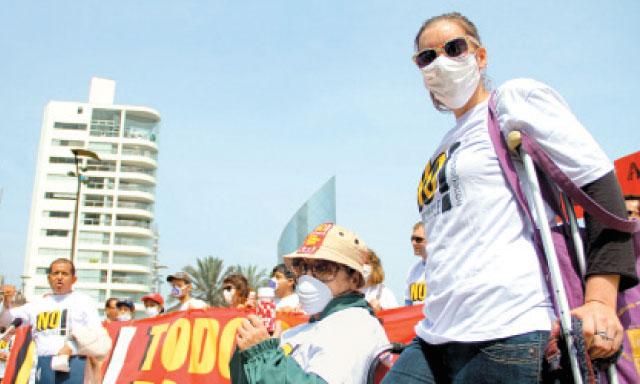 Freely translated by Anoosha Boralessa (June 2015); not revised by bilaterals.org or any other organization or person.

The Transpacific Partnership will impact sovereign control over health policies

A text that Peru and 11 other countries (including the US) are negotiating in secret, seeks to expand drug patents for more than 20 years thus generating millions of overheads for our health system and making it even more difficult to obtain biological medicines against cancer.

Our Health Ministry fought by itself against the multinational pharmaceutical company Brystol-Myers Squibb and this resulted in a declaration that it was a matter of public interest that an anti-retroviral drug cost us 25 times more than it costs in Bolivia. The struggle was a small one compared to what we could expect if Peru ratifies Transpacific Economic Association Agreement (the English acronym for which is TPP) without safeguards.

Since 2010, the US and 11 other countries have been negotiating agreements between closed doors. Peru is one of these 11 countries. Together these countries represent 40% of global trade. This transforms the TPP into the broadest and most controversial trade agreement to date.

The little that is known about the content of this agreement has been obtained from repeated leaks on Wikileaks of chapters such as the ones on Intellectual Property, Transparency and Investments. These chapters have serious implications for access to medicine.

On 25 March 2015, the Republic and Mexican daily newspaper, La Jornada, simultaneously denounced how the TPP Investment Chapter exposes countries to multimillion dollar claims before supranational arbitral tribunals when an investor considers that a State policy has affected its current or future earnings.

TRIPS, the current WTO agreement on Intellectual Property Rights, does not provide laboratories with the right to bring a WTO claim. Only States are permitted to do so.

However Article 2 of the TPP Investment Chapter would change the rules of the game by permitting “investor –state” claims. This would enable businesses that operate in any of the 12 countries to claim indirect expropriation. This is a concept that would cover regulations to safeguard public health in “exceptional circumstances”.

As a precedent, the US organization, Public Citizen, takes the example of a NAFTA claim brought by the multinational pharmaceutical company Eli Lilly against Canada for USD 100 million.

What is surprising is that according to the latest leaked version of the agreement, only Australia objects to this supranational tribunal having jurisdiction over medical treatments considered to be in the public interest.

Among the 12 future signatories of the TPP, a group of seven countries led by Australia and New Zealand, oppose the provisions of the agreement that may affect access to medicines. Peru is not in this group, even though our FTA with the US is one of the most accommodating on this issue, thanks to the US Democratic Party that intervened in the US Congress and eliminated those clauses most harmful to public health.

The new Transpacific Agreement provides some (“additional”) regulations on Intellectual Property. The US advocated for these regulations that would increase the costs of medicines to combat HIV, cancer and other illnesses.

In subsequent chapters on Intellectual Property that have been leaked since 2011, there is a consistent desire to extend patents for drugs for more than 20 years (the period currently established in TRIPS) (see computer graphics).

The ways of extending patents proposed by the text involve providing compensation when countries purportedly delay in issuing patents and health registers. Another way is to extend the scope of the patents to subsequent uses of medicine something that legislation prevailing in Andean countries prevents (D.A. 486).

The famous drug Viagra is an example of this. This drug was first patented for chest angina. However later it was discovered to have a side-effect of curing impotence and rare diseases such as muscular dystrophy.

If the TPP enters into force in the form proposed by the initial leaks, a medicine that could be patented and could extend its market monopoly for another twenty years if “a new use” can be demonstrated.

The first text leaked from this agreement would propose to also patent surgical methods something that, following criticisms made by civil society, disappeared from the text that was leaked in 2013 and 2014.

According to statements made by Medicins sans Frontiers, healthwise, the TPP is the most dangerous trade agreement that has ever existed, especially for a medium income countries such as Peru. “This global agreement has a broad reach and endangers human lives”. So declared their spokesman Judit Rius, following the most recent leak of the TPP in 2014.

The Allianza LAC - Global por el Accesso a Medicamentos calculated that it would cost Peru an additional 447 million dollars to extend the patents for medicines projected to 2030. This figure, has also been supported by Adifan, and assumes an actual cost in terms of the health of more than 1,600, 000 Peruvians.

Biological medicines are large living molecules whose effectiveness is measured by the time by which they extend the life of those suffering from specific types of cancer and auto-immune ailments such as rheumatoid arthritis or orphan diseases.

Such medicines are very costly. For example, one ampoule of Trastuzumab for breast cancer costs more than 5,000 soles. Only 2% of medicines acquired by EsSalud are biological. However, this small percentage assumes 65% of EsSalud’s budget for purchasing drugs.

While the entry of biosimilars (the “generic” and cheaper version of these drugs), is still not regulated in Peru, the TPP would delay the arrival of these cheaper treatments for at least another 8 years.

According to Public Citizen, the TPP’s chapter on Intellectual Property defends the incorporation of protecting of test data for biological products for more than seven years. This would require it to be exclusively marketed which would in turn push the price up.

The US – Peru FTA that is currently in force does not incorporate the test data of biological drugs but only “chemical entities”. Neither does our legislation.

Javier LLamoza of Accíon Internacional para Salud in Perú, decried: “The pharmaceutical industry is lobbying hard so that all countries will adopt a standard of protection of test data for 7 – 12 years”

While a debate on the TPP was not on the public agenda of Peru, Chile, Mexico, (the Latin American signatory countries), US President Barack Obama is making strenuous efforts to ensure that Congress gives him authority to “fast track” this treaty. Luckily, for the time being, there is much opposition in the US Congress to this agreement with our country.

Links accessed for the translation

For some background on the TPP: http://www.bilaterals.org/spip.php?page=print-rub&id_rubrique=129