India, Indonesia, Malaysia and Vietnam have largely escaped U.S. President Donald Trump’s glare on trade, but he may yet come looking. The U.S. runs trade deficits with all of them, in some cases quite big ones.

Trump’s exit from the 12-nation Trans-Pacific Partnership, his attacks on the trade policies of Japan, China and South Korea, and a Republican push for tax reforms that would impose a levy on U.S. imports from all countries are contributing to concerns that a protectionist era will hurt growth.

Countries that the U.S. runs trade deficits with may be particularly vulnerable to attack. Peter Navarro, the head of Trump’s National Trade Council, and Commerce Secretary-nominee Wilbur Ross last year wrote a paper where they pinpointed America’s trade gaps as a cause for what they described as its “slow growth plunge.”

“Almost every country in Asia exports somewhere between an awful lot and a lot to the United States,” said Deborah Elms, executive director of the Asian Trade Centre, a Singapore-based consultancy. “Trade deficits are a problem. At any moment there could be an angry Donald Trump in your face or a Twitter coming your way. Have other countries woken up to this problem? Perhaps not.”

Here is a look at the U.S.’s trading arrangements with its main partners in Asia, arranged according to the size of their trade surplus: 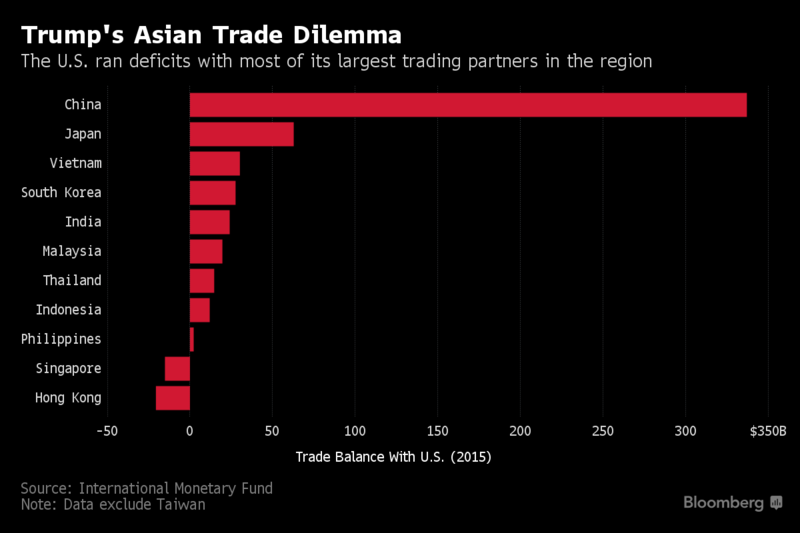