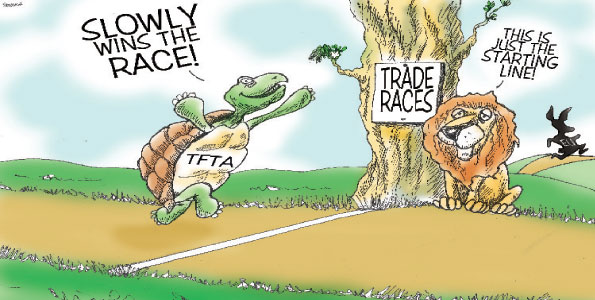 Member states of the tripartite free trade area have until December to ratify the TFTA agreement before it comes into force in January.

The trade agreement, establishing a single market for 26 African countries, will only come into force once ratification is attained by two thirds of the membership.

A total of 16 countries, including all the East African partner states, have signed the TFTA agreement since its launch in Egypt last month.

“Swaziland was the latest country to sign the agreement and the only Southern African Customs Union (SACU) member to sign,” said Peter Kiguta, EAC Director-General in charge of Customs and Trade, adding that TFTA partner states have to present the signed agreement to their respective parliaments or Cabinets for ratification to meet the deadline.

“Following the launch, the deal will only go into force upon ratification of the text by two-thirds of the TFTA member states,” he added. “The signing of the agreement in Egypt was a sign of commitment by the individual countries but the implementation will only commence once the agreement has been ratified.”

It is expected that once the Tripartite FTA is implemented, it will form the building block for the continent-wide free trade agreement, known as the Continental FTA. However, member states are yet to agree on two of the 43 Articles — one on the rules of origin and the other on dispute settlement.

The two articles require that tripartite member states not impose quotas on imports or exports on their TFTA partners. They are also required to eliminate non-tariff barriers.

The dispute settlement article covers trade in services such as intellectual property rights and competition policy, as well as trade development and competitiveness among member states.

Southern African countries are yet to agree on the general exceptions on trade in gold, silver, precious stones and strategic metals.

According to Mr Kiguta, negotiations have commenced on outstanding issues of rules of origin, trade remedies and dispute settlement as part of the post-signature implementation plan agreed upon by the member states in the agreement framework adopted in Egypt.

“The challenge is on harmonising differential rules of origin as the EAC and Comesa regimes in this area are significantly different from the ones used by SADC,” said Mark Ogot, senior assistant director at Kenya’s Ministry of East African Affairs, Commerce and Tourism.

TFTA experts have suggested that where rules are common (including wholly originating), 35 per cent ex-works costs (distribution and logistics) should be retained as an interim option. If enacted, such a move would mean that products on which these value-added criteria of 35 per cent ex-works cost apply could gain duty-free regional market access.

“The negotiations are on product- specific rules of origin,” noted Mr Ogot. “The final outcome is hard to predict.”

Although the provisions of the tripartite agreement favour a single value-added rule as in the EAC and Comesa regional agreements, negotiations are now moving from a percentage-based approach towards a product-specific approach, which will involve defining specific rules for numerous product categories (those covered by divergent rules of origin).

The other challenge is the restrictions on movement of people, minerals and fragile sectors that stand in the way of three trade blocs.