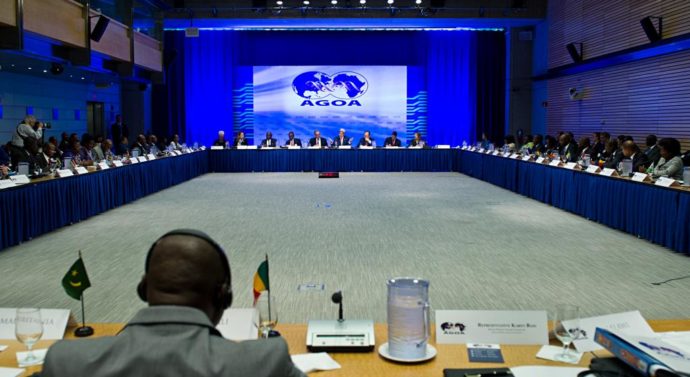 With the Trump administration’s trade agenda focused on reining in China and renegotiating the North American Free Trade agreement, Africa has barely appeared on the radar screen.

That could change this week as President Donald Trump’s top trade negotiator and other senior U.S. officials head to the West African nation of Togo to review a Clinton-era free trade pact with sub-Saharan Africa, in the administration’s first high-level delegation to visit the region.

Looming over the two-day ministerial is China’s growing role in African trade and influence, as Beijing finances massive infrastructure projects in the region, some through its new Asian Infrastructure and Investment Bank.

Also at issue is whether the Trump officials, led by U.S. Trade Representative Robert Lighthizer, will signal a desire to change the trade agreement before it expires in 2025. Trump has sought to bolster his "America First" campaign by withdrawing from the Trans Pacific Partnership, threatening to rip up NAFTA and seeking to renegotiate the U.S.-South Korea free trade deal.

Launched in 2000, the African Growth and Opportunity Act (AGOA) has been barely mentioned by any Trump officials.

But no moves toward an early renewal or extension of AGOA are expected, said Constance Hamilton, deputy assistant U.S. Trade Representative for Africa.

Lighthizer will stress the importance to the administration of deepening its trade relationship with Africa, but will also caution that African countries should "engage in fair trade, eliminate barriers to U.S. exports and abide by the eligibility criteria of the AGOA program," said Hamilton.

The U.S. trade deficit with the 38 AGOA countries shrank to about $7.9 billion last year from a peak of $64 billion in 2008, as U.S. shale oil production increases have lessened the need for oil imports from major exporters Nigeria and Angola.

Overshadowing the talks will be an "out-of-cycle" review of AGOA trade benefits to Rwanda, Uganda and Tanzania, which have supported a phased ban on imports of second-hand clothing. U.S. groups say the move violates AGOA rules.

"The fact that we accepted the petition under the Trump administration, I won’t say that means we’re any harder on any countries, it just says we respect the criteria," said Hamilton, who emphasized that the issue was still under review by USTR.

The administration has paid little attention to developing a U.S.-Africa policy, said Kim Elliot, a trade expert at the Washington-based Center for Global Development.

"This administration has just shown almost zero interest in Africa," said Elliot. "It has not been a big focus, there is no sign at all that it has engaged the president’s interest."

AGOA, in its current form, will likely become irrelevant for a number of markets by 2025, he said.

"Those governments that want to continue to count on the U.S. market need to be prepared to come to the table to have bi-lateral or regional trade talks - whether they are called a free trade agreement or something different," Eisner said.

"We’re not going to see AGOA stretching out to infinity, so eventually we will move into some other kind of arrangement, and that could include bilateral or larger free trade agreements with parts of Africa," he said.