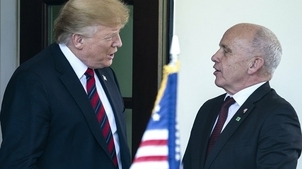 WASHINGTON (Reuters) - U.S. President Donald Trump is keen to advance talks with Switzerland on a free trade deal, Swiss President Ueli Maurer told reporters in Washington after the first visit by a Swiss president to the Oval Office.

Maurer described the meeting with Trump as constructive and said the U.S. president was “positive” about work on a free trade deal, but wanted to get it done “more quickly than with the EU (European Union).” Specific details were not discussed, he said.

“He thinks we should accelerate the issue,” Maurer told reporters after the meeting.

The United States and the European Union are working to launch trade negotiations but the process has taken longer than expected.

Bilateral Swiss-U.S. trade in goods and services totaled $122 billion in 2017, according to data from the U.S. Trade Representative’s office.

Maurer and Trump had been due to meet at the World Economic Forum in Davos, Switzerland in January, but Trump canceled his attendance due to a U.S. government shutdown.

“The fact that Switzerland - a Swiss president - was invited to the White House for the first time confirms that we have good relations ... and that there is a desire to deepen them,” Maurer said. “That was an important step which I am convinced will be followed by others.”

He said the two leaders also discussed Iran, where Switzerland provides protective and consular services for some 100 U.S. citizens and 12,000 people with both U.S. and Iranian citizenship, but declined to give further details.

The White House earlier said Trump discussed crises in the Middle East and Venezuela in the meeting with Maurer, expressing gratitude for Switzerland’s role in facilitating diplomatic relations on behalf of the United States.

Switzerland is ready to play a similar role in Venezuela, but is waiting for approval by Caracas, Maurer said.

Also on the agenda, Maurer said, were China and Huawei Technologies Co Ltd, which the U.S. Commerce Department on Thursday formally placed on its “Entity List” - a move that bans the Chinese telecom giant from buying components from U.S. companies without U.S. government approval.

Maurer, who met with Chinese President Xi Jinping in Beijing in April, said his country had chosen a different path in dealing with China than Washington, preferring to advocate for its values directly with Beijing.

He said Switzerland had banned all foreign companies from providing services or hardware for its critical infrastructure, but Huawei was present in the private commercial market.