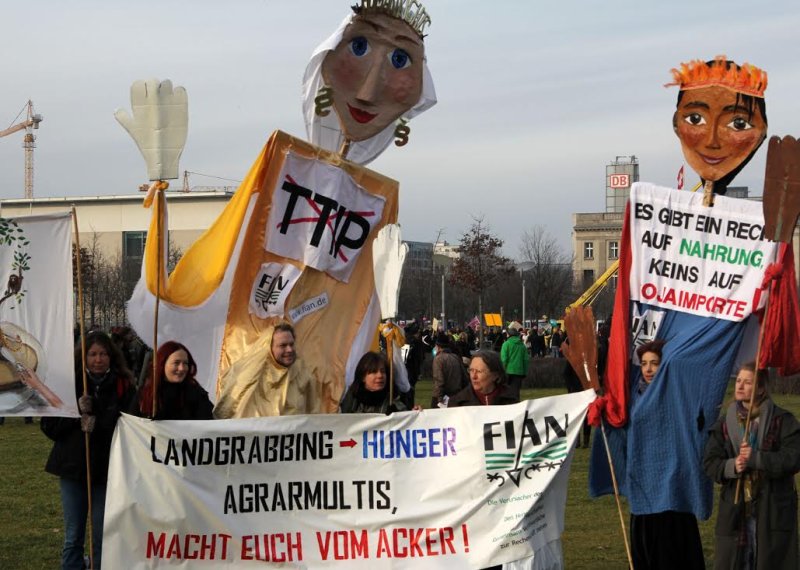 EXCLUSIVE / Plans for a sweeping EU-US free trade deal known as TTIP risk being blown off course by civil society fears about the damage it could wreak on environmental and social protections, according to a leaked EU document seen by EurActiv.

Negotiations between the US and the EU on the Transatlantic Trade and Investment Partnership (TTIP) started in July 2013.

If successful, the deal would cover more than 40% of global GDP and account for large shares of world trade and foreign direct investment. The EU-US trade relationship is already the biggest in the world. Traded goods and services are worth €2 billion.

TTIP would be the biggest bilateral trade deal ever negotiated, resulting in millions of euros of savings for companies and creating hundreds of thousands of jobs. It is claimed that average European households would gain an extra €545 annually, and that Europe’s economy would be boosted by around 0.5% of GDP, if such a deal was fully implemented.

Brussels and Washington have set an ambitious goal of completing negotiations by the end of 2014.

The preparation paper for an EU-US Summit on 26 March, which is marked as ‘restricted’, identifies the Trans-Atlantic Trade and Investment Protocol (TTIP) as a “clear vector for jobs and growth for both the EU and US”.

But it warns that “stakes are high” in the race to thrash out a deal, with “challenges on both sides of the Atlantic that need to be managed.”

“For instance, the increasing interest of civil society in TTIP, transparency issues and the supposed risks for environmental and social standards have the potential to affect the political dynamics of the negotiation,” the document says. It may be received as a shot across the European Parliament’s boughs.

Without precise language – notably absent from a planned EU-Canada free trade deal – investor-state disputes mechanisms covering these areas “could hamper the EU and member states in efforts to establish regulations seeking to protect their citizens or the environment,” the report said.

It called for lawmakers to closely monitor TTIP texts, increase public awareness about their potential dangers, and “recognize that the strongest action that the European parliament could take to impact TTIP would be not to give its consent to the negotiated agreement.”

‘A mushrooming of doubts’

To counter this kind of opposition, a Commission TTIP communications strategy leaked to the Danish journal ‘Notat’ last November called for a new and “radically different” PR approach that could “reduce fears and avoid a mushrooming of doubts.”

Top of the paper’s ‘key issues to watch’ was “anxiety around the potential impact on the European social model and approach to regulation” of a TTIP agreement.

Previous leaked documents obtained by EurActiv show that the text for any trade deal between the EU and US would include provisions for investors to sue states if their ‘legitimate expectations’ of profit were damaged by subsequent environmental or social legislation.

In the past, such measures have allowed one company to take out a $250 million lawsuit against Quebec for banning hydraulic fracturing (or ‘fracking’) under the North American Free Trade Agreement (Nafta).

Similarly, Mexico was ordered to pay Tecmed $5.5 million for relicensing a waste treatment plant out of environmental concerns, because it had not consistently acted in a manner “free from ambiguity and totally transparently.”

“The Agreement will aim at enhanced mutual access to public procurement markets at all administrative levels (national, regional, local), and in the fields of public utilities […] ensuring treatment no less favourable than that accorded to locally established suppliers,” according to a separate leaked ‘nature and scope’ document seen by EurActiv.

All procurement bodies, sectors – particularly public constructions – thresholds and service contracts would be covered, says the paper, which is marked ‘trade-sensitive’.

US companies might thus have legal recourse under ‘fair and equitable treatment’ clauses, also proposed in the text, if a European country decided to, for example, extend state-backed healthcare provisions. Worries about this have already been aired in the UK.

Following a stock-taking meeting with the US trade representative Michael Froman, on 18 February, the EU’s trade commissioner Karel de Gucht called for more ambition on public procurement and said that TTIP’s regulatory aspects would be "the toughest nut to crack".

He also called for "a fear-based debate" to be avoided, saying the European Parliament would not tolerate a deal that compromised social standards.

The summit preparations document, which is dated 5 February, also lists the US legislature and ongoing fallout from the NSA surveillance row as “difficult obstacles” to an EU-US trade deal.

“The summit will be an important moment to secure President Obama’s continued personal commitment to the TTIP,” it says. The meeting’s agenda will also include the economy, efforts to cool the NSA spy row, and foreign policy cooperation.

It notes “significantly strengthened foreign policy cooperation” as a countervailing trend to the foreseen snags, citing Ukraine, Iran, Syria, Serbia-Kosovo and the increased development of common security and anti-terrorism missions in the Horn of Africa, Sahel, Libya and Central African Republic.

In the Middle East, where the EU has issued new guidelines on the labelling of produce from Israeli settlements, the text says that “the EU has delivered active backing to US-led efforts… with major incentives for a sustainable peace under preparation.”

Brussels has been a strong supporter of ongoing attempts by the US secretary of state John Kerry to agree a framework plan between Israel and the Palestinian Authority.

The final item on the conference diary is advancing “increased ambition” to achieve a robust global agreement at the Paris climate change conference in 2015.

End of 2014: Negotiators hope to agree a TTIP text