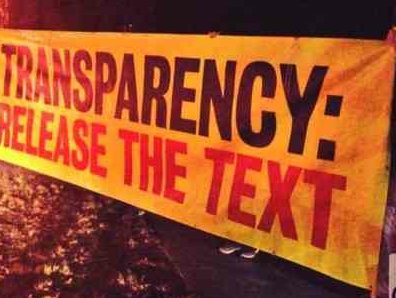 A trade official from America’s largest labor union said that chief negotiators of TTIP agreement persisted to show contempt for transparency in Miami this week by failing to provide any meaningful details to the deal’s most critical stakeholders.

WASHINGTON (Sputnik), Michael Hughes — Chief negotiators of the Transatlantic Trade and Investment Partnership (TTIP) agreement persisted to show contempt for transparency in Miami this week by failing to provide any meaningful details to the deal’s most critical stakeholders, a trade official from America’s largest labor union told Sputnik.

On Monday, the week-long eleventh round of TTIP talks got underway in Miami, Florida, during which negotiators are supposed to finalize the precise language of the agreement.

"They [TTIP negotiators] do a great job of keeping their text and what they are working on a secret," American Federation of Labor and Congress of Industrial Organizations (AFL-CIO) Trade Policy Specialist Celeste Drake told Sputnik on Wednesday.

Drake, who has been on the ground meeting with negotiators in Miami since Monday, provided Sputnik a window into the murky world of how international trade agreements are consummated and how adept the primary interlocutors are at protecting information.

Wednesday, Drake explained, was "stakeholder day" which encompassed participants taking a break from the TTIP talks to listen to ten-minute presentations delivered by representatives like herself from labor unions, environmental groups and human rights organizations.

"Then, at the end of the day, they held the stakeholder briefing," Drake said. "Chief negotiators sat on a stage and they did a short introduction each, explaining the work that they did all week without providing details."

The chief negotiators offered up shallow summaries and talking points while withholding probably some of the most critical aspects of the trade agreement, she claimed.

"But when you can’t see the details, a glowing, rosy summary of how wonderful it is, isn’t helpful," Drake asserted.

US President Barack Obama, she added, and his administration have worked really hard to avoid the "secretive" label, yet have failed to allow the TTIP or the Trans-Pacific Partnership (TPP) talks to be more transparent and democratic.

The United States, she added, has a tendency to announce the dates and locations of these rounds of trade talks as late as possible as a way to "minimize public input and stakeholder participation."

Drake said the office of the US Trade Representative (USTR), for example, did not apprise them of the exact location of the talks, which are being hosted at the Hyatt hotel, until Friday.

The Europeans, for their part, have at least made a commitment, however belated, to post TTIP chapters negotiated on a website after each round.

"On Monday we should be able to see what the Europeans put on the table for the sustainable development chapter," Drake said. "There is no reason the United States cannot meet that standard, unless they don’t want to."

The AFL-CIO, she noted, was joined in Miami by a host of civil society groups, such as Public Citizen, Global Trade Watch, Moveon.org, Friends of the Earth, the Center for International and Environmental Law and other local activists.

The hotly-debated TTIP agreement seeks to deregulate trade between the United States and Europe and create the world’s largest trade zone, encompassing over 60 percent of global production.