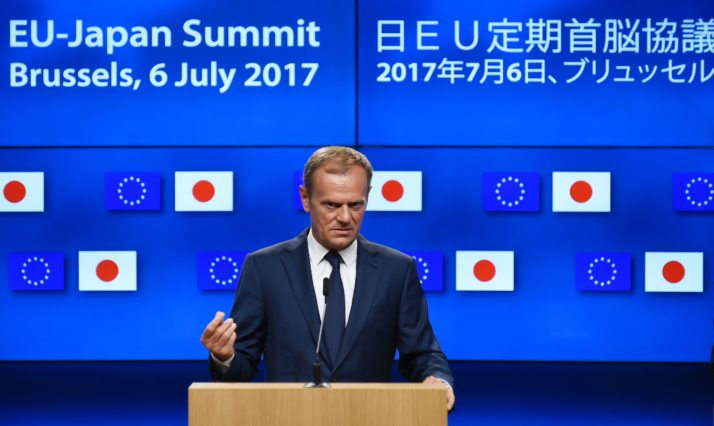 Uncertainty is pushing the EU to speed up its trade deals

In the wake of the disruption of trade rolling out of Washington, the European Union is accelerating its drive to lock down as many import-export agreements as it can. In recent months, the bloc has completed deals with Japan and Singapore, updated an agreement with Mexico, authorized talks with Australia and New Zealand, and made progress with the Common Market of the South, the South American trade bloc known as Mercosur.

While the EU push for free trade isn’t new (it struck agreements with South Korea in 2010 and Canada in 2014), Donald Trump’s White House has given its pursuit of additional deals new impetus. But concern about the possible re-emergence of protectionism around the world isn’t the only thing driving the EU’s campaign. Europe’s population is aging, and its growth rates aren’t keeping up with those of emerging nations. Aware of this, the bloc is moving to put its stamp on global trade while it can.

In preparation for Stratfor’s upcoming 2018 Third-Quarter Forecast, we are releasing a series of supporting analyses, focusing on critical topics, regions and sectors. These assessments have been designed specifically to contextualize and augment the quarterly global forecast.

In the 2018 Annual Forecast, Stratfor noted that one of the main foreign policy goals for the European Union would be to negotiate and sign free trade agreements around the world. Recent developments confirm this forecast, because the bloc is trying to make negotiations more efficient and is seeking to become more flexible on subjects that were former obstacles.

To boost the tempo of trade talks, the European Union is trying to make the negotiations process as efficient as possible. In late May, it approved a new mechanism allowing the system to solve disputes between private investors and states in the trade deals to be negotiated separately from the core trade agreement. The dispute-resolution system had proved to be a sticking point in other trade deals because it must win approval not only from national parliaments in each EU member state, but also from many of those states’ regional parliaments. The core trade deals are subject to approval only by national parliaments. This clarification would prevent a repetition of the problem that emerged with the Canada-EU free trade agreement when a reluctant regional parliament in Belgium threatened to collapse the entire deal. It also follows a recent ruling by the European Court of Justice that determined how trade agreements should be ratified.

In addition, the European Union is becoming somewhat more flexible on its more difficult topics. Historically, the bloc has been particularly protective of its agricultural sector and is reluctant to open its markets to imported farm products. In recent years, it has softened this position. For example, the Canada deal lifted 94 percent of EU tariffs on Canadian agricultural products and 96 percent of tariffs on its fish and seafood. The EU-Japan agreement established that the tariffs on 85 percent of agricultural and food products will be removed progressively. Still, agriculture remains a strong export interest for the European Union, which insists on including geographic descriptors in its trade agreements (to make sure, for example, that only cheese made in specific regions of northern Italy can be sold as "Parmesan" in its trading partner countries).

The bloc is also becoming slightly less protective about vehicles. One of the most complex issues that arose during negotiations with Tokyo was Brussels’ reluctance to lower tariffs for Japanese cars entering the European market (a key Japanese demand to sign the deal). But the European Union eventually agreed to lift the 10 percent tariff on passenger cars made in Japan over a period of seven years and to immediately lift the 3 to 4 percent tariffs on imported auto parts. German and EU officials have also expressed interest in including vehicles in a possible agreement with the United States as a way to appease U.S. criticism of EU-U.S. trade imbalances on manufactured goods. 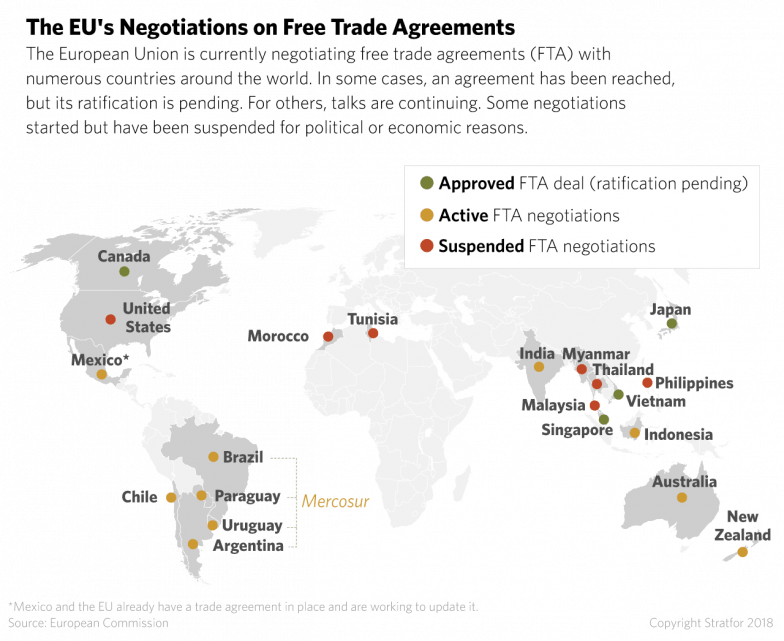 The road ahead is not without its barriers. As usual, voting mechanisms within the bloc present an obstacle. The European Commission negotiates trade agreements on behalf of member states, but the final document has to be approved by the national governments. In some cases, only a qualified majority is required to approve the deal, but agreements covering intellectual property, foreign direct investment and many services would require unanimity. Considering that modern trade agreements tend to include all these areas, individual member states still have veto power over the final deal. Some member states also have their own individual prohibitions: France, for example, refuses to sign trade deals with countries that are not part of the Paris climate agreement. This would present a problem in negotiating with the United States.

While the European Union is becoming more flexible about agriculture, it remains a sensitive subject. The bloc continues to oppose hormone-treated beef and genetically modified organisms. Disputes over beef, ethanol and sugar have delayed negotiations with Mercosur, and the agreement with Japan reduces, but does not eliminate, tariffs on beef and retains quotas for some cheese products. In talks with major producer Australia, agriculture will probably be one of the main stumbling blocks. Meanwhile, the European Union is likely to be reluctant to include agriculture in any negotiations with the United States, a farming powerhouse.

The increasingly complex nature of trade agreements presents another complicating factor. On top of traditional topics such as tariffs and non-tariff barriers, recent negotiations have included business-state dispute settlement, intellectual property rights and data flows. The European Union tends to be protective of all of these areas, and that defensive stance will create obstacles for future deals. For example, one of the reasons that the U.S.-EU talks over the Transatlantic Trade and Investment Partnership collapsed in 2016 was the failure to reach agreement on a mechanism to solve disputes between private investors and states. That continues to be a touchy topic in Europe — to the point that the European Union and Japan decided to negotiate it separately from the main deal. The issue of cross-border data flows and data protection was also a significant stumbling block in EU negotiations with Japan. The governments in Brussels and Tokyo have been discussing mechanisms to ease transfers of personal data for commercial purposes since 2017, but no deal has been struck.

Local and national politics will create possibly the biggest obstacle to future trade agreements. While EU institutions promote free trade agreements as a way to create economic growth and jobs, opponents across the Continent — including nationalist political parties, farmers and consumer protection groups — argue that these deals actually destroy jobs, lower the standards for products such as food and give too much power to multinational companies. Considering that nationalist and populist political forces are strengthening in Europe, national resistance to trade agreements is likely to remain strong, especially when negotiating with large countries such as the United States.

During the 1990s and early 2000s, the European Union supported the multilateral liberalization of trade. But when World Trade Organization negotiations virtually froze in the late 2000s, the Continental bloc shifted its focus to bilateral agreements. Now, two motivating forces are driving the bloc’s pursuit of free trade deals. The first is economic: Europe is worried about the future of global trade and wants to secure agreements with as many partners as possible. But this strategy also has a geopolitical dimension: Brussels is searching for allies to defend open markets and is seeking to expand its sphere of influence amid tensions with the United States. In fact, EU Trade Commissioner Cecilia Malmstrom recently described the negotiations with Australia as a part of a European strategy to expand its "circle of allies" and to remove trade barriers as the White House makes moves that could trigger a global trade war.

The other motivation is more fundamental. The bloc remains one of the pillars of world trade. With roughly 7 percent of the world’s population, it accounts for about 20 percent of global exports and imports. But the Continent is worried that its proportion of global trade, and therefore its influence, is in decline. Its aging population is expected to contract in the coming decades, and its economic growth is starting to lag that of other countries. These factors mean that the Continent’s influence on the global political and trade policy architecture will likely decrease in the not-so-distant future. Europe knows that it must try to shape the rules and conditions of global trade while it still can.