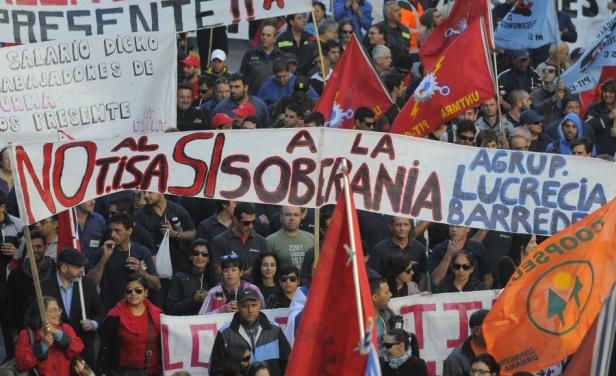 The executive branch will still make a final decision over the matter, to be presented in October.

The ruling progressivist coalition Broad Front overwhelmingly decided to withdraw Uruguay from the negotiations on the supra-national trade-deal TISA (Trade in Services Agreement) in a vote on Saturday.

With a 117 to 139 vote, the decision was backed by the Movement of Popular Participation (of former President Jose “Pepe” Mujica), the Communist Party, the 711 list (of Vice President Raul Sendic), the Party for the Victory of the People (PVP), the Great House (Casa Grande), the Federal League, and the Socialist Party (of current President Tabare Vazquez).

The Socialist Party stated that it was necessary to “politically value the timely moment to end the presence in the negotiations depending on the criteria approved by the last congress” of the Broad Front, which won the elections last October.

A few other political factions preferred remaining in the negotiations, including Assembly Uruguay (of Minister of Economy and Finances Danilo Astori) and Progressivist Alliance (of Minister of Foreign Relations Rodolfo Nin Novoa.)

“We express our satisfaction with our government’s behavior, via the president, to consult its political force,” tweeted the National Secretary of the Socialist Party Gonzalo Civila Lopez.

Now, the executive branch will make a definitive decision on the matter which is to be presented in October. However, even if they decide to continue the negotiations and sign the deal, the decision will require a vote in congress, where the Broad Front holds a majority.

Earlier in September, Nin Novoa defended the idea of remaining in the negotiations, saying, “I am not a supporter of TISA but I believe in the responsibility that we have as a country, because if we withdraw in the middle of the negotiations, no one will ever negotiate again with Uruguay.”

He emphasized that the government would never sign a deal where the interests of the country were not preserved, and that even he was waiting for the position of the coalition. Congress, however, has the final word.

In June, Wikileaks released 17 classified documents about the secret TISA negotiations which started in 2013 between 24 countries, including the United States and the European Union.

According to WikiLeaks, the TISA negotiating text would impose obligations on countries “to notify and consult with transnational corporations on decisions and measures which may affect their interests.”

A month later, a similar leak showed how the TISA would undermine “governments involved in the treaty” by promoting the interests of multinationals rather than local businesses, according to a WikiLeaks press release.