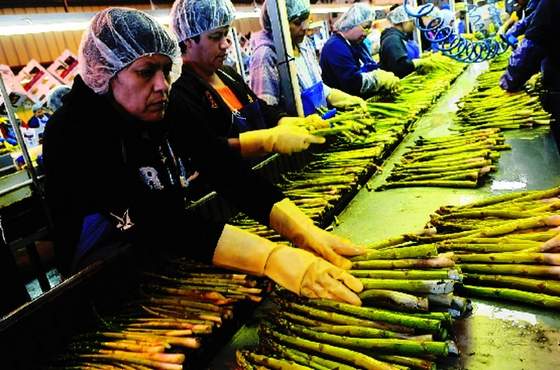 Maria Serrano sorts asparagus on the production line at Kings Crown Packing Inc. north of Tracy in April. U.S. growers hurt by the importation of asparagus from countries with lower production costs are being offered some financial relief. (Michael McCollum/Record File 2010)

California asparagus growers, including many in the Delta, are eligible for a share of $15 million in federal funds to help offset losses suffered as imports from Mexico and Peru eroded their market share.

Industry officials said the U.S. asparagus industry continues to struggle with import competition due to the North American Free Trade Agreement and the Andean Trade Preferences Act. Both granted duty-free status to imports from the two major asparagus-producing countries.

Compensation will be based on a grower’s commercial production in 2003 and claims of market losses in 2004-07. To be eligible, farmers must have grown and sold crops in both 2003 and 2007.

Between those years in San Joaquin County, which leads the state in asparagus production, the estimated annual harvest fell by nearly half, to 14,000 tons from 26,600 tons, and sales value by one-third, to $20.4 million from $30.3 million.

The federal compensation will be evenly split between crops destined for the fresh market and asparagus grown for processing.

California farmers primarily sell into the fresh market, while Washington and Michigan produce more for processing.

Payments will be capped at $100,000 per grower in each category and may be reduced proportionally if claims exceed available funds.

While he welcomes the announcement, asparagus producer Edward Zuckerman said the funds won’t make up for all the losses.

Still, he added, "Any help is better than nothing."

"They’re going to gladly take the money because they were hurt, they were severely hurt, by trade and foreign polices implemented by the federal government," she said.

Perhaps the larger victory was winning recognition from federal officials of the harm done to domestic asparagus producers.

He said federal officials should keep that in mind as they negotiate similar pacts in the future.

Asparagus producers have until April 8 to apply for the compensation program.