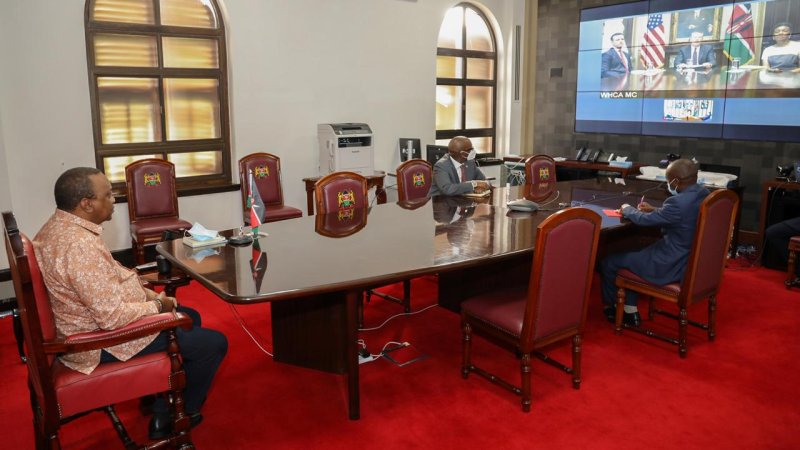 The U.S. and Kenya began negotiations in July 2020 on a comprehensive Free Trade Agreement (FTA). For Kenya, perhaps the largest possible advantage of a U.S. FTA is that such an FTA could provide more permanence in Kenya’s ability to export to the U.S., duty-free, Kenyan apparel and other products. The U.S. is now Kenya’s second largest export market, absorbing 9% of Kenya’s exports. Most of Kenya’s current exports to the U.S. are apparel.

Kenyan exports to the U.S. now benefit from the unilateral U.S. African Growth and Opportunity Act (AGOA), which generally grants duty-free treatment to imports from sub-Saharan African countries. There is some concern among sub-Saharan exporters that the U.S. Congress will not extend AGOA beyond its current 2025 sunset date.

For the U.S., a Kenya FTA can reduce barriers to U.S. exports to Kenya. Kenya is now only about the 96th largest U.S. export market for goods. Leading U.S.-exported goods include aircraft. However, the U.S. FTA negotiating program typically includes more than mere exports of U.S. goods. Rather, it encompasses negotiating elimination of foreign law barriers with respect to U.S.-originating non-financial and financial services, investment, intellectual property, digital content, and procurement by foreign governments and foreign-government-owned enterprises. Thus, a Kenya FTA would probably lead to more U.S. services and direct investment in Kenya, as well as more goods exports to Kenya.

Perhaps more importantly, commentators have noted that a Kenya FTA can assist U.S. geopolitical aspirations in East Africa. Increased commerce engendered by a Kenya FTA would support the U.S. counter-terrorism effort against Al-Shabbab, counteract the Chinese Belt and Road initiative, and provide a template for bilateral FTAs with Kenya’s co-members in the African Continental Free Trade Area, which is scheduled to take effect in 2021.

Nevertheless, there are potentially contentious issues creating obstacles to the smooth negotiation of a Kenya FTA. These include the timing and extent of Kenyan tariff liberalization on U.S. agricultural exports; Kenyan rules on data protection, intellectual property rights and foreign investment, and Kenyan level of labor and environmental protections. Further, Kenya’s 1.5% tax on digital services revenue, scheduled to take effect in 2021, has already prompted calls by U.S. internet companies for possible trade sanctions against Kenya. A brief summary of a few U.S. tax aspects of interest to U.S. C corporations considering forming a Kenyan corporate subsidiary is below. There are, however, alternative structures which do not involve U.S. C corporations, such as a check-the-box Kenyan entity directly owned by U.S. individuals, or a Kenyan corporation owned by U.S. individuals who elect under tax code Section 962, which in some circumstances is more favorable for U.S. investors.

As a stimulus measure in response to the Covid-19 pandemic, in 2020 Kenya reduced its generally applicable mainstream corporate income tax rate to 25%, from 30% in 2019. The overall result, from the viewpoint of a U.S. parent corporation subject to the lower 21% U.S. corporate income tax rate, may well be that a Kenyan subsidiary generates a tax cost in excess of available U.S. foreign tax credits.

The cornerstone of the U.S. international tax regime on U.S.-based multinationals is the requirement that such U.S. parent corporations include in their current taxable income their share of the Global Intangible Low-Taxed Income (GILTI) of their foreign subsidiaries, whether or not received by the U.S. parent as distributions. Profitable U.S. parent C corporations are generally allowed a deduction for 50% of their GILTI, producing an effective U.S. corporate income tax rate of 10.5% (50% x 21%) on GILTI. For example, a U.S. parent C corporation whose sole foreign subsidiary benefits from a 0% Kenyan corporate income tax rate under the Kenyan Export Processing Zone program, which subsidiary operates with leased buildings and equipment, would generally be subject to a U.S. GILTI tax of 10.5% on the Kenyan subsidiary’s income, whether or not distributed.

However, a U.S. corporate income tax credit is allowed for 80% of the foreign corporate income taxes paid by foreign subsidiaries on the GILTI. The U.S. tax credit is subject to various limitations. For example, if the U.S. parent has a domestic net operating loss, and thus no U.S. pre-credit U.S. tax liability, there is no GILTI tax credit in the loss year or any carryover year. Further, the U.S. tax credit against GILTI is limited to the pre-credit U.S. tax related to the GILTI, after such GILTI is reduced by U.S. parent’s own interest expense and other expenses allocated to that GILTI.

Kenya enacted a corporate tax equal to 1% of turnover effective in 2021.

This 1% turnover tax (and the Kenyan subsidiary’s 1.5% digital services revenue tax, if any) are potentially creditable against the Kenyan subsidiary’s pre-credit mainstream Kenya corporate income tax liability, thereby resembling a Kenya corporate minimum tax. However, since they are based on gross rather than net income, they raise concerns as to U.S. creditability.

A Kenyan subsidiary of a U.S.-based multinational, subject only to the 25% Kenya corporate tax, might initially generate a potential GILTI tax credit to the U.S. parent of around (80% x 25%) = 20%, if the Kenya-taxable income approximated the U.S. GILTI, and the Kenya tax was creditable. This would ordinarily be enough to shelter the 10.5% pre-credit U.S. tax on the GILTI generated by the Kenyan subsidiary itself, and also generate additional GILTI tax credits, which the U.S. parent could then use to shelter from U.S. tax the U.S. parent’s GILTI generated by its tax-haven foreign subsidiaries.

Unfortunately, the various U.S. limitations rules often operate to reduce or eliminate the benefit of the GILTI tax credit generated from Kenyan and other high-tax subsidiaries, and thereby in effect create a marginal U.S. corporate tax from even high-taxed GILTI. Favorably, however, the U.S., in July 2020, issued regulations that generally allow a U.S. parent corporation to elect, when advantageous, to exclude from GILTI the income of all its Kenyan and other foreign subsidiaries which are effectively subject to tax in their home non-U.S. country at least at a 18.9% rate.

U.S. C corporations may be entitled to a special deduction, generally resulting in a reduced 13.125% effective tax rate, on their Foreign-Derived Intangible Income (FDII). FDII is based upon a portion of a U.S. corporation’s net income derived from the U.S. corporation’s sales of goods, services, and intangibles, to foreign customers for foreign use.

The final July 2020 U.S. FDII regulations contain substantiation requirements for a U.S. exporter to establish that property is eligible because it was sold to a Kenyan or other foreign customer for Kenyan or other foreign use. In many cases, the U.S. exporter will need to receive documentation from its Kenyan customer verifying the non-U.S. use of the property. For example, a U.S. exporter of a small aircraft to a Kenyan rancher may need to show the U.S. proof that the rancher registered the aircraft with the Kenyan Civil Aviation Authority and hangared the aircraft in Kenya.

Base Erosion and Anti-Abuse Tax

Under the U.S. Base Erosion and Anti-Abuse Tax (BEAT) rules, generally, U.S. C corporate groups with at least $500 million of annual gross receipts, and paying at least 3% of their deductible expenses in the form of certain interest, royalties, and certain service fees, to foreign affiliates, can be subjected to a minimum corporate income tax, at a 10% rate, on their income, without regard to such deductions, and without any foreign tax credits.

BEAT can arise as an issue for payments to Kenyan subsidiaries where a large U.S. affiliate of a U.S.-based or foreign-based multinational, such as a package delivery company that picks up packages in the U.S. and delivers them abroad, interfaces with U.S. customers to provide them services in locations that include, but are not limited to, Kenya, receives payments from those U.S. customers, and then subcontracts the Kenyan component of those services to a Kenyan subsidiary. Such subcontract payments could trigger BEAT exposure to the U.S. affiliate. Having the Kenyan and other foreign affiliates contract directly with the U.S. customer, or having the U.S. affiliate contract directly with the Kenyan affiliate’s unrelated Kenyan service providers, is often impractical. Unfortunately, the final December 2019 U.S. BEAT regulations did not offer blanket relief for such “pass-through” situations. Conclusion

U.S. companies considering expansion in East Africa, and Kenyan exporters to the U.S., will wish to monitor the progress of the U.S.-Kenya FTA negotiations. U.S. companies will need to consider how their GILTI, FDII and BEAT situation will affect their proposed Kenyan transactions.