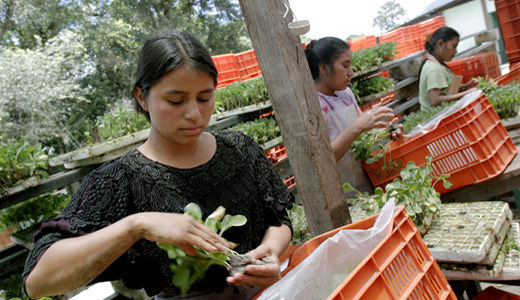 WASHINGTON (Reuters) — The United States said on Tuesday it was requesting a dispute settlement panel to hear its year-old complaint that Guatemala has failed to protect workers’ rights as required under a free-trade agreement.

"While Guatemala has taken some positive steps, its overall actions and proposals to date have been insufficient to address the apparent systemic failures," U.S. Trade Representative Ron Kirk said in a statement.

The action is taken under the Dominican Republic-Central American Free Trade Agreement, known as CAFTA-DR.

The Obama administration is hoping to win approval of three long-delayed free trade pacts with South Korea, Panama and Colombia when Congress returns in September from its recess.

U.S. labor groups strongly oppose the pact with Colombia, which they call the most dangerous country in the world for trade unionists because of the Andean nation’s history of anti-union violence.

Guatemala could potentially face millions of dollars in fines if the panel finds it has violated CAFTA-DR.

"With this case, we are sending a strong message that the Obama Administration will act firmly to ensure effective enforcement of labor laws by our trading partners," Kirk said.

The AFL-CIO labor federation and six Guatemalan unions filed a complaint in April 2008, accusing the Guatemalan government of failing to effectively enforce laws guaranteeing workers the right to organize and bargain collectively as well as the right of association and acceptable conditions of work.

Following an investigation also involving the State Department and the Labor Department, the U.S. Trade Representative’s Office formally requested talks with Guatemala on the issue in July 2010.

At the time, Kirk also expressed concern that anti-labor violence was escalating in Guatemala, but said that was not part of the United States’ formal trade complaint.

The United States and Guatemala held two rounds of talks on the labor concerns in late 2010. Washington ratcheted up the pressure in May, when it requested a meeting of the CAFTA-DR Free Trade Commission to discuss the matter.

Democrats in the U.S. House of Representatives cheered the action, even though they overwhelming opposed the CAFTA-DR agreement when it was put to a vote in 2005 on the grounds its workers rights protections were not strong enough.

"We applaud the Obama administration for taking action in view of the failure of Guatemala to implement even the worker standards obligated under CAFTA as negotiated," said Representative Sander Levin, the top Democrat on the House Ways and Means Committee.

Guatemala is one of the poorest countries in Latin America and mainly exports goods like clothing, flowers, jewelry, coffee and raw materials to the United States.