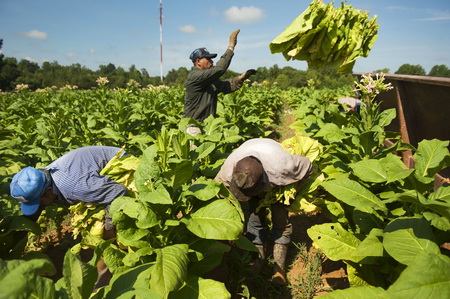 Workers pick flue-cured tobacco leaves during the harvest on land leased by Eaton Farms in Kernersville, North Carolina, US, in 2012. The US government has sought to include tobacco the Trans-Pacific Partnership, which would enable tobacco companies to use trade rules to sue countries that enact anti-smoking laws deemed to be in breach of the pact, health groups say. PHOTO: BLOOMBERG

By An Dien, Thanh Nien News

Vietnam and other countries involved in the Trans-Pacific Partnership negotiations face aggressive interference from Big Tobacco in the passage and implementation of public health policies, critics warn

The US government has sought to include tobacco in a regional free-trade pact, which would enable tobacco companies to use trade rules to compromise government anti-smoking regulations.

In talks that began August 23 in Brunei for the Trans-Pacific Partnership (TPP), if the US proposal is accepted, Big Tobacco could sue countries that enact anti-smoking laws deemed to be in breach of the TPP, health groups say.

In May 2012 the early drafts of the agreement envisaged creating “safe harbor” provisions protecting national tobacco control measures - like package warnings and advertising and marketing restrictions - from being challenged under the agreement.

Anti-tobacco groups welcomed this proposal, calling for a complete carve-out for tobacco in the TPP pact because tobacco products are “uniquely harmful.”

But the latest US proposal preserves “the ability of the United States and other TPP countries to regulate tobacco and to apply appropriate public health measures" while maintaining the US objective of negotiating a comprehensive trade agreement that does not exclude any agricultural product, Reuters news agency quoted US Trade Representative Michael Froman as saying.

Those in the opposing camp say the language in the new proposal is “far weaker” than that in the original one, failing to cover lawsuits initiated by tobacco companies.

It would not provide nations that adopt strong tobacco control measures with the protection they need from tobacco-industry challenges, US anti-smoking groups like the American Lung Association, American Heart Association, and the Campaign for Tobacco-Free Kids said in a joint statement.

By pushing for the new proposal, the Obama administration has apparently bowed to pressure from Big Tobacco and essentially watered down public health protection, health advocates say.

“[This] is another unfortunate example of how US trade policy is geared more toward protecting the profits of an industry whose products kill nearly six million people every year than toward protecting people’s health in the US and across the Pacific Rim,” John Stewart, director of anti-smoking operations at the Boston-based Corporate Accountability International, told Vietweek.

The TPP is a free trade agreement between the US, Japan, Canada, Mexico, Chile, Peru, Australia, New Zealand, Malaysia, Vietnam, Singapore, and Brunei.

Proponents of the pact see it as key to ensuring the US helps write trade rules in the Asia-Pacific region and is not left on the outside as countries organize manufacturing, agriculture, and services around China.

The Brunei meeting, which wrapped up August 30, was the 19th round of negotiations, which have gone on for more than three years. Discussions are scheduled to continue in September and Washington hopes to conclude the pact by the end of this year.

Critics say the TPP’s content, shrouded in secrecy despite several high-level calls for transparency, is being heavily influenced by more than 600 corporate advisors, drawing heavy criticism from the health, environmental, and labor movements for the toll it is likely to extract on public health and the environment.

US Trade Representative Michael Froman said in a statement that the new tobacco proposal, which is also looking to eliminate foreign tariffs on US tobacco products, reflected inputs from a "wide range of American stakeholders," including members of Congress, health advocates, and farmers.

But anti-smoking groups do not buy into this.

“Though the proposal gives lip-service to protecting health, it plays right into the hands of tobacco corporations,” Stewart said.

The tobacco industry has already challenged Australia and Uruguay for their health warnings and packaging of tobacco.

By doing so, Big Tobacco is sending a clear message to other governments that they too can be challenged if they enact stringent tobacco control measures, experts say.

“The industry knows that it has more money and legal resources than health ministries, so even the simple threat of trade litigation might be enough to shift a government away from health policy,” Jorge Alday, a spokesman for the New York-based World Lung Foundation, told Vietweek.

The US Chamber of Commerce and its allies said they are worried by the precedent set by specifically identifying tobacco regulations as an area where governments can take necessary measure to protect public health, Reuters news agency reported.

In a letter to Froman, the business group said that could encourage other governments "to propose additional product-specific references," which could be used to block a variety of US exports on health grounds.

They argued the standard general exception used in trade agreements dating back to 1947 should be enough to address any concerns about protecting tobacco regulations.

Anti-smoking groups bristle at this claim by the business coalition.

“Tobacco… kills half its users prematurely. The US Chamber of Commerce and its allies have not admitted this fact about the product.”

Tobacco has killed 50 million people in the last 10 years, and tobacco is responsible for more than 15 percent of all male deaths and 7 percent of female deaths, the Tobacco Atlas report, led by the World Lung Foundation (WLF), said last year.

In the report, the WLF and the American Cancer Society said if current trends continue, a billion people would die from tobacco use and exposure this century - or one person every six seconds.

There is an international convention specifically on tobacco, the World Health Organization Framework Convention on Tobacco Control (WHO FCTC), which aims to reduce tobacco use and reverse the epidemic.

The US is the only TPP country that is not a party to the WHO FCTC. The parties, 177 countries including Vietnam, are obligated to reduce tobacco use.

Health advocates also point out that the US Chamber of Commerce has a “long and sordid history” of advancing Big Tobacco’s agenda and mobilizing other front groups to act on the tobacco industry’s behalf.

They say tobacco corporations are lobbying for provisions that would make it easier for them to sue countries for enacting public health measures, often using the US Chamber of Commerce, Congress members, and other trade associations as fronts for their interests.

“It is unbelievable that these trade associations continue to protect the interests of an industry that is driving the largest preventable epidemic of our time,” Stewart said.

The country enacted its first comprehensive tobacco control law last May. But experts say given that Southeast Asia is a key target market for expansion for tobacco corporations, the US’s proposal would leave Vietnam vulnerable to Big Tobacco’s global litigation campaign to bully countries out of backing down on their commitments to public health.

“The US’s failure to take this opportunity to lead in the fight against the largest preventable cause of death on the planet is a slap in the face to countries like Malaysia, Chile, Peru, and Vietnam, which are disproportionately affected by Big Tobacco’s bullying and the epidemic it drives,” Stewart said.

Experts urge Vietnam to push for the exclusion of tobacco in the TPP pact or support other countries in the region that propose similar protections.

Elsewhere in the region, Malaysia has already done so, proposing August 27 a complete "carve-out" of tobacco control measures from the agreement.

It is not clear if Vietnam will also step up to the plate. Progress on the TPP topped the agenda when Vietnamese President Truong Tan Sang visited the US last month, an indication of Vietnam’s keenness to boost trade with its former foe.

But if tobacco is included in the TPP pact, it facilitates increase in tobacco trade and use, which runs contrary to Vietnam’s obligations under the WHO framework to reduce tobacco consumption and not offer incentives to tobacco business, the Southeast Asia Tobacco Control Alliance said.

In a widely cited New York Times op-ed, Michael Bloomberg, the mayor of New York City, wrote: “Last year I endorsed President Obama for re-election largely because of his commitment to putting science and public health before politics.

“But now the Obama administration appears to be on the verge of bowing to pressure from a powerful special-interest group, the tobacco industry, in a move that would be a colossal public health mistake and potentially contribute to the deaths of tens of millions of people around the world.

“Although the president’s signature domestic issue has been healthcare reform, his legacy on public health will be severely tarnished — at a terrible cost to the poor in the developing world — unless his administration reverses course on this issue.”