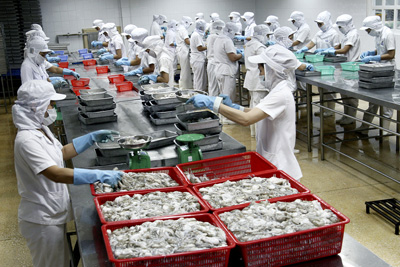 Việt Nam is ready to work with the Republic of Korea (RoK) to effectively implement the bilateral free trade agreement (FTA), boosting their trade to US$70 billion, perhaps even $100 billion, by 2020.

Prime Minister Nguyễn Xuân Phúc made the remarks while meeting with RoK Foreign Minister Yun Byung-se, who is on an official visit to Việt Nam, in Hà Nội yesterday.

The RoK is currently the top foreign investor, the second biggest ODA provider and the third trade partner of Việt Nam. Co-operation in diplomacy, security, defence, science-technology, agriculture, culture, and education along with locality-to-locality partnership has been increasingly intensified.

Repeating the outcome of the recent phone talks with Acting RoK President Hwang Kyo-Ahn, the PM said the two sides agreed to effectively carry out co-operation mechanisms, especially the Việt Nam – RoK FTA so as to bring economic and trade ties to new heights.

Việt Nam is striving to build a development-facilitating and action-oriented Government, reform administrative procedures, improve the business climate, and promote national competitiveness. It will create the best possible conditions for foreign enterprises, including RoK firms, to do business, he noted.

PM Phúc suggested RoK companies enhance investment in Việt Nam, particularly in infrastructure, renewable energy, and high technology. They were also recommended to import more goods that Việt Nam has advantages with, such as agricultural and aquacultural products, and assist the country in taking part in global supply chains.

At the meeting, the host leader underlined that the Vietnamese Government and people treasure the strategic partnership with the RoK and want to reinforce all-round co-operation for the sake of the two peoples and for regional and global peace and stability.

He also highlighted the need to increase exchanges in culture, education and, tourism and prepare for activities to mark the 25th founding anniversary of the diplomatic relationship later this year.

For his part, Foreign Minister Byung-se said with their efforts, the two countries are completely capable of boosting bilateral trade to $100 billion in the near future, thus turning Việt Nam into the third biggest trade partner of the RoK, after the US and China.

The two sides should step up high-ranking visits on the threshold of the 25th anniversary of diplomatic ties, he said, adding that he looks towards an official visit to the RoK by PM Phúc in 2017.

Aside from economy and trade, the RoK also wants to co-operate with Việt Nam in defence and security and to tighten connections in multilateral and global issues, the official said.

Minh asked the RoK to facilitate the entry of Vietnamese agro-forestry-fisheries into the RoK market and support the Southeast Asian nation to join the RoK’s global production and supply chains, while encouraging Korean businesses to increase investment in infrastructure development, renewable energy, support industry, food processing, agriculture and seafood.

He also proposed the RoK actively engage in the restructuring of State-run enterprises and the banking system in Việt Nam, maintain the provision of non-refundable aid packages and official development assistance (ODA) for Việt Nam, and soon reach the signing of the framework credit agreement in the 2016-20 period.

During the talks, the two sides agreed to enhance co-ordination in regional and international multilateral mechanisms of the US, the Asia-Pacific Economic Cooperation (APEC), the Association of Southeast Asian Nations (ASEAN), and the Mekong – RoK, to promote the settlement of differences, including East Sea disputes via peaceful means and international law and respect for diplomatic and legal procedures as well as navigation freedom, security and safety.

They also concurred to fully implement the Declaration on the Conduct of Parties in the East Sea (DOC) and soon complete the Code of Conduct in the East Sea (COC), contributing to the maintenance of peace, security, and development in the region and beyond.

Foreign Minister Byung-se affirmed that the ministry will continue co-ordinating with Việt Nam to step up the implementation of high-level agreements in the most practical and effective manner, to lift the bilateral strategic cooperative partnership to new heights and in celebration of the 25th anniversary of their diplomatic ties.