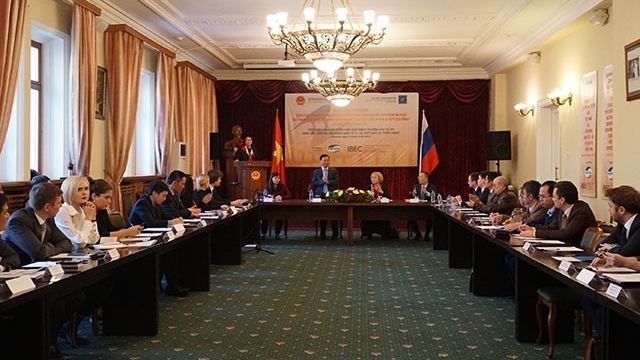 NDO – The economic and trade cooperation between Vietnam and the EAEU has achieved important results after two years since the signing of the Free Trade Agreement between Vietnam and the Eurasian Economic Union (Vietnam-EAEU FTA), contributing to creating a motivation for the economic development of each country and expanding cooperation in the region.

The remarks were made at a seminar on the two-year results and prospects of the Vietnam-EAEU FTA, which was held by the Vietnamese Embassy in Russia and the Russian Academy of Science on October 19.

Vietnamese Ambassador to Russia, Ngo DucManh, noted that the agreement marked a milestone in Vietnam’s international integration, while emphasising that the agreement will help to fuel the economy of each nation and cooperation between the two sides.

Assoc. Prof. A.Pylin, from the Russian Academy of Science, said that “the implementation of the FTA between the EAEU and Vietnam has brought about positive results and created changes in the trade balance between the FTA members, including the economic bilateral relations between Vietnam and Kazakhstan, Russia and Belarus.

The delegates also pointed out a number of difficulties in the bilateral trade cooperation including the currency of payment, high transport costs and the lack of preferential policies for small and medium-sized enterprises, among others.