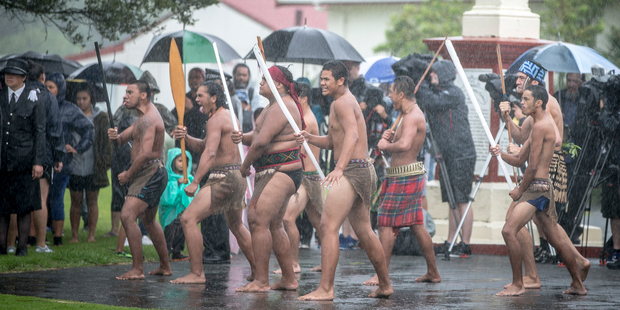 Watch the video of the protest here

The voice of protest made its way along the Bay of Islands to its traditional home on the shores of Waitangi, to Te Tii Marae. At the centre of the protest was the TPP agreement.

The voice of protest bustling down the road to Waitangi and it’s not just the adults.

Heeni Hoterene says, "They know that although the hīkoi group stands strong, not to be afraid of that because it is a dignified stance."

Peni Torea says, "This is about their future and what we do today is what we set a precedent for them and they need to know who they are and where they’re from."

The rain and John Key’s absence took the heat out of today’s protest, but tensions at Waitangi are known to ignite without warning. So should children be so close to the fire?

Hoterene says, "As an adult, your child’s safety comes first. You can easily move to the side if things heat up. I always remind my kids that their ancestors died in the battle of Ruapekapeka and so they need to stand their ground."

Children have often participated in protests across the years, including Whina Cooper and her mokopuna in the iconic land march.

"For us it’s about teaching their tikanga, their kawa, ko wai au who am I?" says Torea.

"I want my kids to know they have the right to control their own destiny, just as their ancestors who signed the Treaty believed," says Hoterene.

It’s a belief they won’t walk away from.