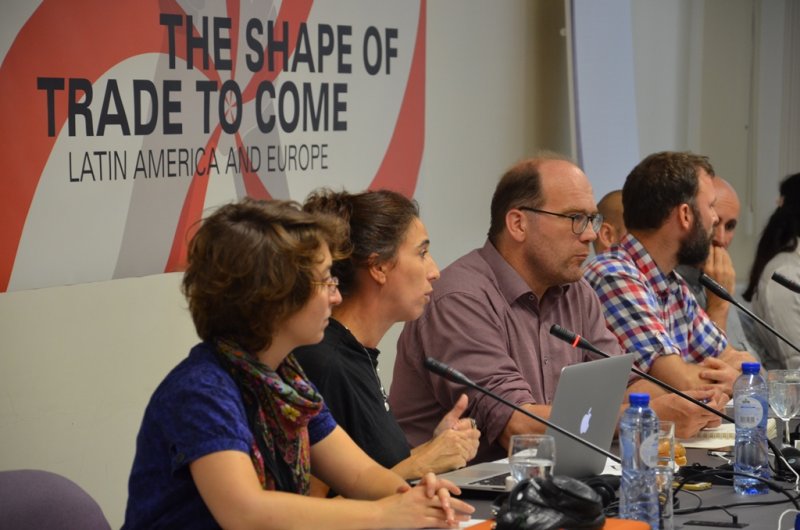 What to do about the EU’s new trade agenda in Latin America?

About ten years ago, the European Union (EU) introduced Global Europe, its most ambitious trade policy strategy to date. It was intended to open up new markets worldwide through new bilateral trade and investment agreements. After all, many countries in the South had until then successfully resisted participating in what the EU envisaged to be the new "trade policy of the 21st century". This was not least because it went way beyond simply dismantling customs duties but specifically focused on issues public procurement, services, new technologies, investment and much more besides. Bilateral negotiations were begun not only with countries in the South, but also with Canada, Japan and the USA. The aim was to increase pressure on the South and break down resistance. The world’s strongest economic regions would agree on common trade policy frameworks and thus create precedents.

However, these treaties (including TTIP and CETA) met with strong opposition. In addition, there were political upheavals in the United States with the election of Donald Trump and in Latin America with the election of Mauricio Macri in Argentina and the removal of Dilma Rousseff from office in Brazil. All this has led to a reorientation of the EU’s trade agenda, which now sees the political upheavals in Latin America as an opportunity to push through its ideas by pushing ahead with new agreements.

In view of the danger of a plethora of neo-liberal trade agreements being struck between the EU and Latin America, the Transnational Institute (TNI), the Seattle to Brussels Network (S2B) and the Rosa-Luxemburg-Stiftung Brussels organised the forum The Shape of Trade to Come – Latin America and Europe in the summer of 2017. Some 50 activists and trade experts from civil society, politics and trade unions discussed the development of trade relations between the EU and Latin America and developed strategies for how the free trade agenda can be watered down and managed to promote a fair trade policy.

At the conference, Cecilia Olivet of the Transnational Institute explained that there are currently 263 bilateral investment agreements between Latin American countries and the EU, of which about 70 percent were signed between 1985 and 2000. This number is now declining, but there is currently a trend towards free trade agreements with investment protection clauses. According to Olivet, this has to do with the fact that the economic models in Latin America continue to be strongly oriented towards export-oriented growth while at the same time focusing on direct investment and its growth effects. Some Latin American countries use or have used these elements for a redistribution policy, but the productive base has rarely been addressed. However, things like broad access to education, which progressive governments in Latin America have made possible, could also have the potential to transform a society’s productive base.

Alberto Villareal from Uruguay (Friends of the Earth Uruguay/REDES) also emphasised the return of a growing tendency in parts of Latin America towards investor-friendly policies as a driver of development, combined with the problem of permanently increasing government debt ratios. According to Villareal, in the long term, this development will mean that Latin America is integrated more deeply into global value chains, whereby Latin America should continue to play the role of a cheap supplier of raw materials and labour. Trade expert Alberto Arroyo from Mexico pointed out that the necessary differentiation between three Latin American blocs (ALBA/Mercosur/Pacific Alliance) and their economic models should not be overlooked. On the one hand, there are the countries with a clear neoliberal agenda, such as Colombia, while on the other there are the states that comprise the Bolivarian Alliance for America (ALBA). Added to that, there are the countries of the Mercosur bloc, including Brazil and Argentina, where the dominant economic model has not been addressed in recent years, but where important measures have been implemented at political level to achieve greater social equity. However, this progress is currently being reversed as a result of the neo-liberal turnabout of 2016. This means that Latin America is also once again showing a trend towards greater polarisation of political and economic models. According to Alberto Arroyo, the most pressing question is how to create more leeway for restructuring the economy. Tica Moreno, a Brazilian activist with the feminist movement World March of Women added that it is important not to lose sight of the central fight against capitalism in the battle against neo-liberal trade policies.

However, according to Jocelio Drummond of the PSI, the umbrella organisation for service unions, criticism of free trade and investment agreements in Brazil is still far from reaching the general public. This is partly due to the fact that other (domestic) issues are currently dominating the political debate in Brazil, and partly because the country’s political parties on both left and right have positioned themselves as supporters of the free trade model. This is down to the fact that in Brazil, the narrative of the interplay between exports, trade, investment and development is shared right across the political spectrum. As underlined by Luciana Ghiotto of the Argentine alliance Argentina Mejor sin TLC, this goes hand-in-hand with the rapprochement of the Mercosur bloc to the Pacific Alliance towards creating an agenda of liberalisation within Latin America. This would see Latin America’s leading economies in particular working towards a copy of the Asian competition model, to the detriment of the working classes. According to Ghiotto, a bottom-up approach, such as that pursued by Venezuela and others, combined with alternative regionalism, is currently being diluted still further.

Patricio López of the Chilean alliance Chile mejor sin TLC referred to the Chilean public’s widespread indifference to any discussion of trade policy. Nevertheless, the neo-liberal hegemony in Chile is no longer as closed as it was in the past. The pension system in Chile is an important factor as it offers the potential to bring about shifts in the debate, as has been shown in the context of the resistance to the Trans-Pacific Trade Agreement (TPP).

In Latin America, the whole of the right is firmly behind the ideology of free trade, and the extreme right’s dividing line with regard to criticism of globalisation does not play a role in the movements there. It is different in Europe, where some factions of the extreme right are adopting critical views towards free trade that were traditionally the preserve of the left. Therefore, the joint fight with Latin American actors against North-South trade agreements may also be a strength when it comes to setting oneself apart from right-wing criticism of free trade in Europe. Despite the intraregional differences that emerged during the conference, there are also areas of common ground for trade policy activists to develop joint strategies in Latin America and Europe. For example, these may run alongside transnational corporations, whose growing power in both regions is a threat to workers, the environment, democracy and human rights. Initiated under Ecuador’s presidency, the UN process to establish binding human rights standards for transnational corporations (in the so-called UN Treaty, which represents a step towards limiting economic and trade policies that first and foremost pursue the interests of large companies and their unrestrained enrichment). It is far more difficult to drive forward alternatives to free trade, capitalism and neo-liberalism. Here it is worth taking a look at the ALBA model in Latin America. Opponents are currently mobilising against the upcoming World Trade Organisation (WTO) Ministerial Conference in Buenos Aires. This is because the WTO and bilateral negotiations are currently being used tactically by free trade ideologues to push the neo-liberal reform agenda in the world trade regime like a game of ping-pong.