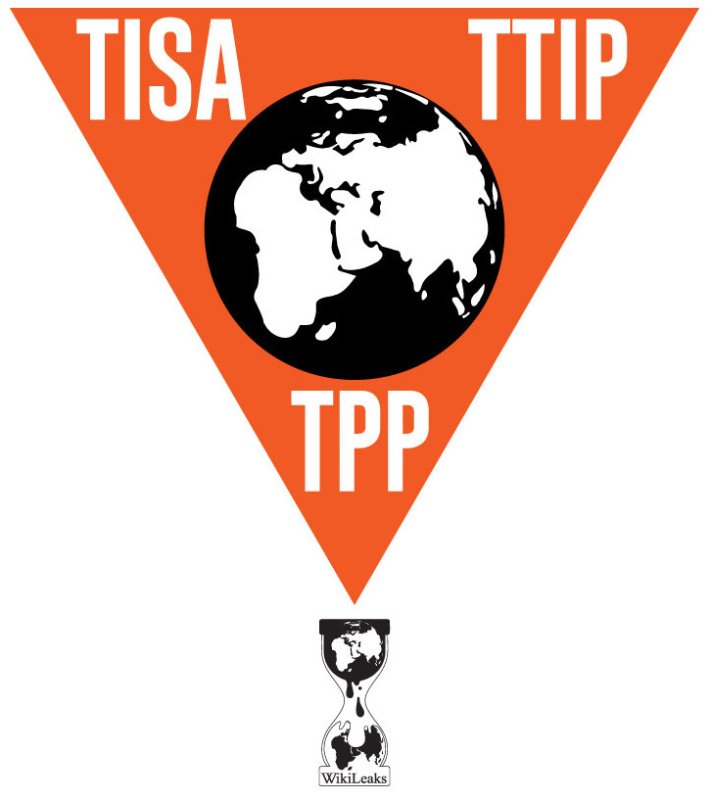 WikiLeaks releases today 17 secret documents from the ongoing TISA (Trade In Services Agreement) negotiations which cover the United States, the European Union and 23 other countries including Turkey, Mexico, Canada, Australia, Pakistan, Taiwan & Israel — which together comprise two-thirds of global GDP. "Services" now account for nearly 80 per cent of the US and EU economies and even in developing countries like Pakistan account for 53 per cent of the economy. While the proposed Trans-Pacific Partnership (TPP) has become well known in recent months in the United States, the TISA is the larger component of the strategic TPP-TISA-TTIP ’T-treaty trinity’. All parts of the trinity notably exclude the ’BRICS’ countries of Brazil, Russia, India, China and South Africa.

The release coincides with TISA meetings at the ministerial level at the OECD in Paris today (3–5 June). The ’T-treaty trinity’ of TPP-TISA-TTIP is also under consideration for collective ’Fast-Track’ authority in Congress this month.

The TISA release today follows the WikiLeaks publication of the secret draft financial services annex of the TISA negotiations on 19 June 2014 showing the aim to further deregulate the financial sector, despite widespread consensus that lack of oversight and regulation was the main cause of the last global financial crisis of 2008. Today’s release confirms the ongoing determination to deregulate. Furthermore, standstill clauses will tie the hands of future governments to implement changes in response to changing environment.

Today’s release is the largest on secret TISA documents and covers numerous previously undisclosed areas. It contains drafts and annexes on issues such as air traffic, maritime, professional services, e-commerce, delivery services, transparency, domestic regulation, as well as several document on the positions of negotiating parties. WikiLeaks has also published detailed expert analysis of the topics covered in today’s release.

Our World Is Not For Sale http://www.ourworldisnotforsale.org/

Australia: All submissions will be made publicly available on the DFAT website unless the author specifies otherwise. Submissions may be lodged electronically to: services.negotiations@dfat.gov.au website.

United States Request for comments submissions from September to October 2013.

Canada: Submissions may be sent by e-mail to: TMSconsultation@international.gc.ca Consultations on a Plurilateral Services Agreement