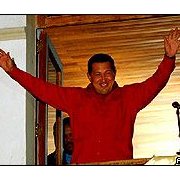 ALBA seen as a historical milestone in Caribbean-Latin America relations
21-Feb-2007 Radio Jamaica
Antiguan Prime Minister Baldwin Spencer, along with the Prime Ministers of Dominica and St. Vincent, on the weekend signed onto the Alba, a new free trade agreement from Venezuelan leader Hugo Chavez.
Congress okays Venezuelan-Nicaraguan cooperation agreement
25-Jan-2007 El Universal
Venezuela’s National Assembly approved Thursday a framework agreement on cooperation between Venezuela and Nicaragua with a view to the Bolivarian Alternative for the Americas (Alba).
ALBA: Justice in deeds
20-Jan-2007 Granma
The Bolivarian Alternative for the Americas (ALBA) welcomed Nicaragua as its fourth full member as the FSLN returned to power in that country, while in Ecuador, President Rafael Correa adds new support to the movement for Latin America integration.
ALBA: Venezuela’s answer to free trade
7-Dec-2006 Focus
The Bolivarian Alternative for the Americas (ALBA) represents the first attempt at regional integration that is not based primarily on trade liberalization but on a new vision of social welfare and equity. This report provides a detailed account, and a critical assessment, of the ALBA project to date.
Interview: Alternatives for Integration and Free trade Must Be Considered for the Continent
14-Nov-2006 Noticias do Planalto
It will be necessary to consider several alternative models for integration and trade between Latin American countries through several initiatives.
ASEAN’s new charter: Don’t look now
3-Nov-2006 Asia Times
It could be the most significant development for the Association of Southeast Asian Nations (ASEAN) since it was established in 1967. Yet few among the regional bloc’s 550 million people are even aware that they are about to have a charter for closer cooperation and economic integration.
Proposals to protect the constitution from neoliberalism
6-Oct-2006 Movimiento Boliviano por la Soberanía y la Integración solidaria de los pueblos: Contra el TLC y el ALCA
In the last 14 months, the Bolivarian Movement of Struggle against the FTA and FTAA and its successor, the Bolivarian Movement for the Sovereignty and Integration of People, have been preparing a proposal for a debate in the Constituent Assembly which was set up the 6th of August in Sucre. It is not a legal document but a platform of minimal principles to contribute to the debate.
Cuba, Venezuela use Mercosur to promote ALBA
26-Sep-2006
Rather than being a “blow” to the ALBA project, Venezuela’s entry into Mercosur is clearly aimed at defending and promoting this anti-capitalist project.
LatAm diplos talk FTA in Uruguay
20-Sep-2006 Prensa Latina
Ambasadors from three Latin American nations will present in Montevideo the foundations of the Bolivarian Alternative for the Americas (ALBA), in a specialized meeting to be held at the Republic’s state University.
0 | 20 | 40 | 60 | 80 | 100
Subscribe to bilaterals.org weekly