Costa Rican lawmakers debate FTA law
31-Oct-2007 Prensa Latina
The Board of the Costa Rican Legislative Assembly admitted that it is studying 943 of 1,097 motions against one of the implementation laws of the Free Trade Agreement with the United States which poses danger for Costa Rican farmers and biodiversity
Caribbean nations grapple with biofuel issues
28-Oct-2007 USA Today
In the United States, experts debate whether biofuel growth in the tropics will cut into profits for Midwest producers. Special free-trade agreements with those countries can make it less expensive to ship ethanol from there to the US coasts.
Costa Ricans to strike against FTA
27-Oct-2007 Prensa Latina
Trade unions from the Costa Rican Electricity Institute announced a strike against the complementary agenda of CAFTA, so that the company continues to govern in the fields of electricity and telecommunications.
Fear and voting in Costa Rica
26-Oct-2007 FPIF
Costa Rica’s recent referendum was supposed to decide once and for all whether that country should enter into the Central American Free Trade Agreement (CAFTA). Instead, the Oct. 7 vote polarized and politicized this small country of four and a half million people more than anything since neighboring Nicaragua’s war between the Sandinistas and the Contras two decades ago. And even though supporters of the treaty prevailed by a slim margin, CAFTA opponents still have a few cards to play and may yet block its implementation.
Free Trade undermining democracy in Costa Rica
25-Oct-2007 Alliance for Democracy
Democracy in Costa Rica was undermined after several violations to costarrican law.
Costa Rican court confirms approval of US free trade pact
23-Oct-2007 IHT
Costa Rica’s top electoral court confirmed the results of an Oct. 7 referendum on a free trade agreement with the United States, saying a recount showed the ’yes’ votes only slightly lower than preliminary results had indicated.
Guatemala union heads killed despite US trade deal
18-Oct-2007 Reuters
Masked gunmen dumped a Guatemalan banana picker’s bullet-ridden corpse yards from fields of fruit bound for the United States, a grim reminder of the risks of organizing labor in the Central American country.
Guatemala: FTA, neolib affect food supply
17-Oct-2007 Prensa Latina
Neoliberal policies and the free trade agreement with the US have made Guatemala rely on others to feed its population, a study published here denounces.
Costa Rica’s CAFTA “Si” vote called into question
13-Oct-2007 Upside Down World
While free trade proponents cheered, opponents called foul in Costa Rica’s 51.5 percent vote Oct. 7 in favor of ratifying the Dominican Republic-Central American Free Trade Agreement (DR-CAFTA).
Free-trade fight reflects broader battle
12-Oct-2007 Washington Post
The vote was barely 24 hours away when President Bush’s aides held an emergency conference call at 10:45 p.m. last Friday. House Speaker Nancy Pelosi and Senate Majority Leader Harry M. Reid had sent a letter that could sink a US-led free trade agreement up for referendum in Costa Rica. The Bush team decided to put out its own statement to save it. The trade pact went on to pass narrowly Sunday, but the last-minute drama capped a furious few weeks in which the White House and Congress fought a proxy war in the tiny Central American nation.
Protest US intervention and dirty campaign in Costa Rican CAFTA Referendum
12-Oct-2007 Upside Down World
Take action from October 15-20 to demand that the Costa Rica referendum results NOT be certified by the OAS
Costa Rica referendum on CAFTA outcome questioned
8-Oct-2007
US intervention, corruption, and an internationally financed fear campaign provoke questions about referendum process
Costa Ricans narrowly back free trade with US
8-Oct-2007
Costa Ricans narrowly approved — 52% said yes, 48% said no — a free trade deal with the United States in a referendum on Sunday that has split the Central American nation like no other issue in decades.
Costa Rica: ITUC supports "No" to DR-CAFTA in referendum
8-Oct-2007 Scoop
Despite the overwhelming evidence of workers’ rights being routinely abused, DR-CAFTA offers no solution.
Threats, dirty tricks, fake polls: Costa Rica votes under duress on ’free trade’
7-Oct-2007 HuffPost
It is politically inconceivable that the Democratic majority in Congress — which voted against CAFTA when it was approved here — would move to punish Costa Rica for its voters having rejected the same agreement. 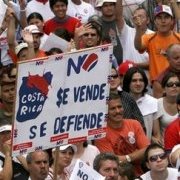 Quiet day in Costa Rican referendum
7-Oct-2007 Prensa Latina
Nearly 2.7 million people will vote today to decide whether CAFTA is to be ratified or not, an unprecedented happening in the political history of Costa Rica.
LatAm notables against CAFTA-DR
6-Oct-2007 Prensa Latina
Renowned Latin American figures have expressed their solidarity with the Costa Rican people, who are expected to go to the polls Sunday to decide in a referendum whether their country signs a free trade agreement with the US.
Poll predicts Costa Ricans will vote against free trade agreement with US, Central America
5-Oct-2007 AP
Costa Ricans are poised to reject the U.S.-Central American free trade agreement in a referendum Sunday, according to a poll published Thursday.
Opposition gains strength as pro-CAFTA forces caught in manipulation scheme
4-Oct-2007 IRC Americas Program
The remarkable coalition of public employees, farmers, small business owners, intellectuals, and assorted citizens has already changed Costa Rican politics regardless of the outcome of the referendum vote.
Costa Ricans oppose FTA
4-Oct-2007 Prensa Latina
Four days before a referendum in Costa Rica on CAFTA, a poll carried out by the company Demoscopia for the newspaper Al Dia shows that 50.8 percent of voters oppose the FTA.
0 | ... | 80 | 100 | 120 | 140 | 160 | 180 | 200 | 220 | 240 | ... | 460
Subscribe to bilaterals.org weekly