US says China has fallen short on ‘phase one’ intellectual property commitments
3-May-2021 South China Morning Post
The US criticised China for failing to fulfil commitments it made in the “phase one” trade deal a year ago to improve protections for the intellectual property of American companies.
Japan approves world’s biggest free-trade deal after China’s call to boost Asian economy
29-Apr-2021 South China Morning Post
Japan’s parliament approved joining the RCEP to aim for it to come into effect from the start of next year. The approval by Japan’s upper house comes after China called for the deal to be ratified to shore up the economy in the Asia-Pacific.
Qingdao initiative launched to promote early implementation of RCEP deal
26-Apr-2021 Hellenic Shipping News
A joint initiative on promoting early implementation of the Regional Comprehensive Economic Partnership (RCEP) agreement has been launched in the east China port city of Qingdao on April 25.
RCEP faces challenges as comprehensive China-US competition takes shape: experts at Boao forum
20-Apr-2021 Global Times
Professor at the East Asian Institute of the National University of Singapore, cautioned that geopolitics now have "too much influence" on world trade, which could pose "great challenges" to the further implementation of the trade deal.
Europe’s China gambit
10-Apr-2021 Project Syndicate
Trade and investment agreements cannot transform China into a Western-style market economy or turn it into a democracy.
Belarus, China in talks over agreement on investments, trade in services
9-Apr-2021 BELTA
The first round of negotiations over the agreement on investments and trade in services between Belarus and China was held online on 7 April.
Fate of trade pact hangs in the balance amid Beijing-Taipei tensions
6-Apr-2021 South China Morning Post
A 10-year deadline for the ECFA to become a full free-trade deal has passed and neither side has taken action
“Comprehensive Strategic Partnership” Agreement and the future of Sino-Iranian relations
5-Apr-2021 Modern Diplomacy
As a result, although Sino-Iranian relations have developed over the past 10 years in terms of economic, energy, and security relations, and the two countries have similar views on the international system, the security interests of the two countries, especially China, outweigh its economic interests with Iran.
EU-China trade deal is a Trojan Horse sellout
30-Mar-2021 Australian Financial Review
The short-sighted German-driven agreement betrays the European project and poses a major economic and political problem for the rest of the West.
China, Oman agree to enhance cooperation, push forward China-GCC free trade talks
30-Mar-2021 CCTV English
Visiting Chinese State Councilor and Foreign Minister on Monday held a meeting with his Omani counterpart, during which both sides agreed to enhance bilateral cooperation and push forward the free trade zone talks. 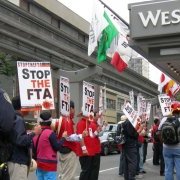 FTA labour rights provisions useless without trade union action, says Korean unionist
29-Mar-2021 bilaterals.org
Interview with Ryu Mikyung who is the International Director at the Korean Confederation of Trade Unions.
The complexities of China’s CPTPP entry
26-Mar-2021 East Asia Forum
There are several sticking points for new entrants into the CPTPP, especially China.
China says members of RCEP pact aim for deal to take effect from 2022
25-Mar-2021 Reuters
China is encouraging the early implementation of the Regional Comprehensive Economic Partnership, and members of the Asia-Pacific trade pact aim for it to take effect from Jan. 1, 2022.
China eyes free trade agreement with the Gulf states
25-Mar-2021 Arab News
China wants to reach a free trade agreement with the GCC states, Chinese Foreign Minister Wang Yi said on the sidelines of his visit to Riyadh.
Botswana’s relations with China continue to deepen
24-Mar-2021 China Daily
Diplomatic relations between China and Botswana have grown significantly this year, with the African nation becoming the 46th country on the continent to sign a memorandum of understanding on the China-proposed Belt and Road Initiative.
US and Canada follow EU and UK in sanctioning Chinese officials over Xinjiang
23-Mar-2021 The Guardian
The EU is due shortly to sign a major investment deal with China, but Germany in particular will be concerned that the sanctions may destabilise economic relations with China.
China on course to fulfill all RCEP obligations
22-Mar-2021 The Star
China will be able to fully fulfill its obligations under the agreement of the Regional Comprehensive Economic Partnership when it enters into force, a commerce official said.
Pakistan promotes Belt and Road port for Central Asian trade
18-Mar-2021 Nikkei Asia
Pakistan is offering access to Gwadar port, a strategic component in China’s Belt and Road Initiative (BRI), to landlocked Central Asian countries in the hope of stimulating activity at the idle facility.
Critics raise alarm over EU-China deal
16-Mar-2021 VOA
An investment deal between China and the European Union restricts Europeans from investing in Chinese media and entertainment companies but does not block Chinese firms from investing in European ones.
China-EU comprehensive agreement on investment: Ineffective in protecting labour rights and acting on environmental justice
15-Mar-2021 Globalization Monitor
Without thinking about environmental action beyond emissions and enacting binding agreements on protecting workers’ rights, China and the EU fail at making meaningful change for both labour and environmental justice.
0 | ... | 60 | 80 | 100 | 120 | 140 | 160 | 180 | 200 | 220 | ... | 2700
Subscribe to bilaterals.org weekly