FTAA off? - Regional heads explore option to US-proposed Free Trade Area
10-Feb-2006 Jamaica Gleaner
Caribbean leaders are reconsidering the region’s strategic alliances, including a possible free trade agreement with Venezuela as an alternative to the stalled Free Trade Area of the Americas (FTAA) negotiations.
New Bolivia leader vows to nationalize natural gas but says he’s open to free-trade zone
23-Jan-2006 Money Sense
Bolivian President Evo Morales used his inaugural address Sunday to renew his pledge to nationalize the country’s vast natural gas reserves, but said he’s open to the idea of a large US-sponsored trade zone he harshly criticized last year during his campaign.
Peru endorsed Miami as site of free trade pact secretariat
21-Jan-2006 Miami Herald
President Alejandro Toledo endorsed Miami as the headquarters for a proposed free trade secretariat as Florida Gov. Jeb Bush completed a two-day trade visit to Ecuador and Peru.
Venezuela gains Mercosur entry, deepening relations
12-Dec-2005 Bloomberg
Venezuela today gained entry into the South American trade group Mercosur, a move pursued by President Hugo Chavez to help strengthen regional agreements and thwart a US-sponsored accord for the hemisphere.
Timely demise for Free Trade Area of the Americas
6-Dec-2005 La Prensa San Diego
When the Bush cabinet announced intentions to revive the moribund Free Trade Area of the Americas at the Fourth Summit of the Americas in Mar del Plata, the countries of the Southern Common Market closed ranks to prevent it. What followed was a diplomatic melee that reflects not so much divisions within Latin America, as a growing resistance to the current free trade model throughout the developing world.
Is an ’FTAA Lite’ a real possibility?
10-Nov-2005 IPS
Most of the countries in Latin America and the Caribbean want a Free Trade Area of the Americas (FTAA), even in a less ambitious form, as opposed to a handful of nations - albeit an economically powerful minority - that reject the idea. 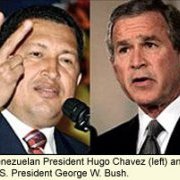 Despite FTAA defeat at Americas Summit, free trade to be imposed on Colombians
8-Nov-2005 Colombia Journal
In the aftermath of the U.S. failure in Argentina, the Bush administration continues to work for bilateral or sub-regional free trade agreements throughout the Americas.
No pax americana
8-Nov-2005 Khaleej Times
Indigenous movements are indeed a threat to the free-trade policies Bush is hawking, with ever fewer buyers, across Latin America. Their power comes not from terror but a terror-resistant strain of hope, so sturdy it can take root in the midst of Colombia’s seemingly hopeless civil war.
Trade accord stalled as Americas meeting ends
6-Nov-2005 New York Times
A two-day summit meeting of leaders of 34 Western Hemisphere nations attended by President Bush was drawing to a close here on Saturday without a clear agreement on when and how to resume stalled talks aimed at achieving a hemispherewide free trade agreement.
Leaders fail to agree on free trade talks
6-Nov-2005 AP
Leaders debating whether to revitalize talks on a free trade zone spanning the Americas ended their two-day meeting Saturday without an agreement.
Anti-US protests flare at summit
5-Nov-2005
Anti-American demonstrators torched storefronts and battled police Friday in this Atlantic resort following a large, peaceful protest, spearheaded by Venezuelan President Hugo Chavez, over President Bush’s plans to revive a free trade accord at a regional summit. 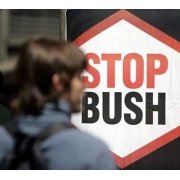 Anti-Bush rally closes Peoples Summit
3-Nov-2005 Prensa Latina
The 3rd Peoples’ Summit is closing Thursday its three marathonic days of searching for an alternative model to neoliberalism with a hemispheric demonstration repudiating US President George W Bush.
Clash of visions for Latin America
3-Nov-2005 Christian Science Monitor
It’s Bush vs. Chavez as 33 heads of state meet Friday for Summit of the Americas.
Does the FTAA have a future?
3-Nov-2005
The Free Trade Area of the Americas (FTAA) will become a reality only if the United States allows increased market access for Brazilian agriculture and competitive manufactures and if Brazil reciprocates by opening its market to foreign competition in goods and services.
Bush says Latam free-trade idea stalled for now
2-Nov-2005 Washington Post
"The FTAA has stalled, I agree," Bush said on Tuesday. "On the other hand, at this point in time, the Doha round really trumps the FTAA as a priority, because the Doha round not only involves our neighborhood, it involves the whole world."
The FTAA and its babies
2-Nov-2005 CKUT
From November 4-5th, 2005, the heads of state of 34 countries in the Americas will meet in Mar del Plata, Argentina, to push the Free Trade Area of the Americas (FTAA) forward. One big issue at the helm this year are the bilaterals - otherwise known as the FTAA’s babies - which establish free trade agreements on smaller scales.
Business groups lobby to resurrect FTAA
2-Nov-2005 IPS
Dozens of business groups from throughout the Americas are urging regional governments to adopt economic and trade reforms to give a boost to upcoming World Trade Organisation talks and a stalled regional free trade agreement.
FTAA talks divide Latin American countries
1-Nov-2005 Xinhua
The talks on a future Free Trade Area of the Americas (FTAA) have divided Latin American states into different interest groups prior to the 4th Summit of the Americas to be held in Argentina on Nov. 4-5.
Chavez: Bush beats dead horse with FTAA
1-Nov-2005 Prensa Latina
Venezuela’s President Hugo Chavez has accused his US counterpart George W Bush of trying to restore the Free Trade Area of the Americas (FTAA), which is a dead project, he asserted.
Groups to rally against Bush in Argentina
30-Oct-2005 AP
"We think his policies are totally contrary to what we want for Latin America and are promoting genocide, domination of workers and their communities and the plundering of natural resources," said Argentine labor leader Juan Gonzalez, who is heading a protest "People’s Summit" coinciding with Bush’s visit Thursday through Saturday.
0 | 20 | 40 | 60 | 80
Subscribe to bilaterals.org weekly