Despite FTAA Defeat at Americas Summit, Free Trade to Be Imposed on Colombians

When it became clear that the closing declaration of the recent Summit of the Americas would not endorse the U.S.-pushed Free Trade Area of the Americas (FTAA), President George W. Bush boarded Air Force One and departed Argentina before the summit had concluded. In the aftermath of the U.S. failure in Argentina, the Bush administration continues to work for bilateral or sub-regional free trade agreements throughout the Americas. On November 14, negotiators from the United States, Colombia, Ecuador and Peru will meet in an attempt to finalize a U.S.-Andean region free trade agreement. 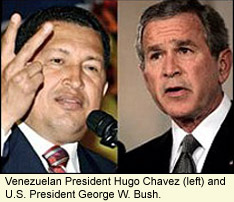 Following the Summit of the Americas, Bush administration officials pointed out that 29 of the 34 nations participating supported the FTAA. Only Brazil, Argentina, Venezuela, Uruguay and Paraguay opposed the hemispheric agreement. These five countries, however, represent more than half of Latin America’s economic activity. The five dissenting nations inserted a clause into the summit’s closing declaration claiming that a regional free trade agreement would harm certain nations because the “conditions do not exist to attain a hemispheric free-trade accord that is balanced and fair with access to markets [and] free of subsidies and distorted commercial practices.”

While 29 of the leaders at the summit supported the FTAA, the majority of the population in many of these nations does not. In other words, these leaders do not reflect the public will expressed by their citizens. Colombia’s President Alvaro Uribe, for example, is an FTAA advocate and is currently engaged in negotiating the U.S.-Andean region free trade pact. An October poll, however, revealed that 43 percent of Colombians are opposed to the signing of a free trade agreement with the United States, while only 38 percent supported it. Despite a lack of popular support, Uribe intends to impose a free trade agreement on the Colombian people that will mostly benefit the U.S. economy, multinational corporations and certain sectors of Colombia’s economic elite.

Also troubling is the pattern of repression utilized by the Uribe government against Colombians critical of the president’s economic policies. In the past month, the government has arrested two community leaders who have organized in opposition to the free trade agreement. José Vicente Otero Chate, a Nasa indigenous leader in the department of Cauca, was detained on October 6 and accused of terrorism. Otero Chate had organized a popular consultation in Cauca in which the majority of the participants opposed a U.S.-Andean region free trade pact.

On October 17, another critic of free trade, Miguel Alberto Fernández Orozco, regional president of Colombia’s largest union, United Workers’ Central (CUT), and leader of a peasant organization in Cauca, received death threats signed by the right-wing paramilitary group United Self-Defense Forces of Colombia (AUC). The pamphlet containing the death threat also claimed that Fernández Orozco’s organization and other peasant groups “are led by terrorists and leftist thugs.” On November 1, only days before Uribe would meet with Bush in Argentina to re-affirm his support for a free trade agreement, Fernández Orozco was arrested and imprisoned in Cauca.

Following Bush’s departure from the Summit of the Americas, Venezuela’s President Hugo Chávez proclaimed victory, stating: “The great loser today was George W. Bush. The man went away wounded. You could see defeat on his face.” Clearly, regional opposition to the FTAA has thwarted Washington’s attempts to implement a hemisphere-wide agreement. Sadly, however, the Bush and Uribe administrations remain intent on imposing free trade on Colombians clearly opposed to any agreement.