Groups to rally against Bush in Argentina
30-Oct-2005 AP
"We think his policies are totally contrary to what we want for Latin America and are promoting genocide, domination of workers and their communities and the plundering of natural resources," said Argentine labor leader Juan Gonzalez, who is heading a protest "People’s Summit" coinciding with Bush’s visit Thursday through Saturday.
It’s US or us for Andean Pact partners says Venezuelan Trade Minister
30-Oct-2005 Daily Journal
An apparently chance remark by a junior trade minister appears to have put Venezuela’s Foreign Minister Alí Rodríguez Araque on something of a spot.
Venezuela to revise undertakings with countries signatories of FTA
27-Oct-2005 El Universal
Minister of Integration and Foreign Trade Gustavo Márquez declared Tuesday that in the event that the parties to the Andean Community decide to sign a Free Trade Agreement (FTA) with the United States, Venezuela will have to revise trade arrangements with those nations.
An eye for an eye? Disregarding fairness, disconnecting from the FTAA
18-Oct-2005 COHA
Latin American countries have rightly learned to be apprehensive over the domination of the United States, and it is this reluctance that is behind their slowdown over the FTAA.
The FTAA: A recipe for economic disaster?
16-Aug-2005 Political Affairs Magazine
As indicated by CAFTA’s ratification, instead of pushing for the enactment of the FTAA, the Bush administration has re-evaluated its strategy, now attempting to build up momentum by establishing separate free trade agreements with the different regions in the hemisphere through a "divide-and-conquer" strategy.
Free trade showdown: How long can Panama hold out for an agreement that reflects its own national interests?
10-Aug-2005 COHA
DR-CAFTA’s narrow victory will incite US domestic producers’ lobbies to exert heavier pressure to get a US-Panama agreement more favorable to US industry. 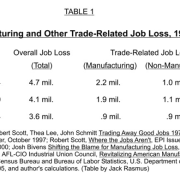 CAFTA and the legacy of free trade
12-Jul-2005 Znet
Passage of CAFTA is not guaranteed because of splits within the US corporate elite over the proper pace and focus of free trade.
Trade pacts to the south losing appeal
30-Jun-2005 New York Times
An ambitious American plan for a hemispherewide trade pact, which President Bush described as a "vital link for prosperity," is mired in disputes that have led to widespread skepticism about its chances of ever materializing.
Bilateral Treaties to Promote and Protect Foreign Investment within the Americas: an alternative to the FTAA
29-Jun-2005 Argenpress
Sovereign states are the original right bearers. They have to denounce bilateral investment treaties or their most arbitrary clauses following the procedures provided, in accordance with the legal principles of democratic constitutions; to recover their legislative and jurisdictional powers, by retrieving their inherent jurisdiction which had been delegated to international foreign tribunals, allowing them to rule on the general regulatory or contractual policies of independent nations.
New US trade czar faces tests at home and abroad
11-May-2005 IPS
US Trade Representative Rob Portman, now in his second week on the job, faces numerous challenges as he seeks to build support at home and abroad for an ambitious US trade agenda, observers say.
Fidel’s Presence at the Inauguration of the Fourth Summit of the Battle Against the FTAAs
28-Apr-2005 Granma, Cuba
The Fourth Summit on the Battle against the FTAAs was launched in the presence of the Commander-in-Chief Fidel Castro in Palacio de las Convenciones.
The Fourth Hemispheric Summit against the FTAA launches today.
27-Apr-2005 Granma
The current situation of the FTAAs negotiating process and the campaign of the people’s struggle against this annexation plan devised by the US Government will be analysed from today in the Fourth Hemispheric Summit of the Battle Against FTAAs.
Rice calls on Brazil to ’reenergize’ free trade talks
27-Apr-2005 Bloomberg
US Secretary of State Condoleezza Rice called on Brazil to "reenergize" talks with the US on the proposed Free Trade Agreement of the Americas.
Brazil says no to US plan for hemispheric free trade
21-Apr-2005 Canadian Press
Clinching a deal for a 34-country free-trade zone that would stretch from Alaska to Argentina is "off the agenda" for Brazil, President Luiz Inacio Lula da Silva said Wednesday.
FTAA: Missed deadline prompts efforts to restart stalled hemispheric trade negotiations
20-Apr-2005 GAO
The US Government Accounting Office was asked to analyze (1) progress made in FTAA negotiations since GAO’s last (April 2003) report (2) factors that have been influencing the FTAA’s progress; and (3) future prospects for the FTAA.
FTAA dead but not quite buried, say activists
12-Apr-2005 IPS
Activists and academics are singing the requiem for the Free Trade Area of the Americas (FTAA), a US-driven initiative that they say will soon be buried. However, the governments that have participated in the talks are not yet talking about failure.
What’s happening with the FTAA negotiations?
19-Mar-2005 HardBeatNews
By becoming an associate member of Mercosur, Cuba, at least indirectly, may have some influence in how the FTAA is finally formulated.
Call for a citizen’s popular consultation Concerning the Free Trade Agreement
23-Feb-2005 En Camino
The experience of the countries that have been put under the neoliberal policies and the FTA, the results of the economic opening imposed by the Government of President Gaviria, the process of negotiation between Colombia, Ecuador, Peru and the USA, puts in evidence that the right to democratic and popular consultation and resistance is justified.
ALBA: Bolivarian Alternative for Latin America and the Caribbean
3-Feb-2005 venezuelanalysis.com
This document is a summary of information on the ALBA published by the Banco the Comercio Exterior (Bancoex)
CARICOM considers FTA with US, Canada
22-Jan-2005 Nassau Guardian
As the outlook for the Free Trade Area of the Americas continues to be shrouded in uncertainty, CARICOM is looking to bilateral Free Trade Agreements as a means of improving market access for countries in the region.
0 | 20 | 40 | 60 | 80
Subscribe to bilaterals.org weekly