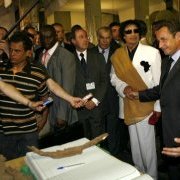 The Mediterranean Union: Dividing the Middle East and North Africa
13-Feb-2008 Global Research
The Middle East and North Africa are in the process of being divided into spheres of influence between the European Union and the United States. Essentially the division of the Middle East and North Africa are between Franco-German and Anglo-American interests. There is a unified stance within NATO in regards to this re-division.
Interview: US to push free trade in Middle East
31-Jan-2008 Al Bawaba
Carlos M. Gutierrez, the influential and persuasive US Secretary of Commerce plans to use a keynote business conference in Jordan to press home the ambition of the Bush administration to see the establishment of a regional US-Middle East Free Trade Area by the deadline of 2013.
Vying for position
28-Dec-2007 Al-Ahram
The European Union and the United States are increasingly involved in a widening medley of trade and other agreements in the Middle East and North Africa region. As the EU and US push for more and varied free trade agreements, rivalries between these global economic giants also spur competition among Arab countries.
Joining the fold
20-Dec-2007 Al-Ahram
The US since 2000 espoused even closer links between its strategic interests and trade liberalisation. Europe is not far behind.
Israeli industrialists’ strategy in the global supply chain
27-Apr-2007
The aim of this paper is to try to understand the Israeli industrialists’ strategy in the globalization process in the course of the recent years. The new strategy was implemented in the days of the first Intifada (the Palestinian uprising) in the late 80s. At that time voices were heard in the Association of Israeli Industrialists, the strongest organization of Israeli employers, advocating an agreement with the Palestinians which would not oppose the establishment of an independent Palestinian State, as long as the Palestinian economic dependence on Israel is preserved.
Fakhro, Monroe to lead Kingdom at MEFTA meet
26-Mar-2007
The US Ambassador William T Monroe and the Minister of Industry and Commerce Dr Hassan Abdulla Fakhro will lead the Bahraini team at the Middle East Free Trade Area (MEFTA) Trade and Investment Conference in London on March 29.
Reviving the Maghreb Union through economy before politics
22-Mar-2007
Foreign ministers of the Arab Maghreb Union (AMU) announced at the conclusion of their 26th round in Rabat that they would establish a Maghreb investment and trade bank owned by the central banks of the five AMU member states (Morocco, Tunisia, Algeria, Libya and Mauritania) with an initial capital of $1 billion, i.e. sevenfold the total assets of their commercial banks.
US trade, investment deals in Middle East advance bolder goals
18-Dec-2006 Washington File
Trade and Investment Framework Agreements (TIFAs) the United States signs with countries in the Middle East and North Africa help realize the vision of a regional free trade area integrated with global economy, US officials say.
A US-Middle East trade agreement: A circle of opportunity?
6-Dec-2006 Peterson Institute
In 2003 President George W Bush proposed a US-Middle East free trade agreement (FTA) to bring “an expanding circle of opportunity” to the region. This new book from the Peterson Institute examines whether an FTA can achieve this goal and the trajectory for a likely agreement.
US free traders retreat on UAE ports deal
19-Feb-2006 IPS
In a replay of congressional efforts last year that foiled a bid by a Chinese company to buy a US oil firm, a group of hawkish US lawmakers, citing national security concerns, are trying to block a deal that gives a major Arab company control over a British firm that runs some US ports.
Free trade agreements: The quiet economic track of US Middle East policy
13-Feb-2006 Washington Institute
Since the invasion of Iraq in 2003, the Bush administration has placed democratization and reform in the Middle East at the top of its agenda. While press reports have focused on political developments, another key component to the American strategy entails encouraging economic growth, modernization, and liberalization throughout the region.
No US-ME free trade talks this year but with Egypt
12-Feb-2006 MENAFN
According to US Trade Representative for Europe and the Middle East Shaun Donnelly, the only Arab country under consideration for beginning FTA talks before the summer of 2007 is Egypt.
Oman pact boosts US agenda in the Middle East
21-Jan-2006 IPS
The Bush administration is pushing a spate of free trade agreements with its allies in the Middle East that mostly lack input from marginalised local communities or civil society groups.
US ’Big Brother’ attitude in FTAs draws criticism
17-Nov-2005
Arabs attending a conference in Bahrain blasted yesterday Washington’s "Big Brother" attitude in bilateral Free Trade Agreements, saying they are political tools to serve US interests rather than enhance economic prosperity in the region.
Bush notifies Congress of intent to sign FTA with Oman
18-Oct-2005 White House
"Entering into an FTA with Oman will build on the FTAs that we already have with Israel, Jordan, and Morocco, as well as the FTA that we have concluded with Bahrain, and will be an important step on the path to fulfilling my vision of developing economic growth and democracy in the Middle East and creating a US Middle East Free Trade Area (MEFTA) by 2013."
Bahrain societies flay move to normalise ties with Israel
30-Sep-2005 Gulf News
Nineteen societies and non-governmental organisations (NGOs) have rapped moves to normalise relations with Israel and called for joint national and regional efforts to abort the US-initiated Broader Middle East project.
US Middle East economic policy: Are trade-based initiatives an effective tool in the war on terrorism?
19-Aug-2005 Center for Contemporary Conflict
An assessment published by a US military research outfit.
0 | 20
Subscribe to bilaterals.org weekly