Competition with China: if you can’t beat it, join it
2-Nov-2007 IPS
China has beaten Mexico hands down in terms of trade in the past few years, and may do even better after December, when a "peace clause" expires.
Mexico stands up to FTA
31-Oct-2007 Prensa Latina
About 40 Mexican rural organizations agreed Wednesday to create a unitary front against the North America Free Trade Agreement. As part of the peaceful resistance plan, farmers will camp on the central square of Zocalo starting Monday to defend the rights of four million Mexican agricultural producers.
Israel, Mexico amended the Israel-Mexico Free-Trade Agreement of 2000
30-Oct-2007 Port 2 Port
The amendment allows for goods originating in Israel or Mexico to undergo minimal processing or storage in a third country, such as the US or EU, and still retain duty-free status
Bolivia: Chancellor Choquehuanca travels to Mexico to sign bilateral agreements
24-Oct-2007 Red Bolivia
Choquehuanca’s trip has the purpose of open better markets that go beyond the Free Trade Agreement signed with Mexico ten years ago.
India Inc. dreams of reaching US market through Mexico
18-Sep-2007 Trading Markets
A large number of Indian companies like Tata, Wipro, Ranbaxy and Reliance are dreaming to expand their presence in the US and vast Latin American market by investing in Mexico, through NAFTA and other trade pacts.
S. Korea set to speed up efforts for free trade pacts with Latin American nations
17-Sep-2007 Yonhap
South Korea is ready to accelerate its efforts to sign free trade agreements with Mexico and Mercosur, the country’s top economic policymaker said Monday.
Mexico’s President Calderon in India to boost bilateral trade, strengthen political ties
11-Sep-2007 IHT
India and Mexico on Monday signed an agreement to scale up trade and investment
Peru-Mexico to negotiate free trade agreement (FTA) in September
22-Aug-2007 LIP
Peru and Mexico will begin negotiations for a Free Trade Agreement (FTA) on September 17. Because Peru’s agricultural products do not directly compete with Mexican products, it is hoped that agreements will be reached.
Evaluation of the impact of NAFTA on manufacturing
9-Aug-2007 Scoop
The evidence is overwhelming: NAFTA has damaged the manufacturing industry in the US and Mexico. As the maquiladora industry thrives and human rights are continuously eroded in sweatshops across the globe, it is the responsibility of the US, the world’s most insatiable consumer, to call attention to this injustice in the manufacturing sector and correct it.
S Korea, Mexico agree to resume free trade talks
9-Aug-2007 Korea Times
South Korea and Mexico officially have agreed to resume their negotiations for a full free trade agreement (FTA), which is expected to contribute not only to economic ties but the political partnership between the two countries
Mexico in Mercosur ’essential’
1-Aug-2007 Buenos Aires Herald
Mexico’s entry to Mercosur is “essential,” President Néstor Kirchner insisted yesterday after a meeting with his Mexican peer Felipe Calderón in Mexico City.
Peru, Mexico extend economic agreement
31-Jul-2007 People’s Daily
Peru and Mexico have agreed to extend their current Economic Agreement, due to end on Dec 31 this year, until June 30 2008. Meanwhile, talks on a bilateral free trade treaty are set to be reopened in September in Mexico City.
Why they migrate
20-Jul-2007 PWW
In 2002 alone, 600 Mexican farmers per day were forced off the land due to NAFTA, by US agribusiness dumping subsidized food exports on Mexico. And in the past five years, more than 1,600 Mexican migrants have lost their lives in their attempts to find jobs in the US. 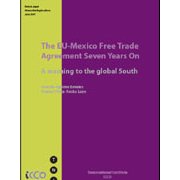 The EU-Mexico free trade agreement seven years on: A warning to the global South
16-Jul-2007 TNI
Seven years on, the impact of the EU-Mexico FTA is clear. Instead of the promised economic and social benefits, the treaty has left the Mexican state unable to implement policies to promote local small and medium size companies.
Is Mexico overlooking the EU ?
13-Jul-2007
Extract from introduction of dissertation entitled "FTA European Union - Mexico: An overview of the ’Global Agreement’ and impact since the start"
The SPPNA or “deep integration”
28-May-2007 alcaabajo
It’s really not a secret accord. On March 23, 2005, presidents George W. Bush of the United States, Vicente Fox of Mexico, and Prime Minister Paul Martin of Canada issued a joint declaration giving life to the Security and Prosperity Partnership of North America (SPPNA), also known as NAFTA-plus, or North American Free Trade Agreement plus other accords.
“Trade with Mexico is a big opportunity for India”
28-May-2007 Financial Express
Mexican minister of economy Eduardo Sojo says Indian companies should use Mexico, through its 44 FTAs, as a gateway to enter the US and the Latin American market.
Mexican workers call for a continental workers’ campaign for living wages and social justice
20-May-2007 ZNet
A coalition of Mexican unions has now proposed a strategy of struggle that could open up the door to a more class-wide and continental approach to union and workers’ struggles, starting in the three NAFTA countries.
India looks for key to Nafta in Mexico
17-May-2007 Economic Times
India is all set to sign a bilateral investment protection agreement (BIPA) with Mexico on May 21. This will be first such agreement with a member of the North American Free Trade Agreement (Nafta).
FTAA unlikely to become reality soon, Mexico says
11-Apr-2007
Mexican Economy Secretary Eduardo Sojo said the U.S.-led Free Trade Area of the Americas scheme is likely to remain stalled in the foreseeable future as negotiations between the United States and the leftist-dominated South America on the issue have been deadlocked for the past few years.
0 | ... | 320 | 340 | 360 | 380 | 400 | 420 | 440 | 460 | 480 | 500
Subscribe to bilaterals.org weekly