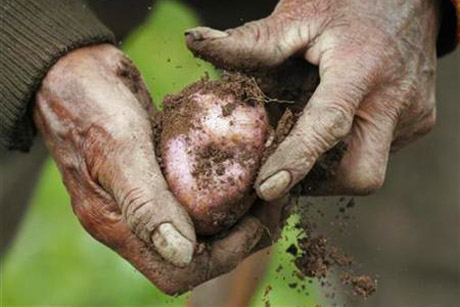 Complete opening of the market would put at risk the livelihoods of 8,700 potato farmers and a crop worth 900 million dollars covering 55,000 hectares, CONPAPA says. In addition, potato diseases could spread to other crops like tomatoes, eggplants, tobacco and peppers.

The Trans-Pacific Strategic Economic Partnership Agreement negotiations, which Mexico is to join in December, are threatening to eliminate the last defences of the country’s agricultural sector.

Farmers in the United States, one of the future partners in the treaty, have asked their government to negotiate flexibilisation of the phytosanitary measures applied by Mexico, which are the final barrier against free entrance of agricultural products that compete against local crops.

“Mexico is about to enter unfamiliar negotiations,” Timothy Wise, director of the Research and Policy Programme at the Global Development and Environment Institute at Tufts University near Boston, Massachusetts, told IPS. “I think the diagnosis is unfavourable for this country. The purpose of this treaty is to defend Washington’s agenda.”

“It is only seeking further trade liberalisation,” the expert said.

The Trans-Pacific Strategic Economic Partnership Agreement went into effect in 2006 with four original members: Brunei, Chile, New Zealand and Singapore. In 2007, negotiations got under way for the Trans-Pacific Partnership (TPP), a significantly expanded version of the treaty. In 2008, Australia, Peru, the United States and Vietnam joined the negotiations, and Malaysia joined in 2010.

There have been 14 rounds of talks on the TPP, the latest in the United States in September. The next round will be held in December in New Zealand, which Mexico will join. This step is anxiously awaited by the U.S. agricultural sector, which looks forward to a total opening of the Mexican market.

Mexico’s agricultural trade became wide open to Canada and the U.S. when the North American Free Trade Agreement (NAFTA) entered into force in 1994. However, there were some important exceptions to unrestricted entry of goods, and some non-tariff barriers were established, such as phytosanitary measures.

Mexico’s average tariff for agricultural products from outside NAFTA is 21.5 percent. But imports of coffee and poultry products are completely banned, and different products are excluded from other trade agreements with countries or blocs.

Potatoes are an especially protected crop; Mexico only allows entry of potato products from the U.S. and Canada to designated border areas. This crop was left out of the agreement because of the lack of competitiveness in production between the three countries.

At first Mexico applied a tariff of 272 percent on potato imports from the United States, until 2002, when the tax was replaced by phytosanitary barriers to control plant diseases, like nematodes.

In March 2002, Mexico City and Washington signed a market access agreement that is still in effect, allowing imports of fresh U.S. potatoes to a 26-km wide border zone in Baja California, Sonora, Chihuahua, Coahuila and Tamaulipas, the five states on the border with the United States.

Potato farmers are accusing the government of using them as a bargaining chip for acceptance in the TPP. Under U.S. pressure, Mexico might allow potato imports throughout the country in return for joining the negotiations in New Zealand.

“No one has consulted us, unlike in negotiations for other treaties,” Cecilia Ríos, general manager of the National Confederation of Potato Producers (CONPAPA), told IPS. “Ever since 2008, the United States has been pressing for total access. But as they did not comply with phytosanitary protocols, they were not allowed in.”

Complete opening of the market would put at risk the livelihoods of 8,700 potato farmers and a crop worth 900 million dollars covering 55,000 hectares, CONPAPA says. In addition, potato diseases could spread to other crops like tomatoes, eggplants, tobacco and peppers.

In contrast to what happened in Mexico, the government of President Barack Obama did hold public consultations on the TPP in the United States.

The Office of the U.S. Trade Representative (USTR) announced Mexico’s plans for incorporation to the agreement on Dec. 7, 2011. Interested parties had until Sept. 4 to comment, and 17 days later a hearing was held in Washington, D.C. The U.S. National Potato Council was one of the respondents.

“Many of the obstacles raised by Mexico to justify their failure to honour commitments in the 2003 agreement have been phytosanitary in nature, are not based on sound science, and do not justify trade restrictions,” said John Keeling, the Potato Council’s executive vice president, in a letter to the USTR dated Aug. 17.

“A lack of progress on the potato issue would call into question Mexico’s commitment to be a responsible partner in the TPP agreement,” Keeling said.

Other agricultural sectors have also made demands. For instance, the Northwest Horticultural Council (NHC) has asked for phytosanitary permission to export fresh peaches and apricots under a protocol system, without the need for Mexican inspectors to oversee the programme.

NHC members argue that the protocol they propose to control the oriental fruit moth (Grapholita molesta) is used for peaches exported to Mexico and peaches and apricots sent to Canada, according to an Aug. 28 letter to the USTR signed by Mark Powers, the NHC vice president.

“Oriental fruit moth has never been detected in stone fruit shipments to Canada, or in apricots to Mexico,” he said.

“The United Status may be concerned about losing something, but all Mexico can do is lose. With another strategy, Mexico could open up spaces for government policies, but that is not going to happen,” said Wise, who has studied the situation in the Mexican countryside for years.

“This is a non-negotiable issue, it is about more than trade. We are going to lobby Congress to explain the problems and the situation,” said Ríos.

The food health and safety service attached to the Agriculture Ministry has records of over 1,000 shipments of U.S. potatoes refused entry because they were contaminated with quarantine pests – organisms capable of causing economic or environmental harm – that have not been previously detected in Mexico.

CONPAPA has sponsored a study on the impact of the potato trade in the border zone, and will publish its results in the coming weeks.

The NHC has requested that the USTR and the U.S. Department of Agriculture’s Foreign Agricultural Service “work with the Mexican government to make the regulatory change” that will allow fruit access.