Why they migrate
20-Jul-2007 PWW
In 2002 alone, 600 Mexican farmers per day were forced off the land due to NAFTA, by US agribusiness dumping subsidized food exports on Mexico. And in the past five years, more than 1,600 Mexican migrants have lost their lives in their attempts to find jobs in the US.
US offers Canberra a Doha fallback over trade
28-Jun-2007
Australia could be invited to join the North American Free Trade Agreement as part of a strategy among Asia-Pacific nations to deal with the collapse of world trade talks.
US asks for FTA renegotiations in seven areas
18-Jun-2007
The US has officially requested additional negotiations on an already concluded free trade agreement with Korea. It wants to renegotiate seven sectors — labor, environment, essential security, pharmaceuticals, government procurement, harbor safety and investment. But critical issues that could hurt the balance of negotiations like cars and the inter-Korean Kaesong Industrial Complex are not on the agenda, the government believes.
NAFTA claim dismissed, dicey clause remains
15-Jun-2007
A seven-year legal battle by the US postal carrier United Parcel Service of America (UPS) against Canada, brought under a controversial free trade agreement, has been dismissed, but advocacy groups say a provision that allows corporations to sue for lost profits should be permanently dropped.
Canada Post NAFTA win sets precedent
14-Jun-2007
A landmark NAFTA decision this week dismissing allegations that Canada Post is competing unfairly has significantly restricted the rights of foreign investors to elbow their way into markets served by Crown corporations and other government enterprises.
Canada Post claims NAFTA victory
12-Jun-2007
Canada Post said Tuesday it has defeated a NAFTA challenge from United Parcel Service of America Inc. that alleged the Crown corporation engages in unfair competition. 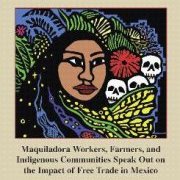 NAFTA from below: A review
28-May-2007
The full impact of the North American Free Trade Agreement on the working people of Mexico, the US and Canada has yet to be assessed, but this slender volume makes a major contribution to our overall understanding of this disastrous economic treaty that was imposed on the people of all three nations by governments which routinely subvert democracy in the service of big capital.
The SPPNA or “deep integration”
28-May-2007 alcaabajo
It’s really not a secret accord. On March 23, 2005, presidents George W. Bush of the United States, Vicente Fox of Mexico, and Prime Minister Paul Martin of Canada issued a joint declaration giving life to the Security and Prosperity Partnership of North America (SPPNA), also known as NAFTA-plus, or North American Free Trade Agreement plus other accords.
NAFTA: Kicked up a notch
26-May-2007 Spero News
The expansion of NAFTA into the Security and Prosperity Partnership reveals the road ahead for other nations entering into free trade agreements. It is not a road most nations — or the US public — would take if they knew where it led.
NAFTA Chapter 11 investor-state disputes
23-May-2007 CCPA
Table of all disputes and their status as of 1 March 2007
Dealing with domestic conflicts in FTA negotiations: Lessons from the Korea-Chile FTA and NAFTA
22-May-2007 PECC
The most significant constraint in FTA negotiations is not international negotiation between two governments, but domestic negotiation with various domestic constituencies, such as organized farmers and labor, the national assembly, NGOs, etc. This paper analyzes the domestic conflicts that arise in FTA negotiations in the Asia-Pacific region, particularly focusing on the US, Japan, China and Korea.
Mexican workers call for a continental workers’ campaign for living wages and social justice
20-May-2007 ZNet
A coalition of Mexican unions has now proposed a strategy of struggle that could open up the door to a more class-wide and continental approach to union and workers’ struggles, starting in the three NAFTA countries.
Starving the poor
17-May-2007 The News International
The connection between instability in the Middle East and the cost of feeding a family in the Americas isn’t direct, of course. But as with all international trade, power tilts the balance.
India looks for key to Nafta in Mexico
17-May-2007 Economic Times
India is all set to sign a bilateral investment protection agreement (BIPA) with Mexico on May 21. This will be first such agreement with a member of the North American Free Trade Agreement (Nafta).
Canada: Free trade with the US has failed to close the income gap or create quality jobs
11-Apr-2007 The Canadian
The notion that NAFTA has been good for average Canadians, Americans and Mexicans is a lie. The truth is that NAFTA has been responsible for growing poverty, the creation of a new underclass called the “working poor,” and the concentration of wealth in the hands of fewer and fewer people.
Mexico, US presidents promise to extend free trade
15-Mar-2007 People’s Daily
Presidents Felipe Calderon of Mexico and George W Bush of the United States held a series of meetings on Wednesday, promising to extend the free trade agreement between the two nations.
Don’t repeat NAFTA disaster, trade experts warn
5-Mar-2007 Workday Minnesota
The North American Free Trade Agreement, NAFTA, has been a disaster for workers and families, and even social institutions, in the three participating nations — the United States, Canada and Mexico — labor experts from the three countries told Congress. Not only that, they warned that the pending US-Korea Free Trade Agreement would be a repeat of that NAFTA fiasco.
Mexico: Staple foods at risk from free market
27-Feb-2007 IPS
When the Mexican government negotiated the North American Free Trade Agreement (NAFTA), in force since 1994, it estimated that 14 years of safeguards for its maize and beans would be enough time for local production of these crops to become competitive. But things did not work out that way.
US inspectors to examine trucks on Mexican soil
23-Feb-2007 Houston Chronicle
US safety inspectors will be allowed to inspect trucks on Mexican soil before they enter the United States under a program announced on Thursday that officials said will remove the last barrier to the long-delayed opening of US highways to Mexican truckers.
Policy space for Mexican maize: Protecting agro-biodiversity by promoting rural livelihoods
16-Feb-2007 GDAE
With maize trade scheduled to be fully liberalized under NAFTA in 2008, many farm groups are calling for a renegotiation of the treaty’s agricultural provisions to prevent further damage. This analysis examines the room for alternative policies in Mexico under existing economic and environmental agreements, including NAFTA. It concludes that the Mexican government retains access to many useful policy instruments that could promote rural livelihoods while arresting the losses of important maize diversity. What is lacking is the political will to make use of them.
0 | ... | 700 | 720 | 740 | 760 | 780 | 800 | 820 | 840 | 860 | 880
Subscribe to bilaterals.org weekly