Egypt and Turkey to sign free trade agreement
22-Dec-2005 Bahrain News Agency
Egyptian Minister of Foreign Trade and Industry, Rasheed Mohammed Rasheed, said a free trade agreement will be signed by Egypt and Turkey during next week’s visit of Turkish President Ahmet Necdet Sezer to Cairo.
Pakistan wants free trade agreement with US
1-Dec-2005
Pakistan is pressing for a bigger reward for its alliance with the United States in the war on terror, with the country’s Commerce Minister calling for a Free Trade Agreement that would open up the American market to Pakistani goods.
India Inc worried over Govt plan to ink more FTAs
27-Oct-2005 Hindu Business Line
The Government’s announcement to initiate free trade agreements (FTAs) with neighbouring economies, including ASEAN and Gulf countries, by 2006 has given Indian industry cause for concern.
China FTA to boost wool sales: report
10-Oct-2005 The Age
Australian wool producers would reap a $780 million windfall if barriers to trade with China were ripped down, a new report has found.
Philippines seeks sector-specific FTA with US
22-Sep-2005 Manila Bulletin
The Philippine government is pushing for a sector specific free trade agreement (FTA) with the US starting off with the garments sector to immediately take advantage of a duty-free privilege for garment exports and strengthen its presence in the US, the country’s biggest garment market.
In the trade zone: Georgians assess effects of CAFTA deal
18-Aug-2005 AJC
Georgia’s poultry industry is gearing up to ship more frozen chicken abroad under the Central American Free Trade Agreement, while parts of the state’s textile industry also stand to gain.
Official: CAFTA would hurt Mexico industry
18-Aug-2005 BusinessWeek
Mexico’s assembly-for-export industry, which has struggled to compete with China, will likely be hurt further by the proposed Central American Free Trade Agreement, officials said Wednesday. 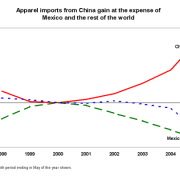 Can CAFTA save textile and apparel producers?
16-Aug-2005 EPI
The notion that 283,000 textile and apparel jobs will be created in Central America as a result of CAFTA is a pipedream.
Tariff rows may delay launch of SAFTA
19-Jul-2005 News from Bangladesh
Bangladesh, Pakistan and India continue to get locked in the niceties of negotiations on exchange of tariff concessions, particularly for competing products such as textiles at a time when less than six months are left for the agreement on South Asia Free Trade Area (Safta) of the seven-member South Asian Association for Regional Cooperation (Saarc) to come into operation.
Japan, RP agree on garments trade
17-Jul-2005 Manila Bulletin
While the Philippines and Japan still remained locked on three issues to finalize their Economic Partnership Agreement (EPA), both parties have agreed in principle for a zero for zero arrangement on the trade of garments and textile.
Bush seeks to sew up CAFTA support in NC
16-Jul-2005
Workers and lawmakers in the textile belt fear that the deal, which is the president’s trade priority, will send more production abroad.
’India under cheap textile imports threat’
7-May-2005
Though the end of the quota regime has made India a much sought-after destination in the textile sector, the industry here is reeling under fears of cheap imports from Sri Lanka and Bangladesh.
IT, biotech, pharmaceuticals, agro food are items for enhanced India-EU cooperation
3-May-2005 Assocham
The Associated Chambers of Commerce and Industry of India sees tremendous scope for enhancing economic ties with Europe and has mooted a four pronged strategy for expanding India’s trade basket with the enlarged EU in areas such as information technology & communication, biotech & pharmaceuticals, agro foods processing and textiles.
Big changes ahead in world trade
7-Jan-2005 The Nation
In Thailand, FTA-mania under the administration of Prime Minister Thaksin Shinawatra is likely to continue in 2005.
Signing of Qualified Industrial Zones Agreement (QIZ)
14-Dec-2004
On December 14, Israel, Egypt and the United States will sign the agreement leading to the establishment of Qualified Industrial Zones in Cairo, Egypt.
Egypt, Israel sign deal on free trade with US
14-Dec-2004
Egypt and Israel will sign a joint free-trade agreement with the United States in Cairo today
Tefron’s Yosef Shiran: Free trade agreement a death blow to local textile industry
12-Dec-2004 Globes [online]
Delta Galil Industries chairman Dov Lautman, currently in London, told "Globes" this morning that the free trade agreement with Egypt was not only an economic achievement, but also a major political one. "The agreement will contribute to Israel’s economy, and to political reality in the Middle East."
0 | 20 | 40 | 60 | 80 | 100 | 120
Subscribe to bilaterals.org weekly