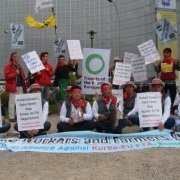 European and Korean social movements and civil society unite against the ‘Global Europe’ strategy and the South Korea-EU FTA
21-Sep-2007
On the occasion of the 3rd round of Free Trade Agreement (FTA) negotiations between South Korea and the EU taking place from 17th till 21st September in Brussels, Belgium, members of the Korean Alliance against Korea-EU FTA (KoA) and members from social movements and civil society organisations from Europe have come together to join forces and struggle together against the Global Europe strategy and the Korea-EU FTA.
Joint EU-Korea business statement
21-Sep-2007
From the Korea FTA Industry Alliance and BUSINESSEUROPE
EU hardens stance in trade talks with Korea
20-Sep-2007 Chosun Ilbo
Free trade talks between Korea and the EU have hit an unexpected snag after the EU turned from a generous negotiating partner in the first two rounds into a stubborn, picky one in the third round.
Korea-EU FTA: Delegates need to maintain unitary stance for negotiations
20-Sep-2007 Korea Times
A sudden influx of European pork will lead to Korea’s livestock industry crumbling.
South Korea, EU to hold 3rd round of free trade talks in Brussels
14-Sep-2007 Yonhap
South Korean officials say they hope to reach a deal by the end of this year.
Korea to send draft proposal on FTA with EU
27-Aug-2007 Chosun Ilbo
It will specify when and how much Korea is willing to open its agricultural sector, the most sensitive area in free trade talks.
BusinessEurope position on the EU-Korea free-trade agreement
25-Jul-2007
BUSINESSEUROPE would like to see an agreement based on full coverage, full reciprocity and effective market access for industrial goods, ambitious services liberalisation of as many sectors as possible, strong rules to foster and protect investments, and strong rules on trade facilitation, competition and public procurement.
EU demands greater access to South Korean agri market at FTA talks
23-Jul-2007 Asia Pulse
The EU claims there are considerable gaps between what Seoul is offering Brussels and what was agreed upon with Washington
Korea-EU FTA talks see differences over IPR & cars
21-Jul-2007 Chosun Ilbo
Already, the EU has shunned Korea’s request to include goods made in the inter-Korean industrial park in North Korea’s border city of Kaeseong in their potential FTA and requested Korea to introduce a system in which cafes and restaurants pay royalties to music producers and performers.
Discord among delegations in EU trade negotiations
19-Jul-2007
With the European Union and South Korea starting their talks on a proposed free trade agreement (FTA) in Brussels, Korean negotiators remain divided over how to open the country’s market to one of the world’s largest economic blocks. The cacophony represents the fact that the government has not put in enough effort to gather consensus before negotiations began and only pushes for the conclusion of the economic deal in a hasty way.
0 | ... | 90 | 100 | 110 | 120 | 130 | 140 | 150 | 160 | 170 | 180