EU sets Uyghur and Hong Kong conditions for investment agreement
16-Jul-2021 Hindustan Times
The conditions have been listed in a draft report prepared by foreign affairs committee of the European Parliament. 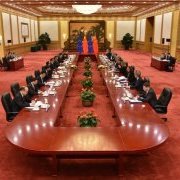 Unpacking an empty box? The EU-China Comprehensive Agreement on Investment
15-Jul-2021 SOMO
The recent tit-for-tat sanctions between the EU and China have cast a shadow over the deal’s future and frozen talks for the time being. But if the agreement reaches the finish line, what is at stake?
CAI rears its ugly head again
6-Jul-2021 Euro Intelligence
Hope for the EU-China comprehensive agreement on investment (CAI) springs eternal, after Emmanuel Macron and Angela Merkel had another call with Xi Jinping.
Taking the EU reins, Slovenia plans to press ahead on China investment deal
1-Jul-2021 South China Morning Post
Technical work will continue to ready the deal if it is enacted, even though the European Parliament froze its consideration after Beijing sanctioned several of its members, Slovenian ambassador says.
China’s embrace of sanctions costs it an investment deal with EU
21-May-2021 Bloomberg
European lawmakers overwhelmingly approved a resolution to withhold ratification of the investment deal with China, so long as its “baseless and arbitrary” penalties were in place.
European Parliament to vote on freezing China deal
19-May-2021 Politico
Draft calls on EU to work with US on China, and to plan deals with Taiwan.
EU says not seeking escalation with China, working on investment deal
10-May-2021 Reuters
The situation is less dramatic than people seem to think. The EU is still working very closely with China’s Ministry of Commerce, the bloc’s ambassador in Beijing said.
EU-China investment deal ’not exactly a deal’
7-May-2021 The Jakarta Post
A long-negotiated investment agreement between EU and China was more of an "intention than a deal and it could be a long time before it became a reality, an EU commissioner said.
Europe’s China gambit
10-Apr-2021 Project Syndicate
Trade and investment agreements cannot transform China into a Western-style market economy or turn it into a democracy.
EU-China trade deal is a Trojan Horse sellout
30-Mar-2021 Australian Financial Review
The short-sighted German-driven agreement betrays the European project and poses a major economic and political problem for the rest of the West.
0 | 10 | 20 | 30 | 40 | 50 | 60 | 70 | 80 | 90
Subscribe to bilaterals.org weekly