Europe trade deal could hit Indian generic drugs
26-Apr-2010
It took two years of secret suffering and gut-wrenching diarrhea to make Lumkile Sizila face the fact that he had HIV.
Civil society groups in India and across the world protest against EU-India FTA
21-Apr-2010
Civil society and public health groups from India, Brazil and several other countries today vehemently objected to the proposed India-European Union Free Trade Agreement (FTA).
GTPI petition against the FTA between European Union and India
2-Apr-2010
In light of the meeting with members of the International Trade Commission of the European Parliament, scheduled for April 9th at the office of the Brazilian Interdisciplinary AIDS Association, the Working Group of Intellectual Property (GTPI) decided to promote a on-line petition (in Portuguese and English) as form of protest against the negotiations of the Free Trade Agreement (FTA) between India and European Union. 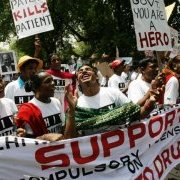