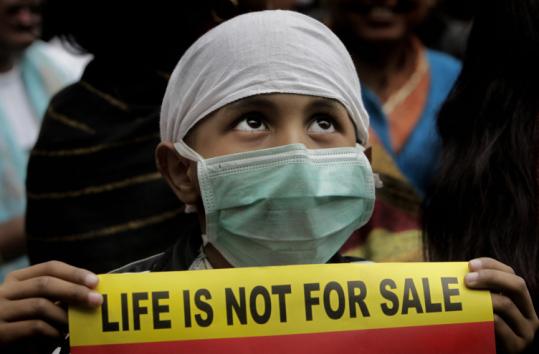 NEW DELHI (AP) — Thousands of people with HIV and cancer marched through the streets of India’s capital Wednesday to protest a planned trade deal with the European Union that they claim would restrict access to affordable medicines.

The protesters say that under the terms of the new free trade agreement being negotiated by India and the EU, generic versions of lifesaving drugs would no longer be cheaply available.

Holding placards and shouting, "We want to live," about 3,000 protesters marched through central New Delhi before holding a meeting near Parliament.

Indian officials declined to comment on the status of the negotiations underway in Brussels.

Health activists and people living with HIV had traveled from as far away as Thailand and Indonesia to participate in the rally.

Activists also warned that provisions in the deal would block generic versions of drugs from entering the market, even if the drugs’ patents had expired.

"These are all ways to hinder competition from Indian drug manufacturers who make cheaper generic versions," Anand Grover, the United Nations Special Rapporteur on the Right to Health, told journalists after the rally.

The restrictions would affect not just India, but people in developing countries that depend on Indian manufacturers for drug supplies.

"India is the pharmacy of the developing world," Grover said, adding that the restrictive provisions of the agreement would be "a colossal mistake."

Many of the rally participants said the effects of restrictions on drug production in India would be felt sharply in Asia and Africa.

"These drugs are our lifeline. We have seen many deaths among friends and family because they could not afford imported medicines," said Rajiv Kafle, an HIV activist who had traveled 30 hours by bus from Nepal to participate in the rally.

"We have a simple message for the Indian government: Don’t trade away our lives in the EU-India FTA," he said.

Kafle’s views were supported by Malaysian lawmaker Charles Santiago, who said many Asian countries depended on medicines from India.

"If India caves in, then the pressure on Asia to access affordable medicines for HIV and Hepatitis C sufferers would be tremendous," Santiago said.