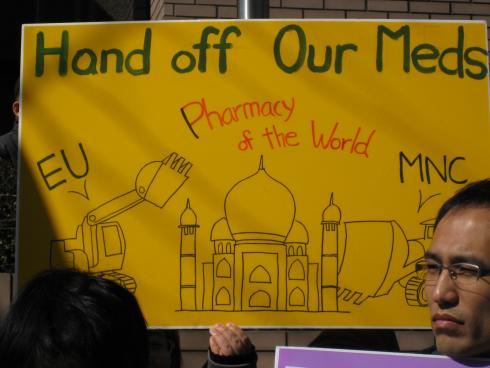 Stop the India-EU FTA, Decimator of the ’Pharmacy of the World’!

The Korea-EU FTA, which Shall Restrict the Constitutional Rights of Koreans, Must Also Be Dismantled

The European Union is shrugging off its previous flexible FTA towards the pursuit of a new FTA policy attempting to aggressively disable all tariffs and non-tariff barriers to trade. The first targets for this new FTA policy are the Republic of Korea and India. The Korea-EU FTA and India-EU FTA are, like the Korea-US FTA, comprehensive and aggressive liberalization policies geared towards the benefit of multinational corporations. The North American Free Trade Agreement and the Central America Free Trade Agreement has had devastating effects. The rose-tinted futures promised by the developed nations are nowhere to be found and these free trade agreements have only led to increases in food and medicine prices, the breakdown of public services, and the loss of sovereignty.

This spring, the free trade agreement in talks between India and the European Union is notable for being a death knell for over citizens in over 120 developing nations. Because of the India-EU FTA scheduled to be signed in March, India’s contribution as ’The Pharmacy of the World’ is about to disappear. India has complied with the TRIPS agreement since 2005 but has limited its standard of patents when clinical effects are proven to be significantly better than that of previous medicines and was able to continue being the Pharmacy of the World. Above all, the price of India’s generic medicines are only 5 10% of those of multinational corporations being expensively sold through patents or data exclusivity. India also can produce variations of formulations fit to the needs of the patients, and is also selling medicine, such as pediatric AIDS medications considered unprofitable by multinational drug corporations. 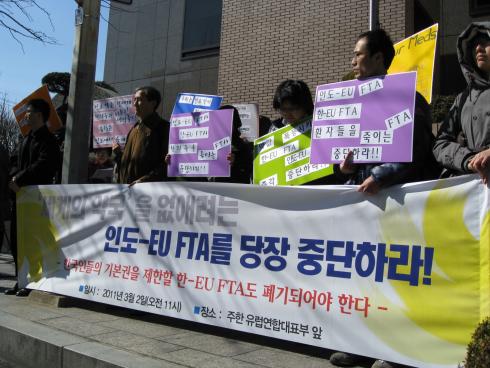 However, with the signature of the India-EU FTA and the advent of data exclusivity, India will have much difficulty in developing, producing and exporting generics. Those who have depended on generics made in India will be pushed to the brink of death. The India-EU FTA is a deal with the lives of patients spread over 120 countries.

Data exclusivity refers to the exclusivity given to original medicines by delaying the marketing of generics by preventing source information on safety and efficacy, given to generics manufacturers on market approvals. When this is given, even unpatented medicines or those with lapsed patents are given sales exclusivity, preventing their production and export, or even for public use of patents such as through compulsory licensing. Whether its through patents or data exclusivity of original medicines, patients will suffer the same. While data exclusivity has a shorter time period than patents, it can be obtained through a much simple process. What the multinational drug corporations are after is to obtain higher profit by more easily obtaining monopolies on new drugs which neither adhere to India’s patent standard or are more clinically effective. 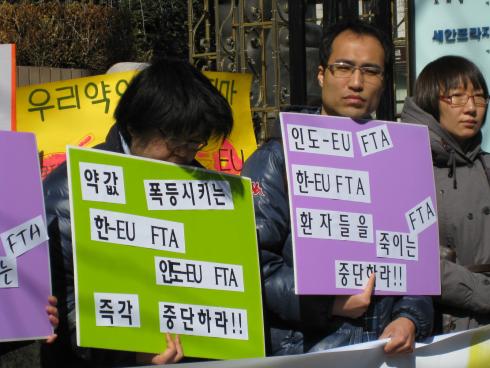 India provides for 20% of the world generics market. In particular it provides 90% of the developing world’s AIDS medicine supply and 50% of the world’s AIDS medicine needs. Analyzing AIDS medication supply in 115 countries by The WHO, Global FUND and UNITAID, India took up over 80% of the provision for generic AIDS medications for these international organizations(donor-funded purchase) since 2006, with the number at 87% in 2008. If adding Indian AIDS medications provided by public medical organizations in Thailand, Brazil, South Africa and Nepal(government-funded purchase), the proportion exceeds 80%. Pediatric AIDS medication is also largely provided by India, at 91% of the market.

Koreans also need Indian generics. We have experienced firsthand the harsh reality of being pushed into the streets because of the price of medicine. Leukemia medication Glivec is available in a generic India-produced version called Veenat at a twentieth of the cost. A first antiretrovirals costing a million to a million and a half won (900 1400 dollars) a month in Korea costs less than a hundred dollars in its generic Indian version. Even today there are patients who are buying generic Indian medicines because the cost of originals are too high. Can we truly comprehend the desperation of a patient who, when confronted with the refusal of a doctor to prescribe medication because of restrictions on import, thinks of resorting to drug smuggling? India is a last safe haven for Korean patients. 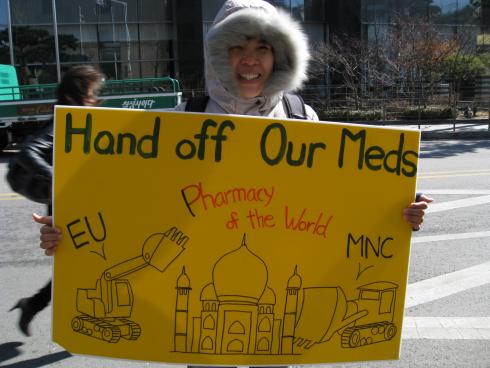 Our constitutional rights, as with the Korea-US FTA, will fall into the hands of multinational corporations, as they have with this Korea-EU FTA. The Korea-EU FTA has opened the area of public service to multinational corporations. With this FTA, post offices and waterworks, broadcasting and telecommunication companies are opened for multinational corporations’ profit. It goes without saying prices in these areas will rise. Intellectual property rights will strengthen and copyright extends for twenty more years, and there will be no way to shorten medicine patents or terms for data exclusivity. Access to information will be restricted and medicine prices will be difficult to maintain. Aside from this, the FTA with EU also resembles that with the US, making it possible for the former to enable the import of European beef from the very source of mad cow disease. The fall of Korean agriculture is inevitable. European agricultural products are kept artificially cheap through high government subsidies, and their Korean equivalents will suffer. When the Korean countryside has shown to be devastated by foot-and-mouth disease, signing this agreement is to sign the death warrant for our farmers.

The Korea-EU FTA must be dismantled. And the lives of patients in over 120 countries are on the line regarding the India-EU FTA. What will devastate the Pharmacy of the World must also be stopped.

Center for Health and Social Change

Korean Alliance against the Korea-US FTA

National Association of Professors for Democracy